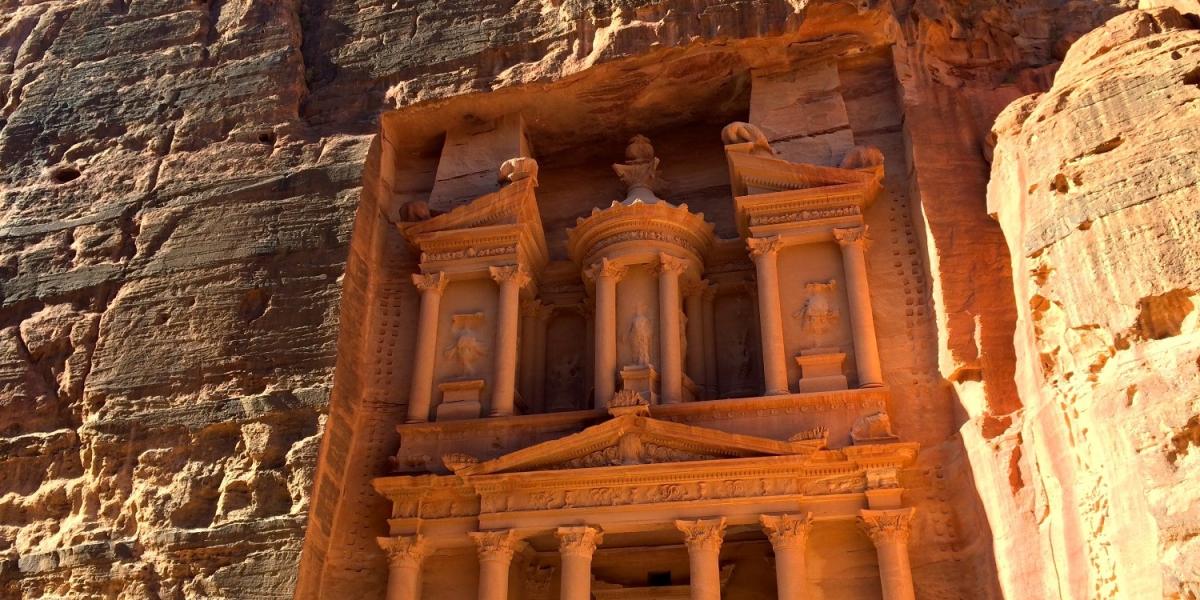 This is a truly unique destination that parents and kids will never forget – a place where you can live the life of desert nomads, walk in the footsteps of Moses, scramble over the ruins of ancient civilisations, float in the Dead Sea and snorkel off a boat in the Red Sea. Just make sure you all watch Lawrence of Arabia, Indiana Jones and the Last Crusade and The Martian before you arrive.

Yet fascinating though it is to see sites mentioned in the Bible (the brook where Jesus was baptised, the fortress where Herod beheaded John the Baptist), it’s not all about the past in Jordan. Amman the capital is a modern, diverse city with plenty going on, while the desert offers ample opportunity for adrenaline-fuelled adventures. And Jordanians are some of the friendliest people you could ever hope to come across.

At the time of writing, there were no security issues around travelling to Jordan.

Things to do with kids in Jordan

Don’t miss the wonder that is Petra, a city carved out of the rocks by the Nabataeans in the 6th century. There’s a lot of walking and a lot of steps, but camel, horse and donkey rides can save on the legwork as you admire the ruins and there are trinket stalls and tea rooms to stop off en route.

Spend a day in the wonderfully preserved Roman city of Jerash - in the high season its hippodrome hosts gladiator shows and chariot rides at 45 minutes long, they're just the right length for young spectators. See our feature on an October half-term family trip to Jordan including a chariot race.

Venture into the otherworldly desert and mountain landscape of Wadi Rum, where TE Lawrence was once based. As well as camping overnight, you can explore the dunescape by 4WD, see ancient petroglyphs, ride camels and try sandboarding.

Experience the weirdness of floating on water during an overnight stay at the Dead Sea, but take a bottle of water to throw over kids if they get any in the eyes. There are plenty of hotel resorts and beaches here, plus a waterpark.

Hike amidst some of Jordan’s stunning scenery, choosing a trail to suit your family’s abilities, and bringing water, sunscreen and hats, and extra clothing (the temperature drops dramatically as the sun goes down). Nature reserves great for hiking including Aljoun and Dana; the latter is the starting point for a six-hour hike to the wonderfully remote Feynan Ecolodge. In the Mujib Nature Reserve, canyoning and climbing is becoming ever more popular.

Spend a pleasant couple of days in the thriving city of Aqaba with its modern resorts, marinas and waterparks, and the chance to try wind-surfing, waterskiing and the like in the Red Sea. You can also tour the city in a horse and carriage or rent a bike, before hunting out souvenirs in the souk or relaxing in a pavement café.

Discover the capital Amman, a thoroughly modern Arab city with plenty of things to do and see, shopping malls to splurge and stay cool in, and green space to run around in. The King Hussein National Park offers easy distractions including a playground, and you can tick off museums in the same outing – this where locals go for fresh air and a wander around King Hussein’s Automobile Museum to lust after his many cars! There’s also the Children’s Museum with hands-on activities and a planetarium, the Archaeological Museum, and Jordan’s Museum of Popular Traditions, stuffed with traditional Jordanian costumes. After sightseeing, cool down at the Water Park, an oasis of slides and palm trees, or people-watch on pedestrianised Al-Wakalat Street, where local families sit at outdoor cafés to watch the world go by. Lastly, head for Amman’s Citadel to tour the city’s ruins, including the impressive Roman Theatre.

Regional food is delicious - your kids may already love houmous, but the Jordanians will show them how the dish should really be done (and how it should be presented). Lamb and chicken are also popular, with garlic and mint the most common seasonings. You’ll also come across sharwma (pitta sandwiches with lamb or chicken) and the delicious national dish mansaf- lamb cooked in yoghurt sauce and served on rice with almonds and pine kernels. Book a cookery lesson at Petra Kitchen in Wadi Musa and you can even replicate some of your fantastic culinary experiences at home.

The presence of lots of rice and delicous fresh bread means you shouldn’t struggle too much on family holidays, even with fussy eaters. Falafels are a great and very nutritious snack available everywhere. The large international hotels serve the usual global dishes, often as part of a buffet.

Fruit and fruit drinks are also readily available, and locals drink seemingly endless cups of mint tea and variations also including sage or cardamon. Alcohol is not available everywhere, but larger international hotels all have bars. Don’t drink the tap water.

When to go to Jordan

For a small country, Jordan has an extraordinary range of climates, including snow in some areas in winter. Average daytime maximum temperatures in Amman range from 12.6°C in January to 32.5°C in August. The best times to schedule family holidays here are spring (March–May) and autumn (Sept–Nov), when daytime temperatures aren't too extreme. April is probably the best month of all, with warm temperatures and wildflowers in bloom.

Avoid high summer (July and August), when the weather in the humid Jordan Valley is oppressive - it feels like you're trapped in an airless oven, with suffocating daytime highs well in excess of 36°C.

Winter can be surprisingly cold and the deserts can be freezing, especially at night, so if you do come at this time, bring plenty of warm clothes and a windproof and waterproof jacket.

The month of Ramadan is a time when visitors should not eat, drink or smoke in public during the day so it's a tricky time to visit, especially with children.

A child playing on the ruins at Jerash

Jordan is probably a cheaper option for family holidays than you imagine, with flights starting at less than £200 depending on the time of year and a decent three-course meal available for around £10. Flight-inclusive prices on adventure trips start at £799 for adults, £669 for children.

Flying time5hrs All flight times are based on flights from UK London airports, to the capital or nearest destination airport.

Carbon footprint3.18 CO2 Estimated tonnes of CO2 produced for return flights for a family of four.

Places where mums can grab some ‘me’ time and a little pampering while also enjoying a break with the kids.
Find out more

Georgina and son discover history with a vengeance in the compelling Arab nation.
Find out more

Rhonda hunts down the best eco safari lodges and other environmentally friendly lodgings for families.
Find out more

Rhonda gives us the low-down on winter sun without a long flight.
Find out more
Best places to stay