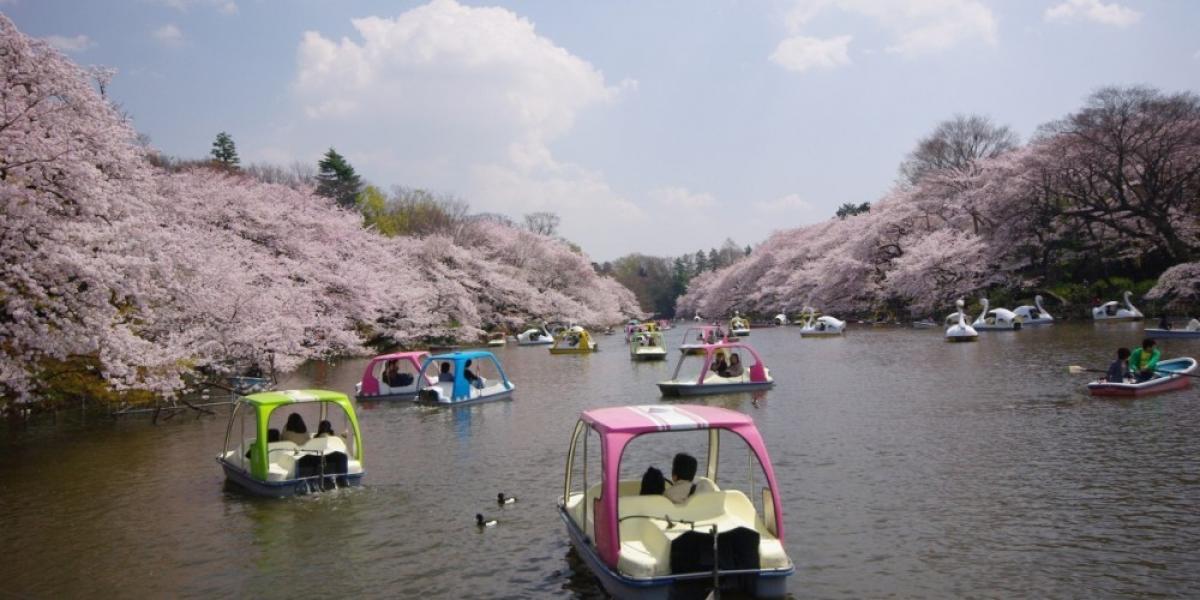 Visiting the Land of the Rising Sun is a unique, often surreal experience. The familiar images – Hello Kitty, Playstations and tiny hotel pods – are just one facet of this beautiful and ancient land. There are also blossom festivals to delight the senses, temples, gardens and palaces to dazzle the eyes, manga studios to visit, robot shops to ogle, places where you can eat 17 types of seafood in one sitting, islands to hop the traditional way, on miniscule wooden fishing boats, and the bullet train to whizz you between all these wonders.

The cliché ‘land of contrasts’ doesn’t begin to capture this dizzying land, but while adults can find it all rather confusing, many children instinctively ‘get’ Japan, especially teens. Indeed, this is a great place to bring offspring who are reaching that age when it’s uncool to go on family holidays with Mum and Dad.

The Japanese have a reputation for their politeness and in major cities most will welcome you and help you in any way they can, even if their English isn’t brilliant. Outside urban centres, you may find people shyer and more wary, but not unfriendly. Smiling and saying Konnichiwa usually helps break the ice, but it’s also useful to master at least a few more basic Japanese phrases to smooth your stay.

Things to do with kids in Japan

See the country’s fantastic children’s attractions: in Tokyo alone, there’s the Tokyo Disney Resort (Tokyo Disneyland and DisneySea), an awesome blend of Americana and Japan that leaves kids lit up like lightbulbs; the surreal, great fun, indoor Namja Town, based on the adventures of a cat called Navajo; and the hugely popular Kidzania, an ‘edutainment town’ where children can take on ‘real’ jobs, including operating on one another, presenting the news, flying a real (decommissioned) aircraft with a simulator, or catching robbers.

Just south of Tokyo, Yokohama Anpanman Children’s Museum is an interactive experience devoted to the eponymous cartoon character, who has a head made of bread that is eaten by characters in peril before being re-baked every night.

As the focal point of the world’s biggest urban conglomeration (Greater Tokyo), Tokyo itself is overwhelming and difficult to find your way around, and as such best tackled with older kids. The various sightseeing tours run by Hatobus (by bus, foot, train and/or boat) can make it more manageable; some even include pick-up and drop-off at various hotels. The city’s ‘Big Three’ sights are the Tokyo Tower with its panoramic views as far as Mount Fuji, the atmospheric Imperial Palace with its moats, 17th-century walls and gates, gardens and lovely Nijubashi Bridge (note that you must apply in advance, via the website, to join an English-language guide tour of the inner palace grounds), and Asakusa and its Buddhist temple Senso-ji (and neighbouring carnival complex), reached by boat ride along the Sumida river.

Then there’s Meiji-jingu, a major Shinto shrine set within a city forest, and beautiful Tokyo Bay (best seen from the Seaside Top observatory deck 150m up the World Trade Center Building). Take a waterbus across the Bay to the new leisure island of Odaiba with its replica of the Statue of Liberty, its park (with a huge ferris wheel, an aquarium, a bird sanctuary and lots of cherry blossoms in spring), its shopping malls (one of them Venice-themed) and its urban (non-swimming) beaches. Odaiba is also home to Miraikan, the National Museum of Emerging Science and Innovation, with attractions including data from seismometers across the country (showing it constantly vibrating) and the Honda robot. Museum staff can explain exhibits and their scientific background in English. There’s also the Museum of Maritime Science, full of hands-on experiences including the chance to canoe and ride in engine-powered rubber boats.

Other big hits in Tokyo with teens include the dazzling neon jungles of the shopping and entertainment districts of Shibuya and east Shinjuku by night, and the hip shopping area of Harajuku, where, on Sundays, youth culture groups stake out their territories around Yoyogi Park. Older kids might also enjoy experiencing more traditional Japanese culture by attending a tea-ceremony at the gorgeous Happo-en Gardens, where you can also admire the oldest known bonsai trees in existence (some about 500 years old).

Head south-west of Tokyo, to Osaka, for one of the world’s largest aquariums, Kaiyukan, which prides itself on its respect for the natural environment. The aquarium is in Tempozan Harbour Village, where you’ll also find one of the world’s biggest ferris wheels (the colour of which changes according to the weather forecast for the following day), a ‘festival market’ combining restaurants, food booths and shops (including toy stores) with street performance and entertainment spaces, a reproduction of Columbus’ ship the Santa Maria, offering day, night and dinner cruises, and the Suntory Museum, with an art gallery and an IMAX cinema.

Your kids won’t let you overlook that fact that Osaka is also home to Universal Studios Japan, offering many of the same rides as its namesake in Orlando, including The Amazing Adventures of Spider-Man and Shrek’s 4D Adventure.

Head south-west of Tokyo, to the old capital Kyoto, ringed by lovely temples, gardens and palaces. An incredible 17 of them are World Heritage sites, including the famous, glimmer-gold Buddhist pavilion of Kinkaku-ji.

Get a total change of scene on family holidays by discovering Okinawa, Japan’s unspoilt and spectacular semi-tropical south-west islands, where you might take your kids hiking in the mountains or snorkelling among coral reefs. You can fly there from major cities or take a 25hr ferry from Tokyo harbour, with accompanying dolphins almost guaranteed. If you do fly (including between the different islands), you should buy a flight pass before you get to Japan. Otherwise, ferries also run between the islands.

Head up into the mountains for some first-class skiing. Westerners are usually surprised to learn that there are more than 600 ski resorts in Japan, with some of the most reliable snow anywhere, fantastic facilities and a long season. From Tokyo, you could take the train to the stunning Japan Alps National Park, where, after treating your little ones to a day on the slopes, you can soothe your aches away in style in an onsen (hot spring). Or west of Tokyo and north of Osaka, Shiga Kogen consists of 21 interlinked resorts, and is also famous for the snow monkeys (Japanese macaques) in Jigokudani Yaenkoen Park, where you can watch the creatures sit or swim in the hot springs.

For more on skiing in Japan, especially Hokkaido, see also our feature Skiing in the Far East.

Although sushi and tempura are familiar to most of us, one of the greatest pleasures of family holidays in Japan is discovering the full, exotic range of Japanese food and the rituals involved in eating out here. Children love slurping noodles in a mall diner and picking away at a bento box (usually rice and a number of tiny side dishes including meat, fish, tofu, eggs, vegetables and fruit) in a train. Food in Japan is an adventure – it’s about the preparation, the way of eating and the textures as much as the flavour.

Big cities have their fair share of Western and both international and native fast-food options. It is possible to eat fairly cheaply in Japan, especially if you make lunch the main meal of the day (prices rise dramatically for dinner) and stick to noodle bars or take-out bento boxes. Department-store food halls are an eye-opening experience, if not a money-saving option (unless you cheekily fill up on free samples!).

When to go to Japan

Japan has the same basic seasons as Europe, with spring the time to schedule family holidays if you want to view the glory of the country’s celebrated plum and cherry blossoms. Exact timing depends on the type of tree and the region (some start as early as January, others can be admired as late as June). Take the family to a cherry blossom festival, perhaps on the northernmost island of Hoikkaido, or in Okayama in the westernmost part of Honshu.The latter is host to the Tsuyama Kakuzan Koen in early April, which features more than 5,000 illuminated trees in full blossom, tea ceremonies and Japanese music.

Alternatively, combine a visit to see the blossoms with the Kodomo No Hi (Children’s Festival) on 5 May, which includes kite-flying amongst the blossoming trees. Do, however, bear in mind that during ‘Golden Week’ (about the last week April to around 5 May), a popular holiday among Japanese, airports and train stations are very busy.

June–Aug can be very rainy, except on the northernmost of the four main islands, Hokkaido. Hokkaido also remains cooler and less humid than the mainland in July and Aug. Autumn (Sept–early Dec) is the very best time to come: cooler, with spectacular foliage (kouyou) and lots of festivals, from harvest thanksgivings to Halloween.

Winter (Dec–Feb) isn’t too cold, and Jan and Feb are good for skiing in Japan.

Family holidays in Japan can be an expensive proposition, but you can save money by doing your research and planning ahead (for instance, by buying foreigner-only passes for internal train and air travel; see above).

As a guide to what to expect, you’ll pay about £200–300 for a five-star hotel room in Tokyo and about £15 a head for a meal in a moderate restaurant. A 2-day 2-park Disney Resort pass for a family of 4 including one teenager and one younger child will set you back about £250. Ryokans vary widely from about £50 to £750pppn, with the average being about £100pp and those with onsen costing more.

Japanese currency is the Yen. Note that Japan is still largely a cash-based society and that you need to always ask in advance if you’re able to use your credit card in specific shops, restaurants or hotels. Like the Japanese, you will find yourself carrying relatively large amounts of cash around.

Flying time12hrs All flight times are based on flights from UK London airports, to the capital or nearest destination airport.