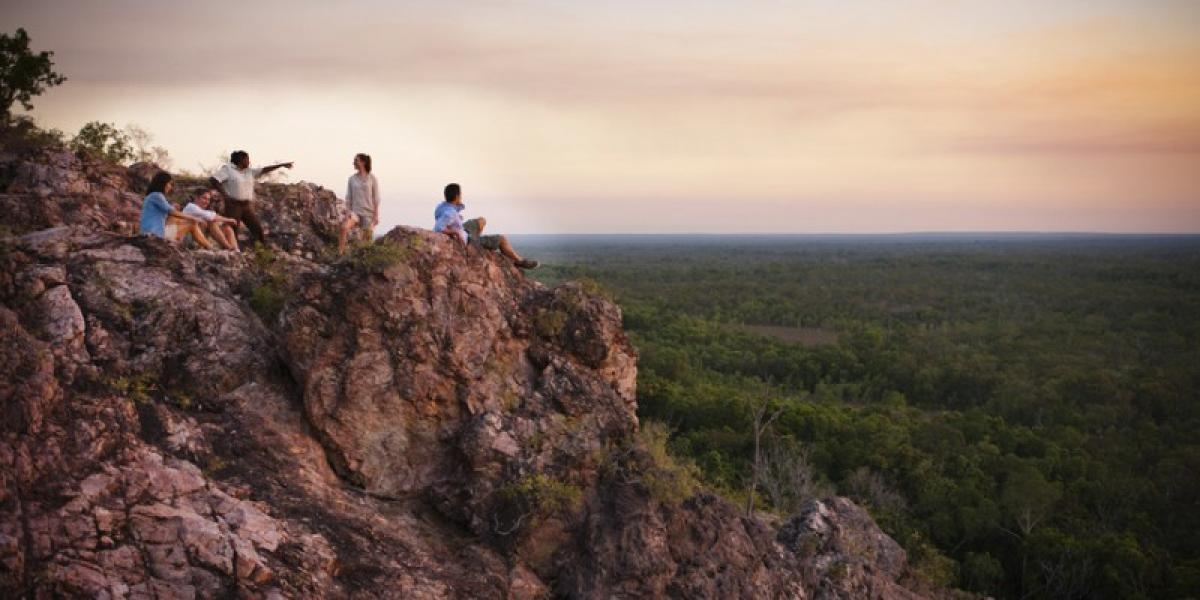 Australians come to the Northern Territory to understand their own country, beyond the myth of sand and sea and urbanity. It’s the symbolic and actual heart of the place, and while it may not be the ideal spot for family holidays with younger children, for older kids it’s a true adventure that they’ll never forget.

How many places on Earth remain like this huge central and northern-central section of Australia, where you and your family can be in the presence of rocks vibrating with 300 million years of history, where you can all walk on the red soil of a vast camel-studded desert, guided through a timeless landscape by a living representative of the oldest continuing culture on Earth?

Things to do with kids in Northern Territory

Start family holidays in the Northern Territory with a camel ride in the desert. Before railways and roads, the Red Centre was travelled by camels, which were imported to Australia in the 19th century and now count more than 200,000 wild specimens. If you base yourself in Alice Springs as a launching pad for Uluru, Kings Canyon and Kata Tjuta, your hotel or the visitor centre will recommend an operator. Or if you choose to stay near the rock, the Voyages Ayers Rock Resort (see Accommodation tab) runs 45-minute sunrise and sunset tours by camel for ages six and up.

Uluru, Kings Canyon and Kata Tjuta are often put together in 2- or 3-day package tours because of their relative proximity and great natural beauty. Uluru is beyond words – it doesn’t matter if you’ve seen 100 postcards of it or if you’re surrounded by other gobstruck and camera-happy humans, being here is utterly different and utterly moving. If your children have sturdy legs and constitutions, walk the base and feel mundane reality slip away with every hypnotic step. This is sacred land and if you stay quiet enough you can feel something deep and true and as old as the beginning of time (even if you’re only to be broken out of the spell with a “Mum! Dad! I’m hungry/need the toilet!”).

The rock formation of Kings Canyon with its dramatic vertical walls and gullies exploding with vegetation is in the Watarrka National Park, a rich and ancient ecosystem with fossils etched in seabeds dating back millions of years. It’s home to the alluringly named Garden of Eden – a lush waterhole at the base of the 300-million-year-old rock formation, where those with older kids might like to take a refreshing swim. There are lots of walks with varying degrees of length and difficulty, one of them culminating at the waterhole.

Kata Tjuta, otherwise known as The Olgas, are 36 rock domes that take the cake for old things to see and marvel at. More than 500 million years old, they emerge from the land like the elusive gifts of mysterious and magical forces.

Discover Darwin – closer to Asia than Sydney, and host to Mindil Beach Night Markets (every Thursday and Sunday night in the Dry season) filled with the joyous aromas of Thai spices and the rich colours of Papua New Guinean textiles. For a kid-centred day catch the number 9 bus from Casuarina or Palmerston to the free-entry playground and waterpark with its skate and bike ramps, outdoor pools and water slides and BBQ facilities.

Use Darwin as a base to explore the Katherine Gorge in Nitmiluk National Park, a place brimming with Aboriginal culture, ancient rocks, wildlife and unique flora. Your options here include a 2hr cruise through the gorge and overnight treks that include camping beneath a billion stars.

Darwin is also a handy base for venturing into Kakadu National Park, home to a third of Australia’s bird species and UNESCO World Heritage listed for both its natural and cultural values. The traditional owners of the land are the Mirrar, and its significance is heightened by the fact that both Aboriginal and white Australians fought for its preservation and safety against the hands of uranium-mining leaseholders who proposed production in nearby Jabiluka. Show your kids this natural wonderland before places like it disappear forever…

Emu sausages, kangaroo steaks, and crocodile kebabs – washed down, at least for parents, by (yet another) cold one: it may sound obscene, but these are the indigenous animals of Australia and their meats are usually wild or free range so very ethically sound. Otherwise, chicken parmigiana (breadcrumbed chicken with mozzarella and parmesan, served with pasta) is an Aussie pub fave that's a good stand-by on family holidays.

When to go to Northern Territory

The Northern Territory is so large that it has two distinct climate zones. The Top End or Tropical North (Aussies have a multitude of nicknames for almost everything) includes Darwin, Katherine, Kakadu and Arnhem Land. Darwin stays at 32°C all year so it's no wonder they love their beer so much up there.

In the Top End, the seasons are reduced to two: The Wet (Nov–Apr) and The Dry (May–Sept). The Wet is considered by many the most beautiful time to visit, as the rains coax nature into displaying her wildflowers and greenness. Watching the drama of the storms unfold in the close embrace of humidity, knowing that as soon as the rain stops all will be refreshed and it will still be warm, is both unnerving and reassuring. And after the sticky heat of the day you are rewarded with the sky whipping out her magic cloak of pink and orange, and – knowing Aussies – with the offer of a cold one in your hand.

However, the rains can also create havoc to your plans – a factor to be taken into consideration when planning family holidays. The waters of the Katherine Gorge, for example, become too dangerous for canoeing, and most walks in the national parks are inaccessible. Many trekking and nature enthusiasts therefore recommend visiting the Top End just at the beginning or just at the end of the dry season (Apr/May or Oct).

Central Australia or the Red Centre (told you about the nickname thing) comprises the regions of Alice Springs, Tennant Creek, and Uluru (formerly known as Ayers Rock). In spring (Sept–Nov) and autumn (Mar–May) it’s warm during the daytime and cool at night here. The hot hot hot summer lasts from December to February, with temperatures often in the mid to high 30°Cs. From June to August, nights are very cold (as low as 3°C). With small children in particular, the heat of summer can really restrict your plans – a walk around the base of Uluru would be too intense. Hats and sunblock are essential, and carry lots of water – it’s recommended that everyone consumes a whole litre every hour.

Flights will be your major expense when it comes to family holidays in the Northern Territory. Return economy flights to Sydney can be picked up from just under £800pp; onward flights from Sydney to Darwin start at around £180. Hire of a 4-berth campervan averages about £100 a day.

Accommodation prices vary widely – five-star options or campsites can tip your budget in either direction. One night in a four-star, two-bedroom self-catering apartment at the Voyages Ayers Rock Resort (see Accommodation) starts at about £230, although multi-night packages give better value for money.

Flying time22hrs All flight times are based on flights from UK London airports, to the capital or nearest destination airport.