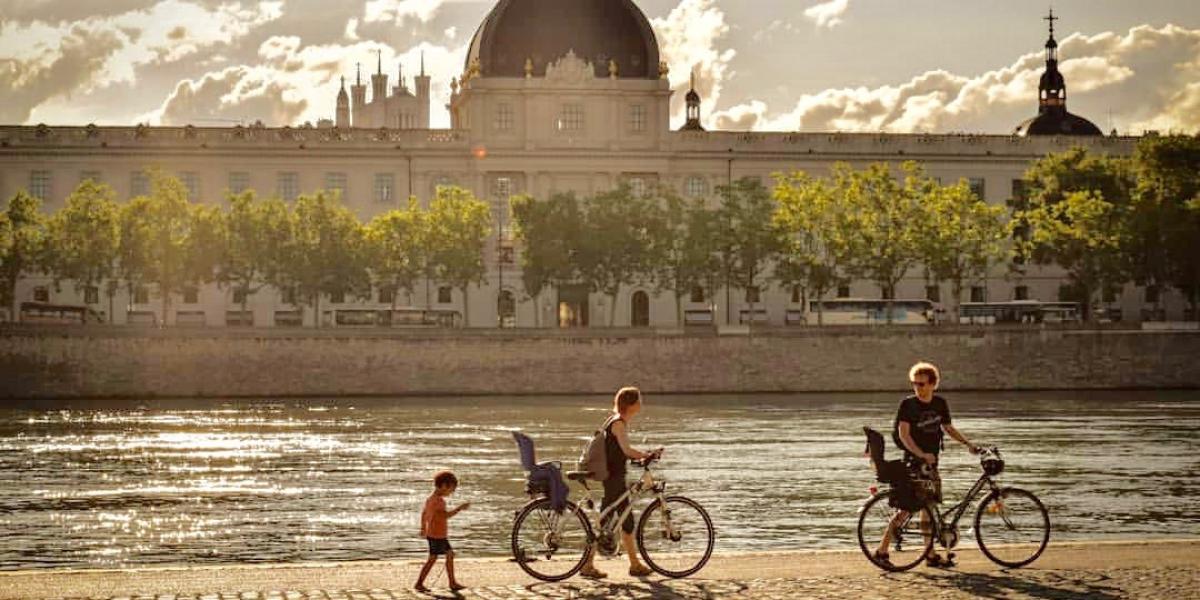 Part of the French Alps (Rhône-Alpes), the département of Rhône may not get much snow these days but is great for a blast of fresh air and is a sure-fire hit with outdoorsy types looking for low-key family holidays or breaks.

Named after the mighty French and Swiss river, Rhône is the producer of one of the world’s most famous wines, Beaujolais, and every November barrels of Beaujolais Nouveau are opened to great fanfare on the vast Place Bellecour in Lyon, the departmental capital and third-largest city in France. It’s the latter that’s the real draw to the area – it’s regarded as the country’s gastronomic capital as well as being a UNESCO World Heritage Site for its history and architecture, including fascinating medieval streets linked by tiny passages and ancient trompe-l’oeil walls kids enjoy spotting.

Things to do with kids in Lyon and Rhône

Explore Lyon, capital of the Rhône-Alpes. The Lumière brothers hailed from this city, and it’s here that you’ll find the fascinating Musée Miniature et Cinéma Lyon, where older kids will enjoy seeing both painstakingly crafted miniature interiors and life-size film sets. There’s more cinema history at the Musée Lumière, including rotating screenings of the brothers’ vast number of films, each lasting about 50 seconds. The Musée Gadagne is also worth a look for its puppets from around the world, in addition to its displays on the city’s history. Some of the puppets are more than a little creepy – something that could also be said of the animated mechanical figures acting out little tableaux at the Musée des Automates. Still, kids love ‘em. Lastly, the shiny modern Musée des Confluences has fascinating natural history and anthropology displays. It's located in the former docks area, alongside La Sucrerie – a gallery and music venue in an old sugar factory.

Take a trip back in time at Salva Terra, a medieval adventure and leisure park about 50km from Lyon, with reconstructions of daily life in the Middle Ages, games and activities, re-enactments of battles (some of which you can even join in), storytelling, music and so on.

Venture deep into the forest west of Lyon, to the Parc de Courzieu, where you can watch falconry displays, observe wolves (adults and babies) close up and follow a ‘wolf trail’ with interactive games, including a maze and a giant wolf’s head to play inside.

Get on your bike. Cyclists are particularly well catered for in Rhône, with three traffic-free Voies Vertes – flat ‘Green Routes’ also open to walkers, Rollerbladers, buggy-pushers and wheelchair-users. They include the 7km Chemin des Mûriers lined by mulberry trees producing local silk, and a part of the véloroute leading from Lake Geneva to the Mediterranean. Most Voies Vertes have bike-hire outlets nearby.

Swim in the scenic, fir-surrounded Lac des Sapins 65km north-west of Lyons. Other watersports are available, as are mountain-biking, volleyball and more, and you can camp or stay in chalets perfect for outdoorsy family holidays.

Lyon has long been regarded as France’s gastronomic capital and attracts some of the country’s foremost chefs, as well as producing great wines – Côtes du Rhône in addition to Beaujolais, nouveau and otherwise. The most famous Lyon chef is Paul Bocuse, whose brasseries include children's menus with traditional dishes. The usual chains are present here too.

Bocuse has also given his name to the city's main market, the covered Halles de Lyon Paul Bocuse – great for a browse, especially if you have chosen self-catering accommodation for your stay.

By the Lac des Sapins.

When to go to Lyon and Rhône

Summer is the ideal time to make the best of Rhône's outdoor activities, with the advantage that the area rarely gets crowded out by tourists. But if you come in winter to enjoy some of the world’s best skiing in the rest of the French Alps, you should make time for a day-trip to Lyon at the very least: in December, Place Bellecour is home to an illuminated big wheel, the Fête des Lumières  brings candlelit windows and light shows projected onto the side of the cathedral and other medieval monuments, and there’s a lively Christmas market.

You can spend a lot of money in Lyon and Rhône should you choose to splurge, especially on food in the gourmet capital. But opt for self-catering accommodation and there's no reason the region shouldn't be accessible to those on all budgets.

Flying time2.5hrs All flight times are based on flights from UK London airports, to the capital or nearest destination airport.

Carbon footprint0.75 CO2 Estimated tonnes of CO2 produced for return flights for a family of four.

Explore a wide range of places to stay in Lyon and Rhone and save up to 50% with Booking.com
Find out more

Fiona and friends introduce their kids to the life-enhancing pleasures of French markets.
Find out more
Best places to stay