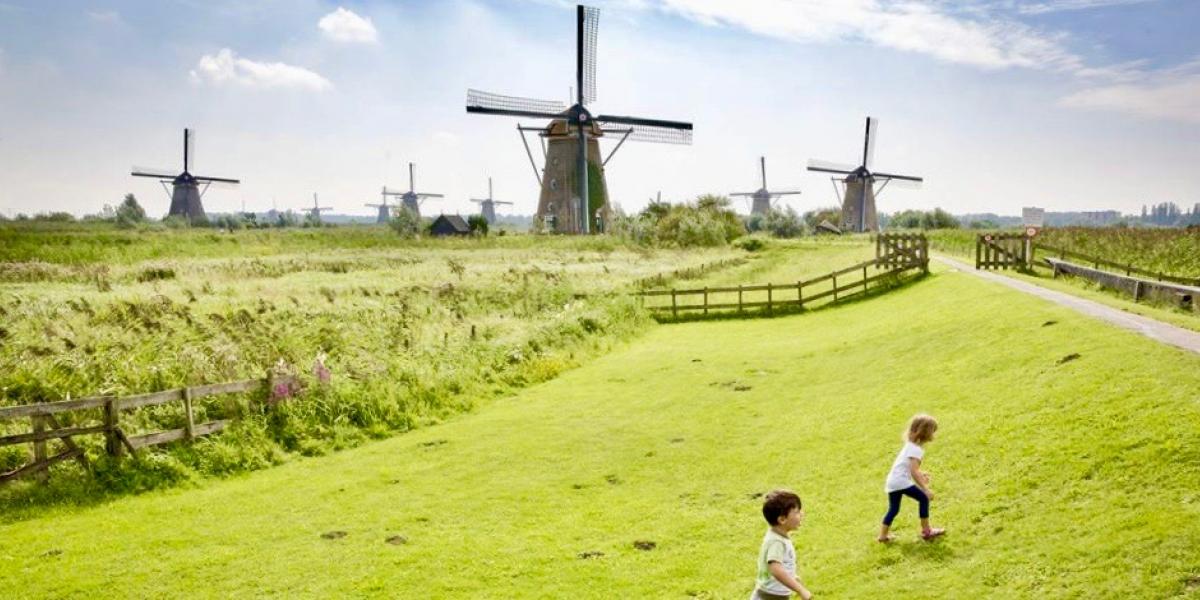 Places to visit in the Netherlands 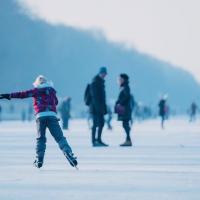 There's much more to the diminutive Netherlands than its infamous capital Amsterdam – though the latter can be surprisingly family-friendly if you approach it in the right frame of mind, even with younger kids. The Dutch landscape, though highly industrialised in parts, is unique – much of it lies at sea level or even beneath, having been reclaimed from the water, so dunes, unspoilt beaches, canals and other waterways, and flat fields stretching into the distance, punctuated only by the occasional windmill, predominate. These make the Netherlands a great destination for outdoorsy family holidays and breaks, especially if you enjoy cycling – indeed, you'll feel out of place if you don't hop aboard a bike while you're here. That counts for the towns and cities too, where babies, toddlers and older kids hurtle around in various contraptions affixed to their parents' bikes, or on family tandems.

The Netherlands' cities and towns are also characterful, with interesting histories and architecture for those who care to seek them out, while the people are generally extremely friendly and with few exceptions speak excellent English.

Things to do with kids in the Netherlands

Discover the Amsterdam behind the sleaze and the weed.

Take your aspiring knights and damsels to the medieval castle of Muiderslot, just 16km southeast of Amsterdam, or seek out one of the beaches within easy reach of the capital – Zandvoort is very hectic in summer, but there are some more family-friendly stretches north of IJmuiden.

Amsterdam is also a handy base for exploring the 'picture-postcard' Netherlands – the pancake-flat Waterland and Zaan region of North Holland (Noord Holland) with its windmills, wooden houses, battered fishing boats, dykes and tulips. Don't laugh, but some people even wear clogs here! You can get here from boat-trip from Amsterdam, with the focal point being the Zaanse Schans open-air conservation centre and museum, where you can admire working windmills and traditional Dutch buildings and watch artisans making everything from cheese or mustard to… uh, clogs. The venue has a great traditional pancake house, De Kraai, plus a bakery-museum selling sweet local bread and home-made sweets. If you have a bike, go for a spin along along the River Zaan, where you can see dozens of functioning windmills, some more than 300 years old, and other remnants of the area's industrial past.

Alternatively, head to the gorgeous National Park of Hoge Veluwe an hour southeast of Amsterdam, where you can help yourself to free white bicycles to explore the forests, trails, lakes and dunes, spotting wild boar, deer and moufflon as you cruise. Within the park you'll also find the Kröller-Müller Museum, with the world’s second-largest collection of Van Goghs (for those who didn't get their fill in Amsterdam, home to the largest collection), and biggest sculpture garden in all Europe.

Venture into South Holland (Zuid Holland), where the village of Kinderdjik has earnt UNESCO World Heritage status for its large number of windmills (19), tour-able by boat or bike. Just 15km east of Kinderdjik lies Rotterdam, a major ferry port as well as the Netherland's second-largest city. Rotterdam's biggest attractions for kids are its world-renowned zoo, Diergaarde Blijdorp, and the Plaswijckpark with its go-karting ‘traffic garden’, boat trips, mini-train, adventure playground and animal park.

Southeast of Rotterdam, in Kaatsheuvel, check out De Efteling, one of the world's oldest themeparks, with a nostalgic fairytale theme plus its own hotel and a new holiday village.

Just north of Rotterdam, investigate Den Haag (The Hague), the Netherlands' seat of government as well as home to Queen Beatrix. Its main attraction for kids is the miniature city Madurodam, where they can feel like giants amidst scaled-down Dutch buildings, landmarks and canals, but there are also some beach resorts on the city outskirts – Scheveningen and the smaller, more low-key Kijkduin.

Stop off between Rotterdam and Den Haag, to explore historic, pretty Delft, famed for its delicate blue and white porcelain (there's a factory you can tour) and filled with gabled buildings, impressive churches and meandering waterways. TheVermeercentrum focuses on the town's most famous son.

Don't miss Leiden, north of Delft – the birthplace of Rembrandt, it has three superb national museums, the most kid-friendly being the Natural History Museum, plus a quirky windmill museum, De Valk. In spring the town makes a good base for visiting the celebrated Keukenhof tulip gardens.

Make sure not to overlook the east of the country, for its historic cities and vast forests, and in particular, don't underestimate the appeal of Maastricht in its little pocket looping down between Belgium and Germany. Cosmopolitan by virtue of its location and its historical roles, it's an ancient town of cobbled streets, medieval bridges, quaint churches and an appealing café life, with lots of tempting outlets catering to a large and vibrant student population, especially around the tree-lined Onze-Lieve-Vrouwe Plein. Sights here include the Bonnefanten Museum with both Old Masters and contemporary artworks, and the Natuurhistorischmuseum with local fossils and remains, including those of mosasaurs and giant turtles.

About 30km north of Maastricht, Kasteelpark Born has a delightful kids' zoo and farm, bee colony, playground and café within the ruins of the old town castle. You might also think about nipping across the border into Germany to visit the film themepark Movie World (40 minutes from Maastricht).

Lastly, if you're feeling adventurous, consider making an excursion into the sparsely populated north. Sneek is a watersports centre from which you can take family boating holidays, while the West Frisian Islands offer relaxed, uncrowded beaches. The best way of exploring is to island-hop by ferry, stopping to explore Texel, Vlieland, Ameland and Schiermonnikoog by bike, on foot or on horseback, to watch seals being fed at the Ecomare seal sanctuary on Texel, take a boat trip to spot the grey seal colonies resting on Richel, or even go seal-spotting by hitching a ride aboard a shrimp-fishing boat, eating shrimps cooked aboard and listening to the fishermen’s tales. Swim, frolic on the dunes, and hunt for items from shipwrecks that have washed ashore. On Texel, let the kids set out in search of the stone gnomes dotted along the path through the woods, then take them to Oudeschild harbour to play on the pirate ship with its lookout tower, ropes and nets.

Dutch cuisine is generally quite bland and filling: think meat, fish and potatoes in hearty stews, plus the even more famous cheeses, which can be sampled as part of a Bittergarnituur sharing plate also containing sausage, bitterballen (deep-fried breaded meatballs), breaded chicken and mini spring rolls, or at one of the summer cheese markets in the pretty little town of Edam in the Waterland and Zaan region (see above). Buy Gouda cheese at the market in the city itself, picturesquely laid out as ‘Golden Wheels’. Local soused herring and mussels are also worth seeking out.

In cosmopolitan larger cities, international food is widely available, often at prices to suit students and young backpackers, although quality inevitably varies. For something more exotic, the country’s colonial history has endowed the urban centres with lots of good, inexpensive Indonesian restaurants. And wherever you are, you're never far from an inexpensive pankoekenhuis selling the sweet and savoury pancakes for which the country is well known – a must-try on all family holidays in the Netherlands.

In the north, cranberries grown on Terschelling are a popular ingredient in dishes/products offered by local restaurants and bakeries, although Texel is the best West Frisian island when it comes to eating, with lots of welcoming, family-friendly restaurants and beach cafés serving dishes that often feature the renowned local lamb or fish, oysters and shrimps, and asparagus.

Dutch beer (including wheat beers) is justifiably famous, and the gin-like jenever is also worth a try. The coffee is generally excellent, while kids go a bundle for a Chocomel chocolate-milk, served hot or cold.

When to go to the Netherlands

Though Dutch cities offer family fun year-round, May to September is generally the most pleasant time to visit the Netherlands, especially for family holidays or breaks, with the landscape and beaches coming into their own, plenty of scope for cycling through the countryside or the cities, and heaps of outdoor festivals and other events. That said, good off-season offers are available at holiday villages, whose indoor waterparks can be enjoyed whatever the weather.

Family-friendly events in the Netherlands include the Maastricht carnival in February.

Accommodation can be expensive in Dutch cities but the good choice of holiday villages in the Netherlands, some near cities, makes for good-value family holidays, especially if you take advantage of deals that include ferry travel.

Food can be very cheap in the Netherlands, especially in Amsterdam with its backpacker-friendly fast-food joints, but use your discretion when it comes to hygiene and quality.

Carbon footprint0.44 CO2 Estimated tonnes of CO2 produced for return flights for a family of four.

Our hand-picked recommendations for resorts and holiday villages where learning water sports is part of the fun.
Find out more

A Family Break in Amsterdam, Netherlands

Dea and family check out some of the city's lesser-known museums.
Find out more

A Day Out at the Van Gogh Museum, Amsterdam

Rhonda takes her kids to get arty in the Netherlands capital.
Find out more

Georgina rounds up some of her favourite cultural venues on the Continent with kids.
Find out more

An Amsterdam City Break with Kids