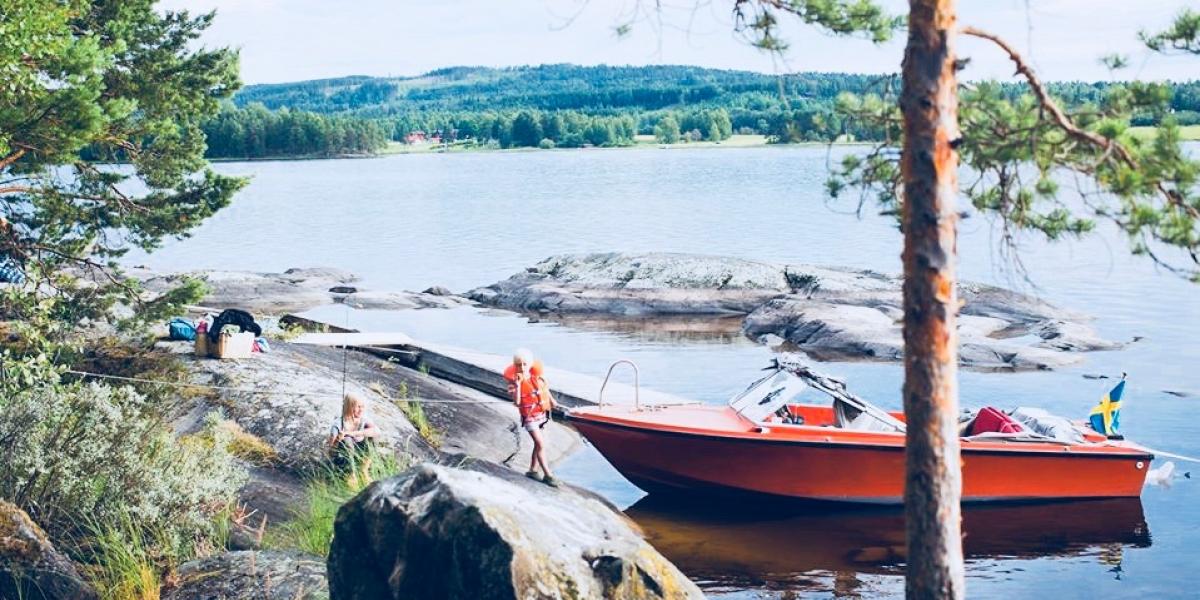 The largest of the Scandinavian countries, consisting mainly of forest punctuated by the odd crystal-clear lake or small town, Sweden has only 9 million inhabitants, so whether you head for the Arctic wilds of Swedish Lapland or the sunny Baltic beaches, you won’t feel crowded out as you explore its great outdoors and all it offers for family holidays – skiing, skating, canoeing, cycling, berry-picking and much more besides.

Sweden’s cities, most notably the capital Stockholm and the second and third cities Gothenburg and Malmö, can also be great places for family breaks, while kids fascinated by Sweden’s Viking heritage can find traces of it all around the country – in museums but also in the form of rune stones and burial mounds – as well as castles galore to explore.

Things to do with kids in Sweden

Visit the Swedish portion of the Sámi territory of Lapland, which is most accessible by organized family adventure break. Such adventures might include meeting Santa, visiting a reindeer farm, taking a husky safari, learning about the Sámi culture and way of life, snowmobiling, cross-country skiing and spending the night at the world-famous Ice Hotel®. You might also see the stunning Northern Lights from Swedish Lapland, particularly the mining town of Kiruna.

Ski. There’s only one real family option in Sweden, but it’s a doozie – Åre (pronounced U-ray) in the west, much praised by the likes of Condé Nast Traveller. A pretty little town of brightly painted wooden buildings around a frozen lake, it’s good for beginners and intermediates, with excellent nursery areas for kids (with free skiing up to age eight), reindeer- and dog-sleighs, skating and other Nordic pleasures. Packages are available through Neilson. See also our page on Skiing in Scandinavia.

Discover the lively, picturesque and pedestrian-friendly capital Stockholm, set on 14 islands connected by bridges on Sweden’s east coast, and boasting a charming Old Town (Gamla Stan) with medieval houses and cobbled streets, various beaches and green spaces that come into their own during the mild summers, and a brittle beauty in winter, when its windows are lit by millions of candles and snow sometimes blankets the ground.

The biggest family attraction in Stockholm is Skansen, an open-air museum featuring a full replica of a typical 19th-century Swedish town, where artisans in traditional costume demonstrate their crafts. Skansen also has an open-air zoo full of Scandinavian animals – wolves, wolverine, reindeer, moose, bison, brown bears and more – and an aquarium. Reached by funicular railway, it’s set on Djurgården island, along with the Gröna Lund amusement park with its thrill rides and family coasters, and Vasamuseet, a museum displaying the world’s only surviving 17th-century warship (family trails for ages 6+ are available in English). Perhaps best of all, the island is home to the eccentric Junibacken, a sort of indoor themepark based on national author Astrid Lindgren’s books for children, including Pippi Longstocking. You can play in Pippi’s House, ride the Story Train and meet characters such as Mercury the Cat and Old Man Festus, and there’s an on-site theatre, a children’s bookshop and a family-friendly restaurant.

Otherwise, don’t miss Stockholm’s Museum of Science and Technology with its hands-on Teknorama section for kids, or the Historiska Museet for its wonderful Viking exhibition. Those interested in the Vikings can also take a boat-trip to the Viking town of Birka in Ekerö, made up of several islands to the west of Stockholm. Like nearby Drottningholm Palace, home to the Swedish royal family (the grounds and parts of the palace are open to the public), Birka is a UNESCO World Heritage site.

South of Stockholm (30 minutes’ drive), Bornsjön Nature Reserve is a good place for seeing moose, roe deer and wild boar. It’s best visited as part of a Wild Animal Safari run by Stockholm Outback, who offer free pick-up and drop-off at hotels in the capital.

Also just south of Stockholm, the city of Södertälje has Sweden's biggest lock (where the Baltic Sea meets Lake Mälaren), and is also home to a big children’s science centre, Tom Tits Experiment, and to the Torekällberget outdoor museum, with an old village, a farm, animals and crafts shops.

Visit the university city of Gothenburg on the west coast for its scenic Haga district with its wooden houses and cafés, and for its famous ‘Fish Church’ fishmarket and seafood eateries, from humble shacks to Michelin-starred restaurants. It’s also home to an excellent Natural History Museum, to Scandinavia’s biggest amusement park, Liseberg, and to the science discovery centre Universeum, with seven floors over which visitors can discover Space, the rainforest and the oceans. Another highlight is the car-free Southern Gothenburg Archipelago just off the coast, which you can explore by ferry, stopping off to see Älvsborg Fortress and Vinga Lighthouse.

Venture to the southern tip of Sweden, where Malmö is another coastal city that makes for a chilled summer hangout – its Western Harbour, home to a long boardwalk and to the Ribersborg shallow artificial beach, has earnt Malmö the nicknames Riviera of the North and Swedish Riviera. Ribersborgs Kallbadhus is an open-air baths open year-round – in winter, folk take a hot sauna and then plunge into the icy waters (not recommended for kids).

Another family favourite in Malmö is Folkets Park with its large playground, kids’ theatre, terrarium, mini farm, pony rides and fleamarket. Kids also love the Toy Museum with its ‘Scary Room’, playroom, and displays on everything from Barbie to Harry Potter, and the Chokladfabriken, a chocolate factory with a small museum and a café specializing in choccie fondue and hot chocolate.

Stray beyond Malmö into the very pretty and ancient Skåne region of which it’s the capital – it has lovely beaches, quaint villages and more than 200 castles (some turned into hotels). In south-east Sweden meanwhile, in the province of Småland, sits the picture-perfect, myth-shrouded 13th-century castle of Kalmar Slott, in a dramatic setting overlooking the sea.

Do as the Swedes do and take family holidays or breaks on Gotland, the country’s largest island, located off its east coast in the Baltic Sea. Its medieval capital Visby is a UNESCO World Heritage site by virtue of its romantic ruined fortress, while its beaches get more sun than almost any other part of Sweden. It’s a great place to come in spring or autumn, when the temperatures are mild. Horse-riding, swimming in old quarries, diving, fishing and hiking on nature reserves are popular activities.

Sweden is most famous for its child-friendly meatballs, served with gravy, potatoes and lingonberry jam, and for its pickled (or even fermented) herring – more of an acquired taste and best washed down with a cold beer. Other treats you might encounter include reindeer, sometimes cooked with juniper berry, gravlax – thinly sliced salmon cured in dill, sugar and salt – and crayfish in September, when big crayfish parties (kräftskivor) are held.

The Swedes also love breads and have many different varieties, and are big on coffee and its social rituals. Vodka and beer, the most popular alcoholic drinks, are expensive; wine is a much cheaper choice of tipple.

Eating out can be expensive, although you can find cheap pizza places in the cities, and Max, the local alternative to McDonald’s, has better burgers and décor, plus free Wifi and coffee! In restaurants, look for budget-conscious set-lunches (Dagens ratt) including a drink, bread, salad, and coffee – it's more cost-effective to make lunch your main meal of the day.

And don’t forget IKEA! – the global homewares chain has popular good-value diners at all 15 of its stores in Sweden.

When to go to Sweden

If you're taking family holidays in Sweden based around winter activities, the snow in the north lasts roughly from November to April. Remember that in the depths of winter, daylight will be fleeting or even non-existent.

In summer (late May–early Sept sees the best weather), you may experience the converse of this Arctic Night – the Midnight Sun, when darkness never falls. Unfortunately, this means that the mosquitoes and gadflies can plague you 24 hours a day! – take plenty of repellent.

Sweden is a relatively expensive destination for family holidays and breaks, although Stockholm is cheaper than many other European capitals.

Flying time3hrs All flight times are based on flights from UK London airports, to the capital or nearest destination airport.

Carbon footprint1.32 CO2 Estimated tonnes of CO2 produced for return flights for a family of four.

Top 10 Places to Meet Santa Around the World

We take a tour around the globe in search of the best places to meet Father Christmas.
Find out more

Top 20 Chocolate Museums and Attractions Around the World

Rhonda tests out the tastiest sights for chocoholics round the world.
Find out more
Best places to stay