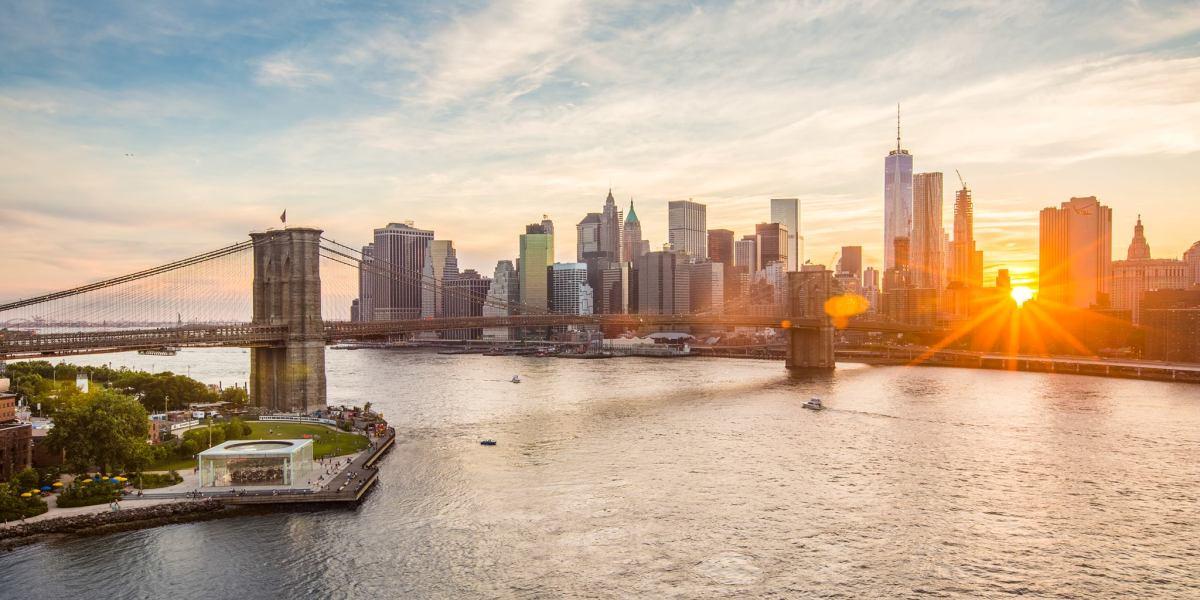 Irrepressible, buzzy and beautiful, New York is one very special place, and a wonderful destination for family holidays or breaks, especially with teens. The yellow taxi cabs, the Empire State Building, the Statue of Liberty, the Chrysler Building and the Guggenheim make this a city of icons as well as one of power and influence incommensurate with the size of its tiny spit of land. Then there's the fabulous shopping, the wonderful eating out and most of all the spirited people, unlike other Americans in many ways.

Things to do with kids in New York

Roam around Central Park, an enormous, much-loved green space in the heart of Manhattan, beautifully landscaped in the 19th century and a wonderful place to people-watch, learn to Rollerblade, bounce around in a playground or just run around shouting and leaping off rocks. It's pretty safe, and most of the best museums in Manhattan are grouped around its edges. The south side is probably the place to visit first, to ride on the famous old carousel, row on the boating lake or take a horse-drawn carriage ride. There's also a zoo, and in winter you can ice-skate in Central Park.

Take a harbour ferry to Ellis Island, on the way admiring the Statue of Liberty, which, donated in the 19th century by the French, offered the first glimpse of the New World for the millions of immigrants who were accepted or turned away in Ellis Island. Get a glimpse of this history at the Museum of Immigration.

Ascend the Empire State Building, built in just 410 days in the depths of the Depression. At night its top 30 floors are floodlit in seasonal and holiday colours. The views from the observatory on the 102nd floor are breathtaking, but be prepared for queues.

Make for the Intrepid Sea, Air and Space Museum to inspect the decks of the historic aircraft carrier, tour a submarine and a destroyer, experience an F-18 mission and show your kids Concorde.

Get creative at the Museum of Modern Art, which brings its exhibitions alive for kids through family gallery talks, workshops and family-friendly films, designed for ages 4–14. The Frank Lloyd Wright designed Guggenheim, also devoted to modern (Impressionist–contemporary) works, is best visited for one of its Sunday-afternoon drop-in creative sessions (ages 3–10), monthly family tours for ages 5–10, occasional family combined tours and workshops, or annual Family Day, but activity packs and guides and Guggenheim sketchbooks are always available.

Learn how to make a movie or animate a cartoon at the American Museum of the Moving Image, where interactive exhibits mingle with special effects props.

Discover the Children's Museum of Manhattan, where hands-on play teaches unsuspecting kids about science, maths, engineering and more, guided by familiar characters including Dora and Diego.

Explore Soho – South of Houston (pronounced ‘howston') Street – which into a tiny area packs an estimated 250 art galleries, 4 museums, nearly 200 restaurants, and 100 shops. The street scenes, buskers and performance artists bring it to life for little ones. The vibrant little ethnic enclaves of Chinatown and Little Italy are also worth a stroll – and a foodie stop-off.

Walk across Brooklyn Bridge, day or night, for spectacular views of Manhattan and to visit the cafés in Brooklyn Heights, and perhaps the Brooklyn Museum, another art behemoth.

Take a Circle Line Cruise (half-way round is more than adequate) for great views and commentary on New York buildings and history. A Big Onion Walking Tour can be fascinating with older kids who don't mind pounding the pavements, while award-winning Context Travel runs bespoke family and general tours of aspects of New York.

Hop aboard a free ferry to Governors Island, named for its use in British colonial times by New York's royal governors. Its historic fortifications are open to the public for in summer and early autumn and there are free National Park Service walking tours, bike loan, art installations, concerts, festivals and fairs.

Visit the parks on the West and East sides: Riverside and Carl Shultz Park offer good playgrounds, people-watching and river views. Don't miss the goings-on in the dog exercise areas!

Catch a show on Broadway; long-running favourites include The Lion King and Mary Poppins. With older kids, try a night at the Apollo Theatre in Harlem – Wednesday night is amateur night, where stars are born, with wild but fun crowds.

Go off-the-beaten track: visit Grand Central Station for its ceilings and atmosphere; The Cloisters in the northernmost end of Manhattan – a lovely museum of medieval art, with a great café and parkland; and St John the Divine in the Columbia University area, just off Central Park – a massive Episcopal cathedral unfinished after a century of building but full of surprises and surrounded by delicious eateries courtesy of the wealthy Columbia students.

Shop. New York has fabulous gadget shops (most notably the Apple Shop in Times Square) and some of the best toy-shops in the world, including FAO Schwarz and Toys R Us in Times Square.

Head for the beaches of Long Island. The celeb-and-wealth magnet Hamptons at the far-eastern end of the Long Island, in Suffolk County, won't be to everyone's taste, but Coney Island, the USA's biggest largest amusement area from 1880 to World War II, is a must. Despite a period of neglect and a still-uncertain future, it's got plenty of old-time, tacky charm in the form of rollercoasters, haunted houses and other funrides and an aquarium.

Keep up to date with events, attractions and exhibition in New York with the city's icon, Curious George.

Nothing quite hits the mark like a New York deli – at least one huge breakfast with waffles and blueberrry pancakes is a must on family holidays or breaks. Katz’s Deli on Houston St is renowned for its famous clientele (it's also where the infamous When Harry Met Sally scene was filmed). Other favourites include The Boathouse in Central Park, less for the food than the setting (you can hire kayaks and rowboats to take out on the lake, or take a gondola tour). Serendipity 3, a famous ice-cream parlour that also serves meals, offers massive, family-sized portions.

Almost all New York eateries are very child friendly. Take-aways are also an institution in New York – if you are staying at a serviced apartment, pick up deli food, a pizza or a Chinese.

When to go to New York

New York is a great destination for family holidays and city breaks year-round, but be prepared for very high summer and very low winter temperatures. That said, New York at Christmas, draped in lights and sometimes snow, and dotted by ice rinks, is an unmissable experience.

Flights tend to be cheaper in the first half of the year.

Kids on the High Line.

Do your homework, root out the best accommodation offers, base yourself outside Manhattan and travel out of season, and family holidays and breaks in New York shouldn’t break the bank.

Flights to New York can start from as little as £200pp but expect to pay substantially more in summer and autumn. Hotel and apartment prices also vary by season. You may find it less expensive to book a holiday rather than buying flights, rooms and transfers separately.

New York has restaurants, cafés and delis to suit all budgets, and large portions that mean you can share dishes.

Flying time7.5hrs All flight times are based on flights from UK London airports, to the capital or nearest destination airport.

Carbon footprint6.16 CO2 Estimated tonnes of CO2 produced for return flights for a family of four.

Rhonda and family combine living like locals with being tourists in one of the world’s most exciting cities.
Find out more

Inspiration for taking the kids away for the festive season, whether to visit Santa, hit the ski slopes or bask in the sunshine.
Find out more

11 Eco-friendly Places to Stay with Kids in North America

Georgina hand-picks family-friendly eco-friendly accommodation in the USA and Canada.
Find out more

Places where mums can grab some ‘me’ time and a little pampering while also enjoying a break with the kids.
Find out more

Top 10 Places to Meet Santa Around the World

We take a tour around the globe in search of the best places to meet Father Christmas.
Find out more

A Review of the Kimberly Hotel, New York City

Rhonda and family enjoy the spacious offerings of – and spectacular views from – a boutique suite hotel in Manhattan.
Find out more

A Guide to New York City on a Budget with Kids

Cathy shares 10 free/wallet-friendly things to see and do in Gotham.
Find out more

Dea discovers that the Big Apple is not just an adults' playground.
Find out more

8 Reasons to Take the Kids to New York this Christmas

Georgina shares her tips for making the most of the Big Apple in all its festive finery.
Find out more

Georgina looks at ways of making your family day out both cultural and fun.
Find out more

How to do the Big Apple on a budget.
Find out more

A Family Tea with Madeline at The Carlyle Hotel, New York City

Dea and family enjoy a heavenly high tea in the iconic Bemelmans Bar.
Find out more
Best places to stay