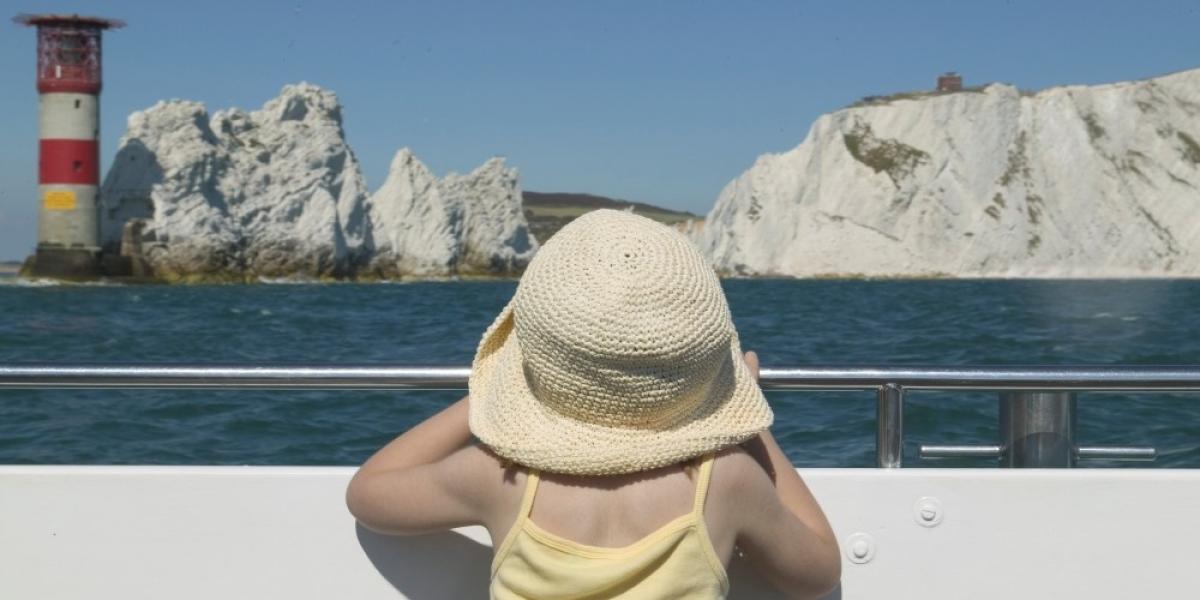 On the doorstep of the British mainland, a short hop across the Solent from Southampton, the Isle of Wight has always been a favourite destination for family holidays and breaks. These days it's a chic choice too, with music festivals, stylish hotels and hip foodie haunts helping bring its image up to date.

But don't let the cool vibe put you off! – time has stood still in many respects, with Victorian promenades and simple pleasures such as crabbing to be had, and amusement parks, museums, animal parks and farms galore.

Most importantly, the Isle of Wight is an island so there’s plenty of beaches to keep the kids happy, while the fact that half of it has been designated an Area of Outstanding Natural Beauty means that adventures inland will be rewarded with cutesy villages and outdoor fun such as riding, hiking and cycling on minor roads and lanes, grassy tracks and bridleways.

Things to do with kids in the Isle of Wight

Hit the beaches: many are award-winning and some are Blue Flag. Sandown Beach is popular, with a wide expanse of shallow water.

Go cycling on tranquil country lanes and picturesque off-road routes. There’s bike hire across the island, with some firms delivering to your accommodation. Among the best for families is the unique Red Squirrel Trail along the island’s former railway line, with picnic benches, installations to encourage birds and other wildlife, and, on one section, specially commissioned Troll sculptures.

Take a peek around Osborne House, Queen Victoria’s favourite holiday home, with Punch & Judy shows on the beach plus the unique Swiss Cottage – a chalet where the royal kids used to play, now an interactive museum with a garden adventure trail. Carisbrooke Castle is a good place to let off steam, with loads of space to run around, and Yarmouth Castle has a great gun platform to admire.

Go further back in time by taking a look at the Roman Villa at Newport or check out one of the museums, especially The Shipwreck Centre and Maritime Museum at Bembridge and Lilliput Antique Doll and Toy Museum at Brading.

Head for Dinosaur Expeditions, Conservation and Palaeoart Centre at Brightstone with its fossil displays, kids' activities and guided fossil hunts. Bones (of the dinosaur variety) regularly turn up in the cliff landslips here, and you can also head out independently with a bucket and spade. There's also the Dinosaur Isle interactive museum beside Sandown Beach, with a dinosaur gallery.

Make for Fort Victoria Country Park with its planetarium, model railway with tokens to get everything going, and marine aquarium with local and tropical sealife. The Isle of Wight Zoo at Sandown is great if you like big cats, or head for Butterfly World. To see rare red squirrels, make for Parkhurst Forest, with lovely walks and picnic sites along the trails. Wroxhall has both a Donkey Sanctuary and Owl and Falconry Centre.

Try out the themeparks, especially Blackgang Chine, a fantasy park aimed at under-sevens, in a great setting on a clifftop, above green areas linked by woodland walks with fairytale-themed areas. Robin Hill Countryside Adventure Park has a huge park plus adventure rides and summer events including open-air cinema. The Needles Park at Alum Bay has lots of different rides and other attractions, including coloured sand models, glass-blowing, a sweet factory and a hair-raising cliffside cable-car to the beach.

Explore Ventnor, one of the most delightful towns on the island, with bunting-strewn lanes concealing quaint little shops and great eateries. OceanBlue Quay on Ventnor seafront is an innovative sea-charter company running sea safaris and lobster- or mackerel-fishing trips aimed at the whole family. You can take your catch home for your BBQ or even ask the OceanBlue cafe, back on dry land, to cook it for you.

Most pubs and cafés on the Isle of Wight offer local crab and lobster in sandwiches and salads, or head for the two very good restaurants attached to hotels: the Seaview Hotel and The George in Yarmouth. Fish and chips on the seafront is also a must-do while you're here.

In fine weather the best places to eat with children (apart from picnics on the beach) are those right by the sea. The Spyglass pub at Ventnor has good local bitter, and parents can sit outside and keep an eye on older children playing on the beach below, while Baywatch on the Beach at St Helens has tables practically on the beach (booking is advised in the evenings in August).

Wheeler’s Crab Shed in Steephill Cove is among the island’s best-kept secrets, as the traditional bay can only be reached on foot. Nestling among the handful of cottages and beach huts, the tiny Crab Shed serves locally renowned, delicious crab pasties, as well as lobster salad and mackerel ciabatta. All the seafood is caught fresh each morning by the owner Mandy’s husband.

When it comes to ice cream, look out for a Minghella’s sign – the company was founded in the 1950s by film director Anthony Minghella’s parents, and its 140 flavours, still made on the island, use local cream.

From ice cream to garlic and cheese, the Isle of Wight is awash with local artisan producers. The Garlic Farm in Newchurch sells a huge array of garlic products, from chutneys to varieties of bulbs you can grow at home, and also has a fantastic Garlic Café serving inspiring garlic-based dishes.

When to go to the Isle of Wight

While the Isle of Wight's quiet, gentle atmosphere is one of its main draws, many attractions for children are closed from mid-autumn to Easter. Summer is the best time to come with kids, but there's no getting round the fact that the sights and beaches are more crowded.

The Isle Wight is a good-value destination for family holidays and breaks, partly because it's so easy to reach and also because of its good supply of self-catering accommodation.

Catch of the day!

Explore a wide range of places to stay on the Isle of Wight and save up to 50% with Booking.com

The ideal family lodges on the Isle of Wight

The best cottages on the Isle of Wight

Cottages.com offers the ideal cottage break for your family in the most beautiful parts of the Isle of Wight

Tracey and family find that they really do like to be beside the seaside.
Find out more

A Single-Parent Holiday on the Isle of Wight

Judy and Joe enjoy blissful days out on the family-friendly island.
Find out more
Best places to stay