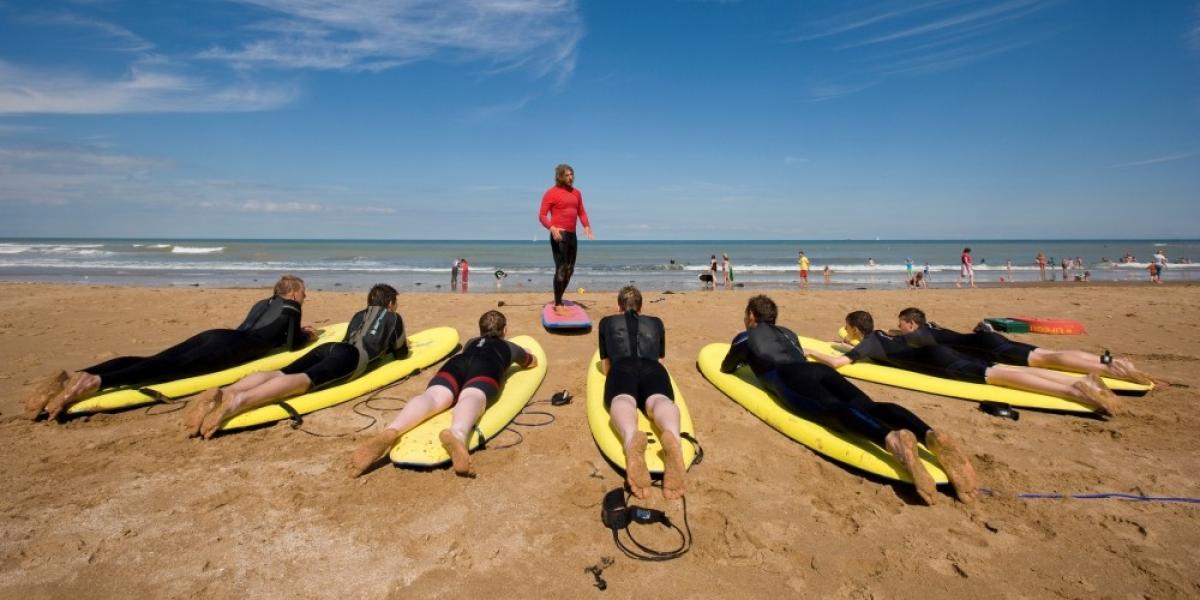 The ‘garden of England’ with its hop gardens and orchards is not just a place you pass through on your way to the ferry to France – Kent is also a wonderful staycation or short-break destination for families, with miles of sandy beaches perfect for paddling and many enchanted castles to discover, among lots of other child-friendly attractions.

Despite being within easy reach of London, Kent also remains low-key compared with more conventionally touristy destinations such as Cornwall, and hence is a top choice for family holidays on a budget.

Things to do with kids in Kent

Begin family holidays in Kent in the historic city of Canterbury, where you can scoot around Canterbury Cathedral, founded in 597AD, then listen to yarns at The Canterbury Tales, a visitor centre offering children’s commentaries to accompany Chaucer and his characters on their pilgrimage from London to the shrine of St Thomas Becket in the cathedral. If you have more time to spare, take an historic cruise along the River Stour, or venture 5km miles south of Canterbury, to Howletts Wild Animal Park, home to the UK’s largest African elephant herd, apes, tigers and snow leopards, plus a Treetop Challenge for ages 5 and up.

Head due north to the coast at Whitstable, where kids can learn to kite-surf on the flat water known as The Street, and the whole family can explore the town’s shops, galleries and delis. Herne Bay has its pretty, quiet beach, while Margate, Ramsgate and Broadstairs also offer great beaches  and old-fashioned British seaside fun. Ramsgate Harbour is perfect for seal spotting and speedboat trips. See our feature Ten Best Beach Holidays in the South East for more on Whitstable, Broadstairs and Herne Bay.

Move on to Faversham, where Farming World offers tractor rides, adventure playgrounds and soft play, as well as animals including pigs, horses, llamas and alpacas.

Venture southeast of Whitstable, where Wildwood Woodland and Wild Animal Park has more than 50 species of British wildlife, including owls, otters, wild boar and wolves, in 40 acres of woodland.

Near Sandwich, see gibbons, wallabies and a whole host of other animals, plus animatronic dinosaurs, at Wingham Wildlife Park.

Explore the fortifications at Deal Castle or head to Dover to see the famous white cliffs and Dover Castle with a new attraction telling the story of the Dunkirk evacuation.

Don’t leave the south coast without taking a ride on the Hythe and Dymchurch Miniature Railway, the world’s smallest steam railway, from picturesque Hythe out to bleak but atmospheric Dungeness. See our feature A Great Family Journey by Steam Train.

Head inland, to the area around Ashford, where Port Lympne Wild Animal Park offers a 90-minute safari ride to see giraffe, black rhino, wildebeest and zebra, and the Rare Breeds Centre between Hamstreet and Woodchurch offers more traditional pastimes, including trailer rides and seasonal pig racing. Little ones will also love the ride on Thomas the Tank Engine on the Kent and East Sussex Railway.

Carry on north of Maidstone, to Chatham with its trio of family-friendly attractions. You might check out the pirate play days and ghost walks at the Historic Dockyard Chatham, and in nearby Strood, play on the scaled-down JCBs at Diggerland.

Don’t leave Kent without taking the Spa Valley Steam Railway to Groombridge Place Gardens and the Enchanted Forest, where little ones can play on giant swings and get lost in a mystical forest of animals including deer and giant rabbits.

Kent has some of England’s best food festivals, farm shops and farmers' markets – great if you’re self-catering. The Canterbury Goods Shed is the only farmers' market in England open six days a week year-round. The larger towns have the usual family-friendly chains for those in need but country pubs usually welcome kids, often with their own menu.

Local foodie events worth looking out for during family holidays include the Beer and Hop Festival in Maidstone in mid-Sept and the famous Whitstable Oyster Festival in July.

Family on the beach

When to go to Kent

Kent is great to visit year-round, although its beaches and plentiful outdoor activities are best appreciated on family holidays in the summer months. Note that for the foreseeable future, Lapland UK is not in Kent but in Berkshire.

On the whole, Kent is a reasonably priced destination for family breaks or holidays – quick and easy to get to for most visitors and good value in terms of accommodation, especially if you choose a self-catering option.

Explore a wide range of places to stay in Kent and save up to 50% with Booking.com

The ideal family lodges in Kent

The best cottages in Kent

Cottages.com offers the ideal cottage break for your family in the most beautiful parts of Kent
Find out more

Rhonda Carrier looks at great walking and hiking spots in England, Scotland and Wales with kids of all ages, from tots in child-carriers to reluctant teens.
Find out more

We round up the best places around the UK to take your kids cycling or mountain-biking, whether for a day out for a short break.
Find out more

Our pick of the top places for a camping holiday with kids in Norfolk, Devon, Kent and elsewhere.
Find out more

Emma gives the rundown on some of the UK's most family-friendly seaside resorts.
Find out more

Top 5 Most Haunted English Heritage Sites Around the UK

We take the family in search of ghostly goings-on and Halloween events at some of Britain's top days out venues.
Find out more

Rhonda rounds up the best places around the country offering 'camping for softies'...
Find out more

Georgina roots out the best children's and family bushcraft and survival courses.
Find out more

A Day at the Races

Dea and her twins discover an unlikely new passion.
Find out more

A Family Day Out at Go Ape Bedgebury, Kent

Patrick Cook reviews one of the countrywide treetop adventure courses.
Find out more

Family Breaks: A Spring Weekend in the Weald of Kent

Family fun and a charming B&amp;B in Kent.
Find out more

Dea and family take a trip on the Hythe and Dymchurch Railway.
Find out more

Family Days Out and Breaks in Kent