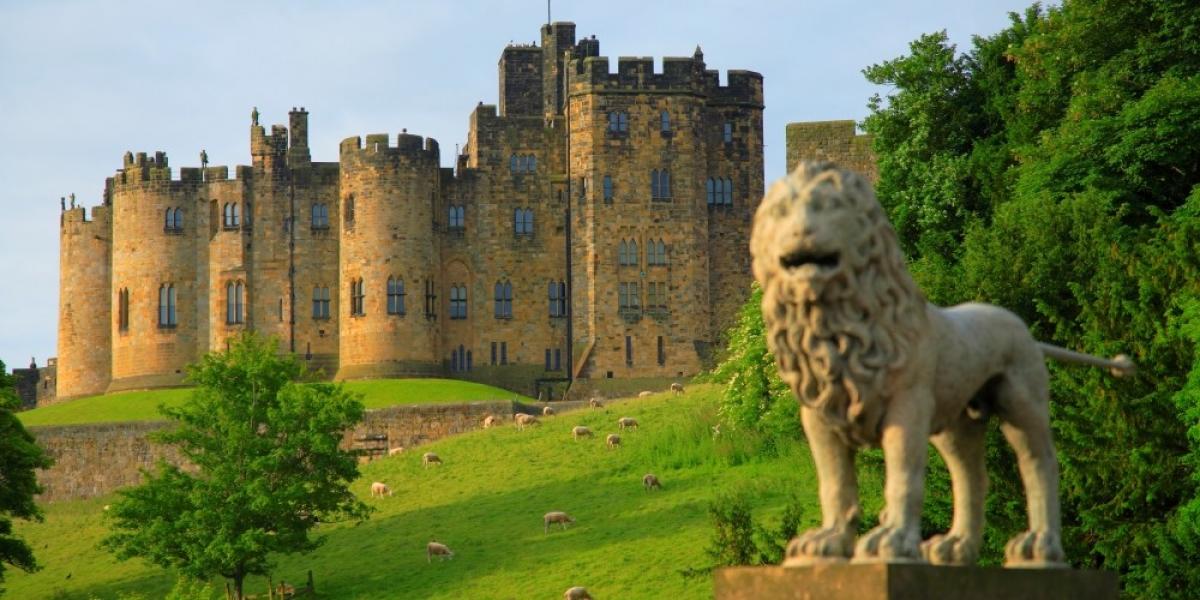 Northumberland offers historical attractions dating back to Roman times - including the vast engineering feat of Hadrian's Wall with its museums and forts – against a magnificent backdrop of rolling hills, wild moorland and a coastline teeming with miles of golden sand, plus lots of castles and other child-friendly attractions.

Things to do with kids in Northumberland

A charming picturesque market town in the heart of Northumberland. There’s plenty of shops and cafés in the centre, but the real jewel of the town is it’s the awesome castle dating back to AD600. Alnwick Castle is brilliant for kids to explore with it’s Knights School, Dragon Quest and archery lessons. The younger ones will love the fact that the first two Harry Potter movies were filmed at Alnwick Castle. Close by you will also find the beautiful Alnwick Garden, home to one of the world’s largest treehouses, a poison garden and fountains for the kids to splash around in.

Makes up over a quarter of the county and stretches from the Scottish border down to Hadrian’s Wall. The park boasts the cleanest air in England, along with the darkest skies and cleanest water meaning the whole family should feel re-energised after just a couple of hours. Most of the park is situated in the Cheviot Hills and offers fantastic walking, fishing, pony trekking and other outdoor pursuits. Just outside the park you will find the mind-boggling Craside estate, the first house in the world to be powered by hydro-electricity. The grounds are perfect for exploring while the house is full of hidden treasures.

Let the kids loose on Kielder Water, the largest man made lake in Northern Europe. Kayaking, wind-surfing and sailing can be arranged on the day. The surrounding forest is home to over 75% of England’s remaining red squirrel population so if you can’t spot one here, then you’re not looking hard enough! Other elusive wildlife to look out for are otters, roe deer and feral goats, while the Leaplish Bird of Prey Centre allows youngsters to handle and discover the kings of the sky. This is great for those families who love to explore the great outdoors!

Built from AD122 onwards to defend against the lawless Picts,  The world heritage site of Hadrian's Wall can still be seen in magnificent detail. With most children now learning about the Romans in school, this is a great place to bring history to life. The human story of the wall is best seen at Vindolanda, whilst rude carvings can be found at various locations along the wall, guaranteed to amuse the little ones, and the not so little ones. The most dramatic part of the wall can be found near Once Brewed Tourist Information Centre, and fans of Robin Hood: Prince of Thieves will be able to follow in the footsteps of Kevin Costner and Morgan Freeman at Sycamore Gap. Near Hexham, gateway to Hadrian's Wall, is a Go Ape treetop adventure course at Matfen Hall.

Every bathing beach along the Northumberland Coast has been recommended in the Good Beach Guide and the beach at Bamburgh was voted the best in the UK by the Daily Telegraph, with the flat, calm sea perfect for youngsters who want to paddle around and explore the many rock pools. Designated an Area of Outstanding Natural Beauty, the sweeping golden sand beaches of the Northumberland Coast are punctuated by mighty castles and wildlife filled islands. Take a tour of some of the great Norman castles such as Warkworth, Bamburgh or Dunstanburgh which straddle the coast before climbing aboard a boat to the Farne islands to see huge numbers of sea birds and England’s largest grey seal colony. Whether it’s bird watching, seal viewing, boat fishing or fantastic beach walks and picnics, the Northumberland coast will have you and your kids bursting for more.

The trip across to Holy Island is an adventure in itself as the road is cut off twice a day by high tide. Known as the “Cradle of Christianity” in the UK, the island was home to monks as far back as 635AD before they were forced to flee by Viking raiders. Everyone who visits Holy Island feels there is a deeply serene, peaceful atmosphere to the place with the centuries old priory and unusual castle evidence of the past glories of the island. Please take note of the tide times when visiting the island as many visitors in the past have chosen to ignore the warnings and have found themselves having to be winched to safety by the RAF rescue helicopter as their car is swallowed by the North Sea!

Strategically placed between England and Scotland the town has changed hands 31 times over a turbulent history, with many residents still confused about whether they are English or Scottish. The huge town walls were built during the reign of Elizabeth I, with the overall cost higher than the amount spent during the Spanish Armada! In previous times it was a huge port exporting wool, grain and salmon, although in recent years it has diversified offering a border town full of charm, history and expansive architecture.
A short distance from Berwick lie the quaint villages of Ford and Etal, which are linked by a mini railway ideal for those with youngsters who love Thomas the Tank Engine! With a castle, an old fashioned mill and many fantastic houses and halls to explore you should find enough here to entertain the whole family.

Is your gateway to the north and well worth a visit. This vibrant city is built on a history of work and toil and proudly flaunts it. It’s magnificent  Georgian architecture and industrial might, highlighted by the awe inspiring Tyne Bridge are a joy to the eye. In recent years the city has transformed itself in particular on the quay side with the building of Norman Fosters Sage Centre and the opening up of the Baltic Mill art gallery. Always popular with the families are The Centre for Life, where science is brought to life with interactive displays and thrilling rides, and Seven Stories, a fun filled journey through children’s books. There’s a fantastic metro system linking the city and the shopping, entertainment, food and everything else that makes Newcastle great will keep the family smiling.

Northumberland prides itself on its local produce and if you are self catering then the local farmers markets and shops offer extremely tasty, great value local produce.

Should you fancy a meal out, the county has many outstanding inns and pubs cooking locally produced, wholesome food Northumberland’s association with the sea and its fishing heritage is well represented. The tiny fishing village of Craster has been smoking kippers in the traditional way for decades and it is rumoured these were the favourite breakfast dish of the late Queen Mother. Check fourth generation Craster kipper smokers L.Robson & Sons Ltd. If kippers aren’t for you then take a stroll around Seahouses and go to Pinnacles to eat “probably” the best haddock, chips and mushy peas on this planet. For meat lovers, Cheviot Lamb is arguably as tasty as it’s Welsh and New Zealand counterparts, though the residents of Northumberland like to keep this a secret!

If you prefer a more modern, stylised menu then the many restaurants of Newcastle offer many culinary delights on a par with many top European cities.

When to go to Northumberland

During the summer when the sun is shining and your striding down the sands, the whole family will find something to entertain them. While The North Sea can be cool, the gentle, flat seas are extremely safe for kids who will love the rock pools and the paddling. The winters can at times be a bit cold, but Northumberland enjoys less rainfall than Cornwall and the Lake District meaning that if you wrap up warm you can still enjoy the refreshing feeling of the great outdoors. Anyway, there’s no such thing as bad weather, just the wrong clothing! If, however, you have forgotten your water-proof jackets and wellies, there are plenty of child friendly attractions to keep the family entertained should you find yourself in the area on a rainy day. As with all destinations you should book early in the summer but in off season months you can normally find a family friendly hotel or cottage on your travels with a welcoming fire.

You can expect to pay between £300 and £700 per week to stay in a cottage, depending on time of year, size and proximity to the coast. You'll need to budget on top for meals, transport and excursions. Other accommodation options vary tremendously in price to suit absolutely every budget.

Explore a wide range of places to stay in Northumberland and save up to 50% with Booking.com

The ideal family lodges in Northumberland

The best cottages in Northumberland

Cottages.com offers the ideal cottage break for your family in the most beautiful parts of Northumberland
Find out more

We check out the family-friendly delights of the Kielder Lake region.
Find out more

A Christmas Family Break in Northumberland

Rhonda and family spend the festive season by the British seaside.
Find out more
Best places to stay