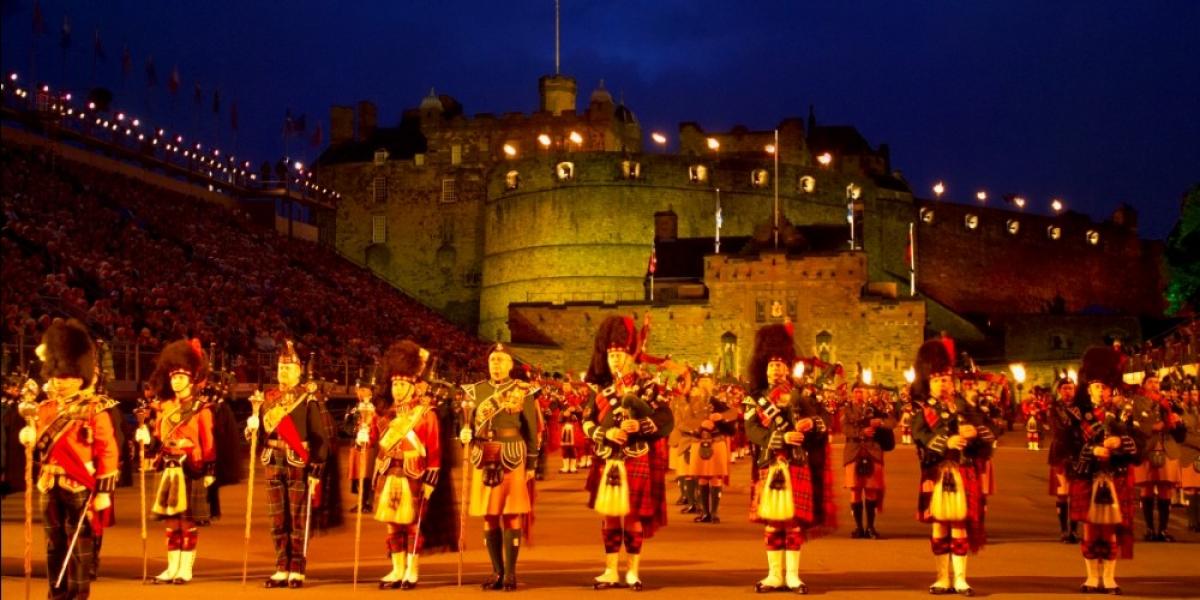 The Scottish capital is jam-packed with things for kids to see and do, including one of Britain's greatest castles, so it's a great place for fun and educational family holidays or breaks taking in lots of history and culture – especially when the world-famous Festival is in full swing.

Edinburgh also has a gentler pace than many comparable cities (outside the Festival period, that is), and you can walk around its historic centre with relative ease. There’s a huge choice of family-friendly eateries and accommodation options, plus great shopping in its department stores, from long-standing traditionalist Jenners to funky modern Harvey Nichols.

Things to do with kids in Edinburgh

Don’t miss the Castle, which dominates the city skyline and is home to both the Scottish Crown Jewels (the Honours) and the famous One O'Clock Gun, as well as offering stunning views. Every evening in August, the Castle is the floodlit backdrop for the Military Tattoo, a mix of pageantry and parade with its fair share of bagpipes and weeping Americans and Australians tracing their families back to the old country – for sheer soldier per square foot, it can’t be beat. The Castle is also the permanent home to the National War Museum.

Stroll down the Royal Mile to the Palace of Holyroodhouse at the other end from the Castle – it’s the Queen’s official residence in Scotland but is more famous for having been home to Mary Queen of Scots during her turbulent reign (it was the setting for the murder of her secretary Rizzio by her jealous husband). An interactive family tour enlivens the visit for kids, and there are family workshops and activities for ages 5–11 at weekends and in school holidays (younger visitors get access to toys, games and other resources in the Palace Family Room or Coach House).

Explore the former royal hunting estate of Holyrood Park, now a free-access swathe of hills, lochs, glens, ridges, cliffs and natural springs. Arthur’s Seat rising up at its centre is a popular and fairly easy walk, rewarding you with splendid city and countryside views.

Get cultural at the Edinburgh International Festival, when classical music, theatre, opera and dance artists from every corner of the globe descend on the city. Running simultaneously (more or less – as part of ‘the Festival’) are the Edinburgh Festival Fringe, where ‘anything goes’, from musical theatre and cutting-edge comedy to children’s shows and free street performances on the Royal Mile, and the Edinburgh International Book Festival, which also includes lots of events for children.

Get spooky, beginning at The Real Mary King’s Close Experience, a warren of ancient ‘closes’ that lay hidden beneath the Royal Mile for centuries, including the home of a gravedigger’s family where you can learn about the plague. Open to ages 5 and up, it’s said to be one of Scotland’s most haunted sites, and special Supernatural History tours up the creepy ante for those that way inclined. Ghoulishly minded kids 5 and up may also enjoy some of the outings run by Mercat Tours, which include Ghosts and Ghouls, and Ghostly Underground. The Edinburgh Dungeons is as schlocky as its counterparts elsewhere.

For something a little more wholesome, visit the Camera Obscura & World of Illusions on Castlehill, where, within a Victorian rooftop chamber, through the use of a mirror, lenses and daylight, you can see a live moving panorama of Edinburgh projected onto a viewing table. Kids love pretending to pick people up on their hands and squash them, or make the traffic climb over paper bridges, while adults enjoy listening to the guide tell stories of Edinburgh past and present. The same venue holds the Magic Gallery where you can, for instance, make your hands glow as if they’re being X-rayed and paddle in a virtual fish tank, a Light Fantastic exhibition of holograms, Edinburgh Vision, featuring old, new, live and unique pictures of the city, Fun, Games & Stairway, where you can learn how artists use optical illusions in their work, and lastly, panoramic city views aided by telescopes and viewing panels.

Get up-close and personal with the inhabitants of Edinburgh Zoo, best known for its penguins, who enjoy the luxury of the world’s biggest penguin pool, but also home to tigers, lions, gorillas and more. Other nature-based attractions are Our Dynamic Earth, where all the family can learn about the planet in an interactive, fun way, and Deep Sea World, Scotland’s national aquarium (a 20-minute drive outside the city at North Queensferry).

Discover Edinburgh’s fascinating museums, including the National Museum of Flight (30km outside the city), with hands-on galleries where you can find out how aircraft fly, and how to fly them. The National Museum of Scotland traces the history of the local land, people and culture, with Discovery Zones allowing younger visitors to play as a Roman soldier and a Viking trader, connect with Dolly the sheep, design a robot, test-drive a Formula 1 car, and blast off into Outer Space. Then there’s the Museum of Childhood, described as ‘the noisiest museum in the world’, and opposite it the Brass Rubbing Centre, with a collection of replica brasses allowing you to make rubbings of everything from medieval knights to Celtic designs

Experience the Scottish Storytelling Centre, a  unique modern building on the Royal Mile, celebrating the art of storytelling through a child-friendly exhibition called Scotland’s Stories, temporary displays, and events including family activities and live storytelling (see also ‘Eat’, below).

Tour the Royal Yacht Britannia 3km outside the centre in the port of Leith, where kids enjoy seeing the Queen’s old bedroom and an on-board garage still housing one of her Rolls Royces. There’s a special audio-guide for kids.

Extend family holidays by venturing 40km east of the city, to the seaside town of North Berwick on the Firth of Forth in East Lothian. Sights close to it include the ruined medieval fortress Tantallon Castle, dramatically sited on a promontory, and Bass Rock, an island that appears white due to much of its surface being covered by gannets (and their guano!). Although Bass Rock can’t be visited, the Scottish Seabird Centre on-shore screens live-action footage from the island, some by cameras that visitors can operate themselves by remote control. There’s also a discovery centre, a play area, a program of events and workshops for kids, and boat-trips around the island, which is in fact the world’s biggest single-island gannet colony.

Edinburgh is a cosmopolitan city so you’ll find a wide-range of restaurants and cafés offering child-friendly international favourites, particularly in the centre. A good daytime option is the Storytelling Café at the Scottish Storytelling Centre, open for lunches, coffees and snacks, wine and beer, and offering a kids’ menu.

An Edinburgh oddity and must-try on family holidays is fish and chips served with ‘chippie sauce’ – a runny brown sauce with vinegar that locals swear by. For something a bit more refined, the family-friendly hotel Malmaison out at the port of Leith is big on ‘Homegrown & Local’ food, from North Sea hake to Buccleuch Estate rib-eye steak, and kids under 12 (‘Mal Monkeys’) eat for free.

Another great hotel for eating with kids is the Balmoral (see Accommodation), where the stylish Hadrian’s restaurant has a Family Weekend Menu featuring the likes of ‘Five a Day’ seasonal Scottish vegetable soup, fresh Scottish salmon fingers with baby new potatoes and garden salad, and Blairgowrie strawberries with vanilla ice cream. There are toys, books, colouring items, board games, an X Box and portable DVD players to hand so parents can linger over coffee while the kids enjoy themselves. The kitchen will also make up a ‘Posh Picnic’ for guests, and the concierge recommend great picnic spots, from Arthur’s Seat (see above) to stately homes or beaches on the outskirts of the city.

When to go to Edinburgh

Edinburgh is a great destination for family holidays or breaks at any time of year, but avoid August and early September unless you've specifically come for the Festival – it’s packed and expensive.

To see the city in its full glory, come for Christmas and particularly Hogmanay (New Year's Eve), when Edinburgh celebrates in great style, with a ‘Winter Wonderland’ with fairground rides and a big wheel, ice-skating, German markets and a Highland Fair, and New Year frolics galore (watch the fireworks from the calmer surrounds of Calton Hill if you have kids, and don’t miss the dog-sled races in Holyrood Park).

View of Edinburgh from Braid Hills

Like any capital, Edinburgh can be an expensive city for family holidays or breaks once you’ve factored in accommodation, eating out and entrance fees to its many attractions, but it’s nowhere near as expensive as its southern rival London, with budget-busting cottages and apartments sleeping 4 available for less than £400 a week.

Explore a wide range of places to stay in Edinburgh and save up to 50% with Booking.com

Rhonda looks at the best festive outings – and top family-friendly accommodation – around the country for 2016.
Find out more

The biggest, brightest Guy Fawkes Night events around the country in 2016 – and some great places to stay nearby.
Find out more

Dea and family revisit a much-loved city.
Find out more

Rhonda rounds up the top literary sites and events with kids.
Find out more

A Review of the Children's Spooky Underground Tour, Edinburgh

The 7 Spookiest Sights in Edinburgh with Kids

We find out why the Scottish capital is one of the best places to bring ghoulish-minded kids.
Find out more

Georgina looks at ways of making your family day out both cultural and fun.
Find out more
Best places to stay