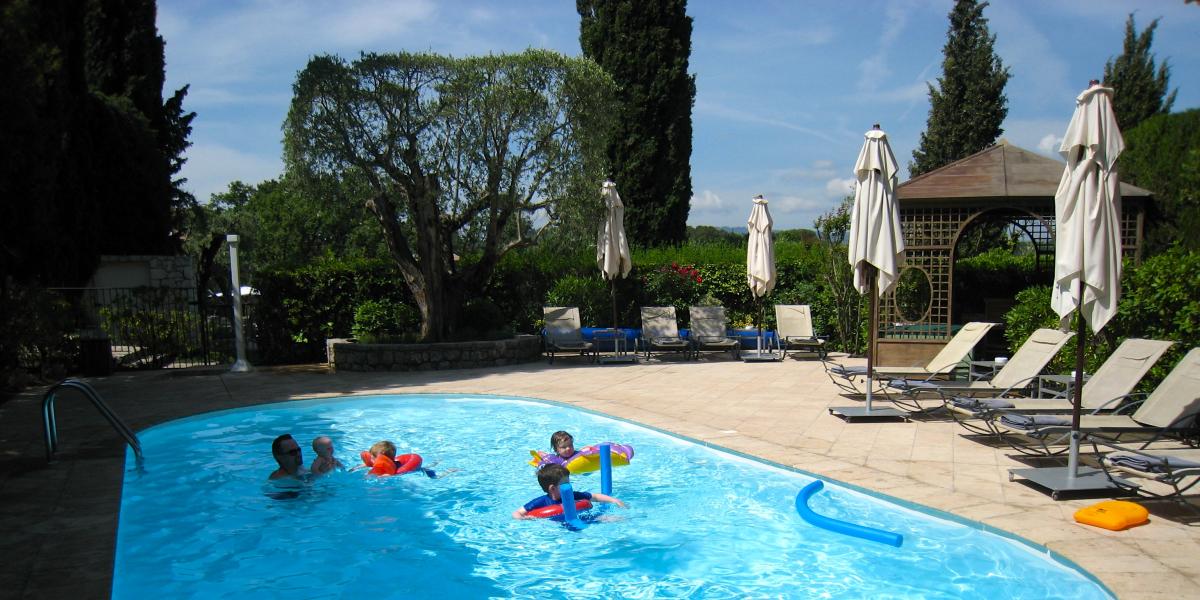 We were, when we arrived at the in the hills behind Nice, wrecks. Several dicey moments on hairpin bends in the motorhome in which we were touring the South of France with our three sons, one of them a four-month-old baby, had left us more than a little frazzled. A dose of five-star luxury was the only thing that could ease the pain.

As my husband ran off for some emergency therapy in the Shiseido Spa, I checked out the 18th-century farmhouse with the boys. First off were our interconnecting rooms, which both opened out onto their own shady terraces where you could take room-service breakfasts and meals if you weren’t eating in the Michelin-starred restaurant or at the poolside restaurant, or simply sit and chill. The boys, desperate to flake out after a long day, were brought a DVD from the movie menu by one of the charming staff.

"It was my turn to slope off for some pampering in the spa, where Japanese hot towels are used, while my husband returned to the family pool with the boys and a little friend they'd made at a neighbouring table. Emerging an hour later, I felt ready to face anything. And a good job too – it was time to check out of the hotel and back into our trusty, battered motorhome."

I changed the baby and laid him out on a towel in front of the window in our room, and he gurgled in delight as the incredible Mediterranean sunlight, the inspiration for Matisse, Picasso and countless other great artists, streamed in over his bare limbs. I meanwhile, melted at the sight of the astonishing landscape that unfolded before us – a picturebook Provençal valley, with the perfume town of Grasse arrayed over its hilltop in the distance. It was almost too perfect for words. All the stress washed out of me as I contemplated its beauty while Zac wriggled and giggled beside me.

After a while, we headed out to explore the grounds. I hadn’t expected the Mas Candille to be family-friendly – I was visiting it foremost as research for a book I was writing about romantic destinations in France. So I was surprised when I discovered that it has three swimming pools. The best, an infinity pool with views over the same valley, is reserved for adults, and there’s also a hydrotherapy pool for clients of the spa. But the third one, at which families are welcome, is gorgeous too.

The gardens themselves are not completely ideal for smaller children, since they fall away steeply down the hillside and have quite precarious little walking paths threading between the exotic plant-life, as well as potential death-traps such as an open-air Jacuzzi and, in the spa gardens, a plunge pool. However, provided you supervise your kids, you can take advantage of quiet little corners set up with younger guests in mind, with swings and games, including pétanque.

We didn’t think the Michelin-starred restaurant could cope with our feisty children, or that they’d enjoy it much. And in any case, we were bushed. So we ordered room service and sat out on one of our terraces. The prices made our eyes water a little, but everything on the Menu Enfant, including a rice and tuna salad, and fillet of hake with mash, was impeccably cooked and utterly delicious. Better pay for quality, we thought, and have them eat it, than be left with mountains of uneaten junk. You can also, by prior arrangement, have picnics brought to you in certain secluded parts of the grounds.

We slept soundly, rising for a wonderful breakfast by the pool, from a buffet brimming with fresh Provençal fruit, breads and other produce. By now it was Mum’s turn to slope off for some pampering in the spa, where Japanese hot towels are used, while Dad returned to the family pool with the boys and a little friend they had made at a neighbouring table. Emerging an hour later, I felt ready to face anything. And a good job too – it was time to check out of the hotel and back into our trusty, battered motorhome.

As we left, we promised ourselves we’d come back one day, for a longer stay. The Mas Candille is one of those rare places, we decided, that successfully combines romance and the atmosphere of a relaxing retreat with a child-friendly attitude. And that is no mean feat.

Read more about family holidays and breaks at the Mas Candille.