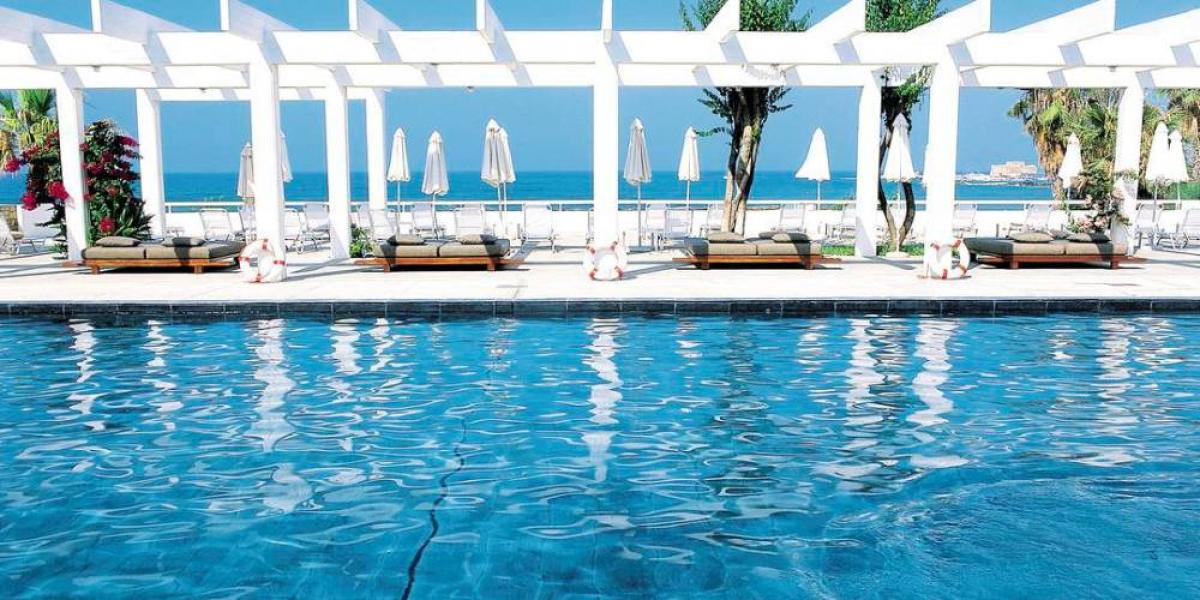 A Break with Baby at the Almyra Hotel, Cyprus

As a travel writer I’ve learnt to deal with unexpected problems, but nothing can prepare you for the arrival of your first-born child. I’ve never experienced stress like it – more than a couple of minutes of Joseph (now nine months old) crying and I come close to losing the plot. The raw panic it conjures in me still amazes me. So how on earth were we going to cope with going on holiday with a baby?

My wife wanted to go somewhere sunny before she returned to work after maternity leave, but it was late March and we agreed the longest flight time we could consider being cooped up with Joseph with members of the public was three or four hours. (Feed, sleep, gurgle, grumble, nappy change, hopefully sleep again). That meant it was the Canaries or Cyprus. We plonked for Cyprus because the weather is better at that time of year and, given its close historic connections with the UK, more people there speak English.

But where to stay? Given my day job, I know lots of operators and hotels that claim to be ‘family friendly’, but as I researched I discovered that this phrase often means little more than “we have a kids’ club”. And there are remarkably few places that seem to properly cater for babies.

So I was very surprised to read about the Almyra. From the outside, this Paphos establishment looks like a sleek designer hotel: all white spaces, funky furniture and slate tiles. And yet, oddly, it also caters to noisy, messy, smelly babies.

First off is its Baby Go Lightly service. I was flabbergasted the first time we got the car ready to go away in the UK after Joseph arrived. Travel cot, buggy, highchair… the list of clobber was seemingly endless, and was all the more incredible to someone used to chucking a few things in a bag a few hours before leaving for the airport.

With this trip, we could pre-order, at no extra cost, a cot, baby-walker, highchair, changing mat, sterilizer, baby gym and kettle, so our room when we arrived was a kids’ paradise. The contrast with the white marble floors and dark-wood furniture was a tad odd, but we were certainly happy. Then there was the crèche, which meant we could spent the afternoon lolling by the pool (there’s an adults-only pool and spa) while Joseph was swooned over by attentive trained supervisors in a room full of toys, with soft-play area.

There was even room service for babies – for a couple of Euros we could order up freshly cooked and puréed meals for Joseph, with chefs taking into account his severe allergy to milk. It was delivered on a tray with the usual room-service flourish to our door bang on 6.15pm for when we had ordered it, leaving us wondering why we’d bothered to bring a week’s worth of baby meals with us.

But the best thing of all was the staff, who were genuinely friendly and helpful the whole time. They’d pick Joseph up and give him a cuddle while one of us was going to the buffet and the other was sorting out his food, and they’d come over and say ‘Hello’ to him. They clearly liked children. Even when he chucked stuff on the floor or cried, they were only too happy to help.

We stayed early season so the hotel was only a third full and there was plenty of space for everyone. I do wonder if when it’s packed in summer it might be less relaxed – if there were lots of babies all crying en masse during dinner, it could be pretty awful. And you could argue that the sleek designer style of the place is inappropriate – there are rather a lot of hard surfaces and sharp angles that could be a worry for parents with toddlers. On the other hand, lolling on a lounger by the slate-tiled pool surrounded by gleaming white walls, looking out to an azure sea in the early-summer sunshine with Joseph snoozing next to me, really felt like… well… a real holiday.

Read more about family holidays at the Almyra.