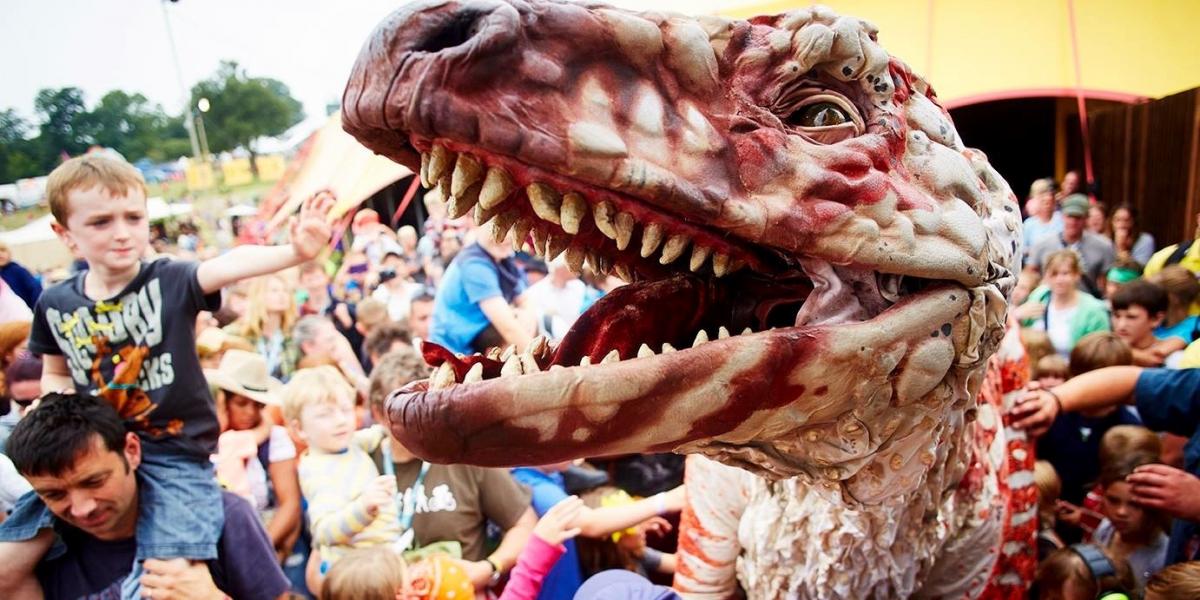 My mum thought my husband and I were mad to take our nearly three-year-old daughter and six-month-old son to Camp Bestival, particularly as the week leading up to it saw a lot of torrential rain and thunderstorms. But then she doesn’t see the point of camping… or of music festivals. Why would you make your life more difficult than it already is? she asked, and sitting here, whacked out from our weekend, sunburnt, and bruised from carrying heavy bags and pushing a cheap buggy over rough terrain, I’m asking myself the same question. But if we will insist on making our lives more difficult, we may also experience a soul-nourishing sense of achievement from having got through it all – and isn’t that what being a parent is all about?

The weather turned out to be perfect for camping – a lot of sun with a cool breeze from the sea, which, at this site, at Lulworth Castle in Dorset, can be seen glittering in the distance from the Kid’s Garden. Camp Bestival sells itself as the baby sister to Bestival, on the Isle of Wight, and though smaller (only 15,000 tickets are sold), it’s got a similar ethos and sense of humour, with quirky entertainments and a dressing-up theme. But this particular festival is aimed largely towards families — this year the fancy dress was animals, judged by CBeebies Mr Tumble! So there’s a lot more dodging of buggies than of inebriated casualties to be done (just watch out for the inebriated buggy-pushers, though…).

Dora dressed as a ‘Futterbly’ with a tutu and wings, and red fuzzy antennae that bobbed along as she ran screaming in and out of tents and swung around tent-poles. We resigned ourselves to flexi bed-time – having been to Womad with her last year, we knew excitement and the long light evenings would prevent sleep from coming easily. After a delicious (if pricey) tortilla with salad for dinner on the first night, we found ourselves dancing to Disco Bloodbath in the Bollywood tent, where hardcore party beats were pumped out to a crowd of parents swinging their hips and their children. Dora loved it, as did Arlo, strapped onto my back, his little heartbeat ticking to the music as he was lulled into sleep by my monster moves. But then I got paranoid about the pounding noise damaging their unformed little ears and made a swift exit.

After five hours’ sleep (with late nights come early mornings at festivals, alas), Saturday saw us head for the Kid’s Garden, buzzing with children, buggies and a lot of queues – a concept that three-year-olds don’t really understand. Tears were shed over the bouncy castle and why there were so many people between Dora and it, and why she and her daddy had to stand looking at it, intermittently shuffling their feet towards it, for no apparent reason. There were also donkey rides, a junior catwalk, English National Ballet workshops, a kids’ disco, a toddler area, storytelling and workshops at the Penguin Children’s Book tent (which catered for all ages, with everything from Peppa Pig to Doctor Who) and delicious food at Hugh Fearnley-Whittingstall’s River Cottage Café.

After a few too many tears, we decided to have a walk, willing Dora to sleep as we headed for the shade promised by the woodland walk. This turned out to a tactical error – a fantastic playground invoked more tears when we wouldn’t let her out of the buggy. We hurried away, but this proved to be another mistake, as we found ourselves in a fabulous rare breeds farm with baby alpaca, potbellied pigs and pygmy goats. More tears. We found a pond and a bit of rough terrain, and my husband Nick rigorously pushed the buggy around and around until sleep took hold. We promptly headed for the bar, got ourselves some local pear cider and sat down with friends in the sun at the Castle Stage, to listen to Alela Diane.

After a day of walking the site, and a couple too many ciders, I decided to stay at the tent in the evening, after Arlo was asleep, while Nick took Dora to Bon Iver, which they loved. Dora came home almost sleepwalking, and Nick went out again and had a laugh at the Cuban Brothers and made a fool of himself in the Silent Arena, where Rob da Bank, DJ and co-founder of the festival, competed with another DJ as the audience listened on their headphones, switching between them on different channels and dancing out of sync.

Nick got back at about 2am, falling into bed in a sigh of beery breath. Music goes on till late (about 3am), and it’s loud – our kids slept through it, but I couldn’t. But you don’t go to a music festival to sleep, however depressing that might feel at two in the morning when you’re woken for the fifth time by a whoop or someone tripping over your guide rope. And to be fair, most of the camping at Bestival is designated for families, with just a small space for non-families, and most night noise comes from hyper kids or crying babies. After a weekend here, surrounded by kids at every turn, it did amaze me that people should choose to come without them.

Boutique camping or hiring a tipi, yurt or podpad can make the whole experience more civilized, but it will cost you, and once you’ve bought a festival ticket and eaten the expensive festival food, it makes for a rather pricey weekend. We didn’t get the most out of our ticket, either, arriving late on Friday and leaving at lunchtime on Sunday (I was exhausted!). But friends with kids the same age as ours really got into the festival spirit, taking their sleeping babes down to the main site every night, and parking their buggies beside them as they boogied to PJ Harvey or Greg’s Great 78s, while their kids snored contentedly. However much I’d like to think otherwise, I just wasn’t that chilled.

Would I go again? Definitely, though I would have enjoyed myself more if our children had been older – more of the activities would have been relevant, and I wouldn’t have felt so tied to my still-breastfed son. What would I do if I came again? I would bring some wheels, as the traipse from the car-park to the campsite nearly finished off my husband before we’d even begun; and I’d buy a programme before they were all sold out (quite early on Saturday – bad planning on the organisers’ part!). Oh, and I’d spend more time sitting on the beaten-up sofas place strategically placed around the site, reading the newspaper and eating the superb ice cream from local dairy farm Purbeck.

Read more about this year's Camp Bestival in our round-up of the best family festivals around the UK.