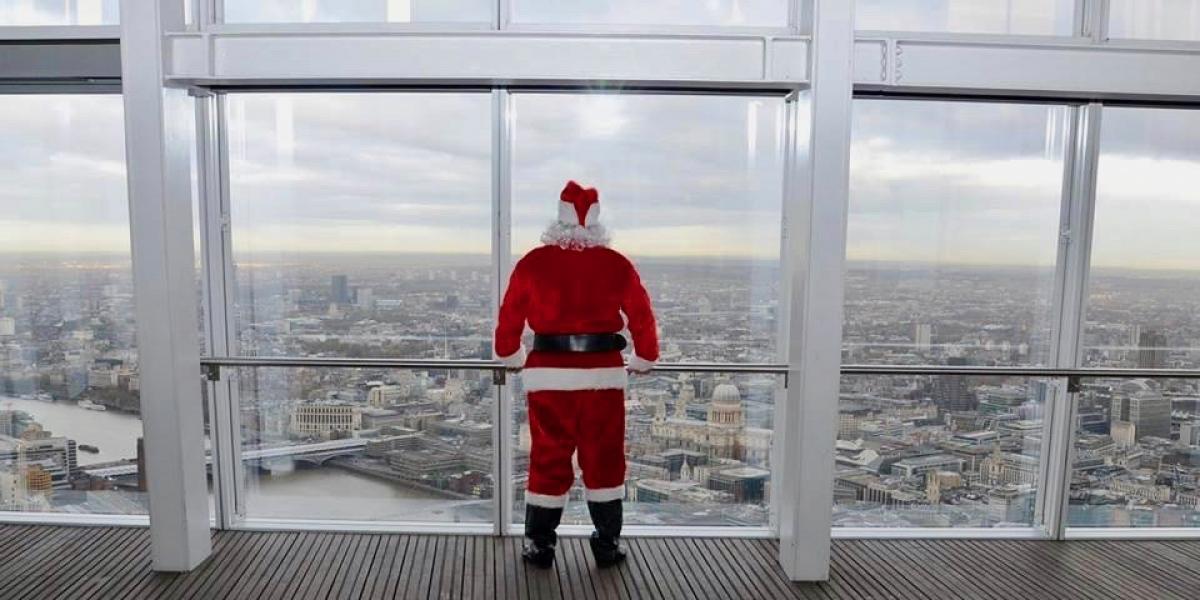 A Day Out in London at the Shard and HMS Belfast

When we got into London it was really festive and Christmassy. The view from the Shard was totally different from the view at ground level. The Shard was looking amazing with lights, and it was beautiful with the clear glass, through which you could see for miles on end. The trains down below looked like a toy set and, as for the people, you could hardly see them. We were lucky because it was great weather to look down. There were lights everywhere we looked. Even the toilets were pretty amazing because each cubicle came with a floor-to-ceiling view of London. We could see several different stadiums including the Emirates (Arsenal), Craven Cottage (Fulham), the Olympic stadium and Wembley.

The Shard is the tallest building in Western Europe, at 310m to tip. While building the Shard, workers found a fox nicknamed Romeo on the 72nd floor. They thought he survived on food left by workers and they then released him into the wild. You may be wondering how many glass panels cover the Shard. It's 11,000 – enough to cover eight football pitches! And if you laid out the wires you could end up in Paris…

From the Shard it's less than a 10-minute walk to the HMS Belfast. By the time we got there, our minds were exploding with questions as the three massive guns loomed over us in the festive city. My dad has been before but he still found it extraordinary.

"The vibrations of the guns ended up cracking the crew’s toilets.
This brilliant boat used to have a plane on board but no runway,
so it took off with the help of a catapult."

At first we went onto the bridge, which was amazing and full of telephones and radio contact equipment, next to a secret operating room where they intercepted messages from the enemy. Another part of the boat I found amazing was the sick bay, where they could perform major operations. But the best bit was the engine and boiler rooms, which are full to the brim with valves and pipes and wheels and thermometers and much more.

Just above that was where they store the shells, all lined up in rows. There was a punishment cell too, which was a dark pitch-black room where you only got bread and water. You could be sent here for being drunk, falling asleep while on look-out or bad, silly behaviour. The sailors slept basically anywhere they could find, for example in hammocks attached to the ceiling. There were 900 sailors on board and very few got a bunk.

There was a church as well, which is amazing given it’s on a boat. And there was one good thing for the sailors, which was a little tuck shop in the corner with all sorts of chocolate and drinks and more.

In case you did not know, the HMS Belfast was a battleship in the Second World War. The vibrations of the guns ended up cracking the crew’s toilets. This brilliant boat used to have a plane on board but no runway, so it took off with the help of a catapult. They had to keep cats on board because there were so many rats running round.

Read more about London with kids, including our hand-picked recommendations for family-friendly places to stay.