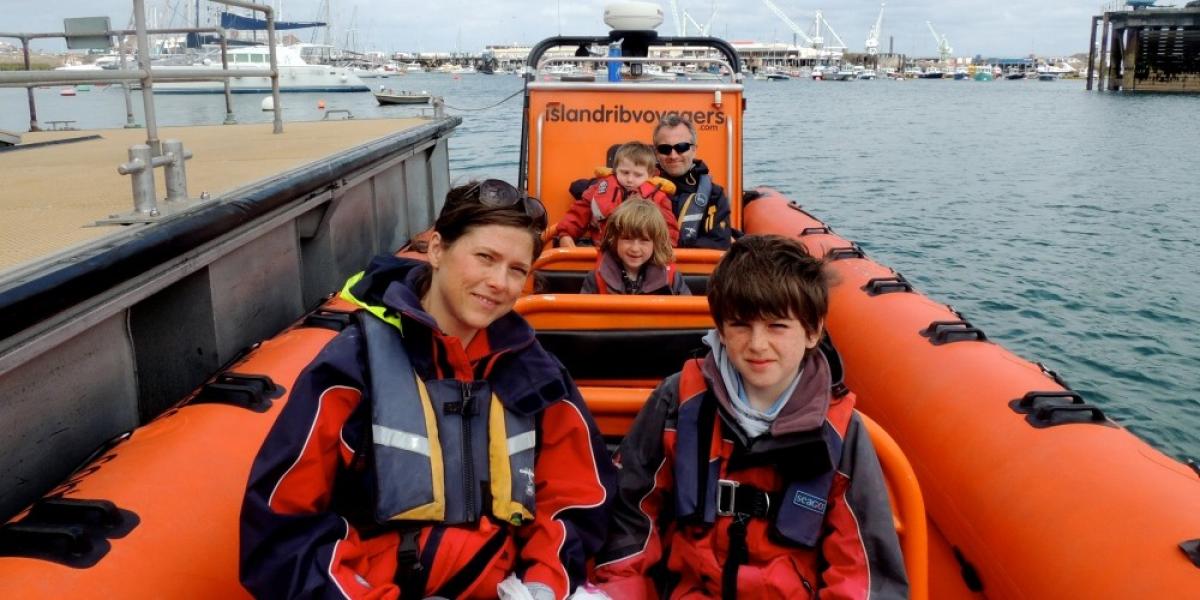 A Day Out on the RIB Herm Explorer, Guernsey

My son Ethan spots it first, squealing with delight, pointing towards the islet we’re heading for. It takes a moment for the rest of us to make it out, so perfectly does its silky, silvery greyness blend with the Channel waters in which it is bobbing.

We hoped to see seals when we set out over the choppy waters between Guernsey and the tiny neighbouring island of Herm, and now we have – there’s another playing on the rocks and then swimming off a second islet, where shags and other seabirds circle the two lighthouse-like towers that help navigation not by illumination but by alignment. We’ve also seen a lone puffin riding the waves – a very lucky spot indeed, since by this time of year they’ve generally headed north on stage one of their epic journey across the Atlantic.

The children are delighted by the sightings, but perhaps even better is the boat itself – a bright-orange Rigid Inflatable that takes us across the waters at high speed. For maximum bounciness, sit at the front; sit at the back and you’ll have a slightly calmer ride but you’ll also get wetter. Your driver might also spin you around in a tight circle, tilting the boat exhilaratingly but not so much as to properly scare you (the trip is suitable for everyone aged nine months and up).

The Herm Explorer normally takes just under an hour, but ours takes nearly double that because when we return some of the passengers to Herm itself, where there’s a single hotel, the increased swell makes it hard to moor. Still, the trip seems to pass in the blink of an eye, and when we step off the boat back in Guernsey’s capital St Peter Port, we all agree we’ve had an amazing experience.

The Island RIB Voyages office is a few minutes' stroll from Castle Cornet, another must-see with kids while in Guernsey, especially if you time your visit to coincide with the daily firing of the noon-day gun by costumed soldiers who are happy to pose for pictures with kids (and adults) afterwards. The island’s ancient harbour fortress, Cornet is now an ultra-family-friendly attraction with five museums (The Story of Castle Cornet Museum, Maritime Museum, 201 Squadron RAF Museum, Royal Guernsey Light Infantry Museum and The Royal Guernsey Militia Museum), four period gardens, kids’ dressing-up costumes, and free trails for various ages.

Castle Cornet has a very good café, but we also recommend heading up to Guernsey’s north coast to enjoy one of the island’s best beaches, Cobo Bay, and its unpretentious Cobo Tea Rooms, where you can feast on the likes of Guernsey gâche (fruit loaf), crab sandwiches, homemade cakes and luscious local ice cream – an afternoon tea certain to leave you with no appetite for dinner.

Read more about family holidays and breaks in the Channel Islands.