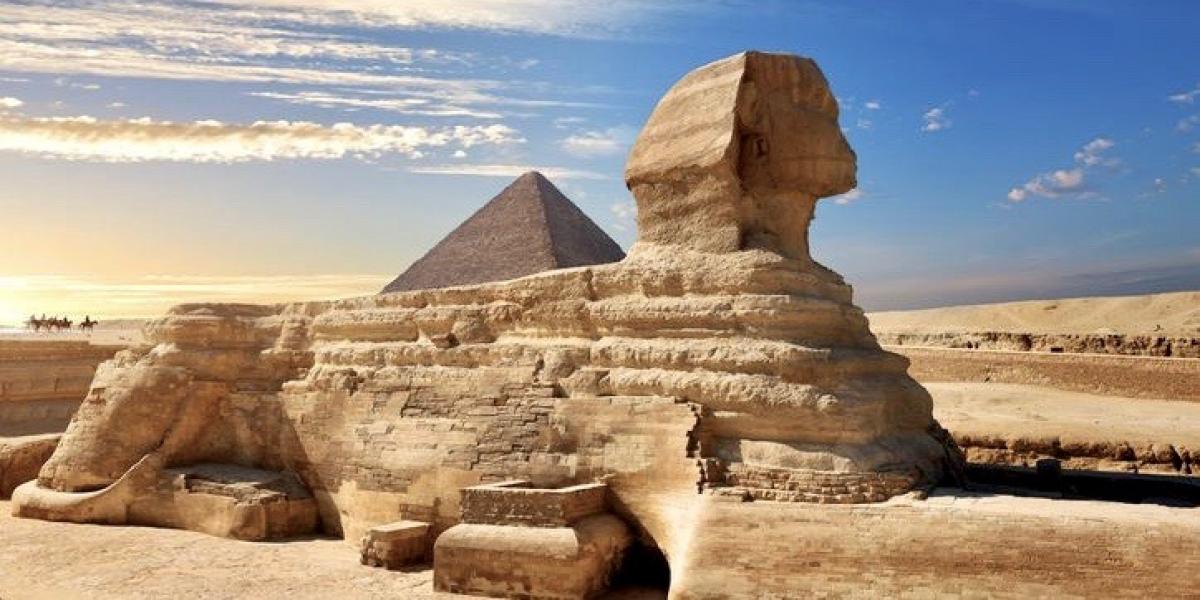 A Family Adventure Holiday in Egypt

There we were, sitting under the twinkling stars in the Arabian Desert, propped up on huge cushions in the open courtyard of a simple, traditional home. We’d crossed the Nile in a tiny boat and continued our journey in the back of an open truck, bouncing along what just about qualified as dirt roads. Now, as we waited to be served a home-cooked feast and children became skittish for the first time, one of them, Jake, turned to our son Henry and said: ‘Do you want to watch Outnumbered on my iPhone?’

This was our Egypt Family Adventure Holiday – a trip that takes in as much of Egypt as is physically possible in nine days, on the way offering a wealth of ancient treasures and experiences to modern-day youngsters.

We started in Cairo with the Pyramids at Giza, then headed to the teeming railway station for an overnight train following the Nile to Aswan. There we were barely able to get into our rooms before the gang – kids who didn’t know each other from Adam the day before – were leaping into the riverfront swimming pool. It was here that we had our dinner desert excursion and also an early-morning camel trek across the dunes. Then we took a day-long voyage on a felucca (a small traditional sailing boat), mooring amid the palms for a meal on deck followed by the rolling out of the sleeping bags for the night. I think it’s fair to say that the makeshift toilet proved as much of an attraction to the boys as any stone monolith.

On to Luxor, for temples and another riverside hotel, this one with a swimming pool actually on the river, aboard a barge. More temples ensued, as did a horse-drawn carriage ride through the busy streets and a dawn trip to the Valley of the Kings. The latter was astonishing – even the studiously laid-back young boys couldn’t hide their excitement as we tripped down passageways past wall paintings of crocodile gods, dog gods and just about every animal god imaginable, to end up in burial tombs deep in the rock.

This Adventure Company tour is an unerring combination of history and shameless fun – every time it seemed as though the kids were about to be templed-out, it was countered by a splash about in a pool. Our charming and erudite guide Mohamed (‘You can call me Nemo’) was equally at home playing pool games as telling us about Tutankhamun’s treasures in the Cairo Museum.

In a complete change of pace, we boarded our little bus for a manic journey over pale, imposing mountains down to the Red Sea coast. The growing resort of Hurghada isn’t a place that boasts much history; in fact, much of it is unfinished. Our fully-inclusive hotel, however, had a private beach and large pool. Our group of around 10 adults bonded over G&Ts before quite wonderful buffets of the sort that involve people cooking seafood to order, and slicing up hunks of meat. The children were history by this time – the boys had all found a nice table a fair distance away and the girls, almost teenagers, had found one even farther from us.

The following day involved a snorkelling trip (also included) during which we saw dolphins then lunched on the boat. Back at the hotel we flopped by the pool in the late-afternoon sun. When I pointed out that the free coffee machine at the pool bar also served hot chocolate, there were even bigger whoops from the kids than when we found the Luxor branch of McDonald’s. The surreal sight of a row of small boys with chocolate moustaches seems in some ways to sum up the trip – a never-to-be-forgotten blend of holiday fun and proper sights.

Read our more about or book your Egypt Family Adventure Holiday with Intrepid Travel.