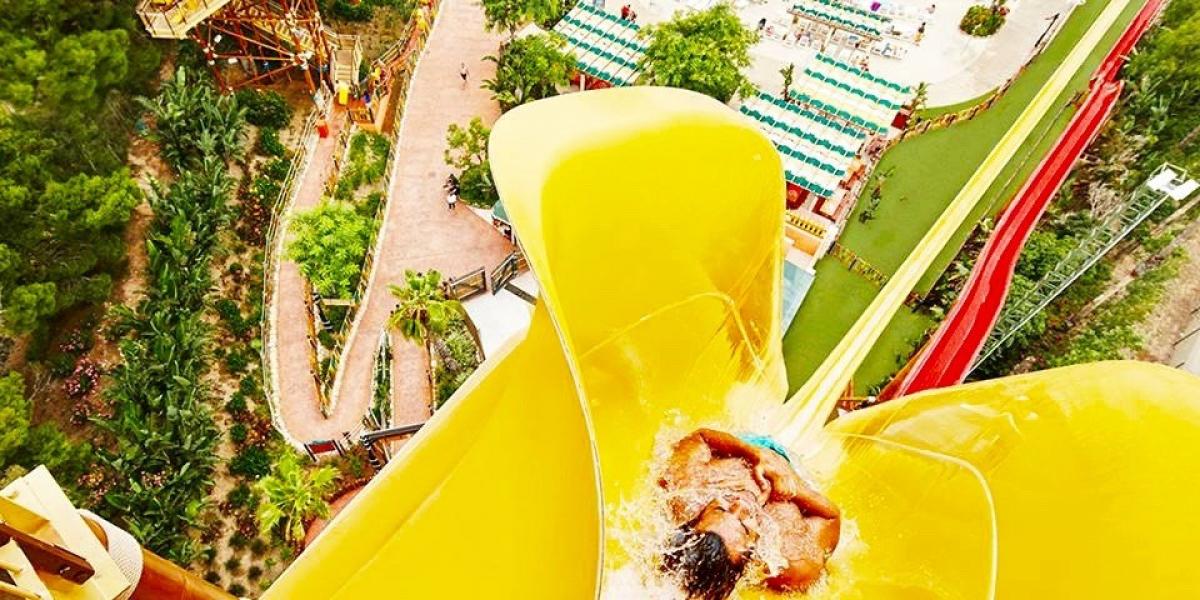 One in four of those who get to the top of King Khajuna turn back in fright, but I didn't even get as far as the upper platform before taking the easy way out on the lower-level multi-bump slide.

After opening its famous hypercoaster Shambhala, the Catalan theme park PortAventura invested heavily in Costa Caribe, its huge waterpark. My thrill-seeking eldest son Ethan was particularly keen to try out King Khajuna – the height of a 12-storey building, it opened as Europe's tallest freefall waterslide.

"The White Night event, when the rides stay open until 4am, allowed the boys to experience their favourite rides again in the dark… Wacky street performances, fireworks and hordes of excitable Spanish teenagers added to the party atmosphere."

Unlike me, Ethan veritably skipped up to the top and came down King Khajuna without hesitation – the youngest to do so on the launch day. He was exhilarated, saying that it had made him feel like 'a silver ball' and that it felt as if his feet had caught fire. He was annoyed at my cowardliness, but I redeemed myself by challenging him and his mates on the brilliant six-lane racing slide.

For Ethan's younger brother Zac there was plenty to do too, the best of them being the Sesame Street themed pirate boat with its various slides. Another highlight is the waterpark's brilliant, wild wave-pool, but there's plenty more besides.

With this three-night visit to PortAventura giving us plenty of opportunity to explore, we spent a decent amount of time in both the waterpark and the theme park. The highlight of the latter was the White Night – an occasional (four times yearly) event when the rides stay open until 4am. This allowed the boys to experience their favourite rides again in the dark and to enjoy the sight of SesameAventura, the younger kids' area of the park, magically lit up. Wacky street performances, fireworks and hordes of excitable Spanish teenagers added to the party atmosphere.

Our base was the fishing-village themed Hotel PortAventura (the theme park has several on-site hotels to choose from), with simple but pleasant bedrooms and two vast outdoor pools. With so much else to do, we didn't really have time to enjoy the facilities, but in future we'll think seriously about spending a week here to make the most of everything and to have some time to make a day-trip to nearby Tarragona or to Barcelona.

See also our review of a two-centre family holiday including PortAventura and camping on the Catalan coast.

Costa Dorada
Family-friendly hotel on the Costa Dorada, with free access to waterpark and themepark for all guests, plus large bedrooms and choice of on-site restaurants.
Find out more

Costa Dorada
First class holiday park just a short trip from Barcelona and PortAventura with great facilities for the kids.
Find out more

Costa Dorada
A Spanish holiday park with pools and activities on the beach.
Find out more