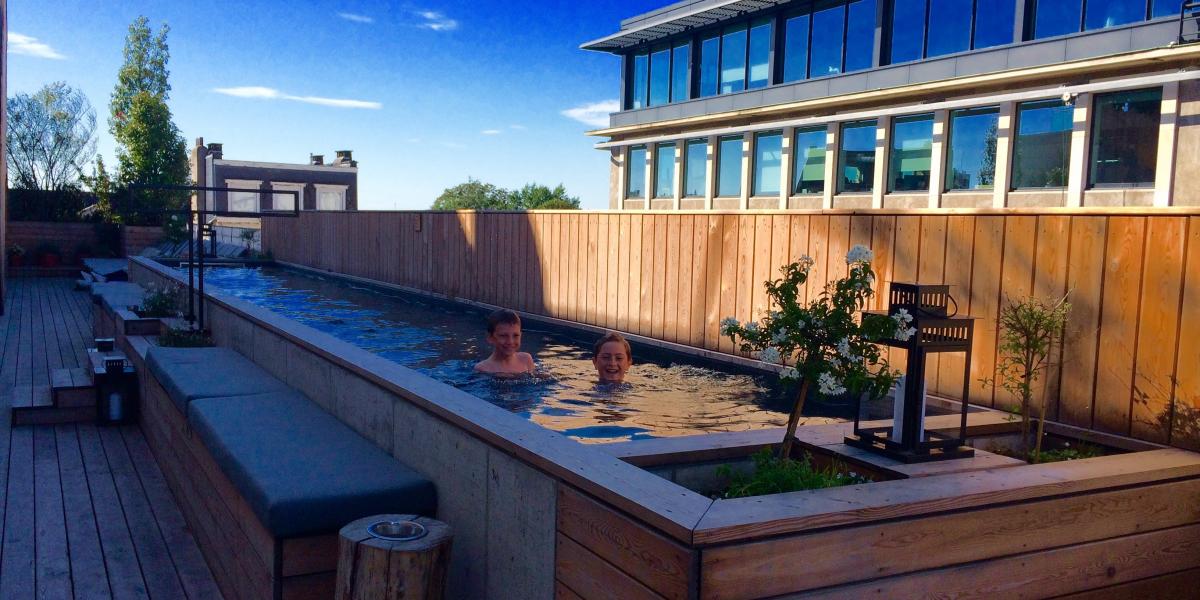 Finding a genuinely child-friendly hotel in big cities isn’t always easy – often you end up choosing something bland and uninspiring for practical reasons, but also paying through the nose for it.

For both of which reasons Jam Hotel in Brussels stands out. Just outside the centre (a 20-minute pleasant stroll from the main Grand’Place), this is a great-value option with doubles starting at just €45. For these kinds of prices, you get a funky, ingeniously designed room (some sleeping up to six), a rooftop pool and a vast basement games room, as well as a number of well-thought-out extras by request (for example: skateboards, scooters, a Belgium Monopoly board, and playing cards).

My sons were overjoyed by our room with its double bed and bunk-bed, the top segment of which was a ‘cabin’ bed with doors. Clambering up the ladder and shutting themselves in (and me out), they declared it the ‘sickest’ bed ever and that they absolutely had to have one like it at home.

They were equally delighted by the games room with vintage arcade games, table tennis and ping pong, all of which you can play for free – a great place to pass an idle hour or two before dinner. The hotel’s colourful restaurant is worth staying in for – the menu doesn’t seem immediately child-friendly (no child portions), but we were more than happy with our superior pizzas and pasta dishes.

Breakfast was less successful – although I was content with the array of fresh juices, breads, pastries, cheeses, hams and posh jams, the boys struggled to find much more than cereal and yogurt to eat. The fruits weren’t properly ripe and the croissants and pains au chocolat had some custard-like filling that they took violent exception to. Service seemed unfocussed too.

For parents, Jam’s main attractions are the two chic but child-friendly bars, one of them on the rooftop, with a sun-deck with lovely city views. The rooftop is also home to the pool, intended not for swimming but for relaxing. The boys found this idea a bit odd at first, but with temperatures soaring during our stay, they were pleased to have a place to cool off at the end of each day – and no one seemed to mind if they got a bit splashy (indeed, there were many families staying there at the same time, so the atmosphere was quite raucous and playful).

Located in hip St Gilles/Ixelles, Jam Hotel was the perfect place for exploring Brussels with kids. We used it as a base for visiting the Belgian Comic Strip Museum, some of the sites on the city’s Comic Strip Trail, and the Mannekin Pis, as well as for just enjoying some of the city’s culinary delights, from mussels and chips (in the child-friendly Ultime Atome, also in Ixelles) to waffles.

But equally, it was a fun place to hang out in its own right – perhaps a dangerous thing if you’re trying to get the kids out seeing the cultural sites, but ultimately preferable to a boring but overpriced option good only for laying your head for the night.