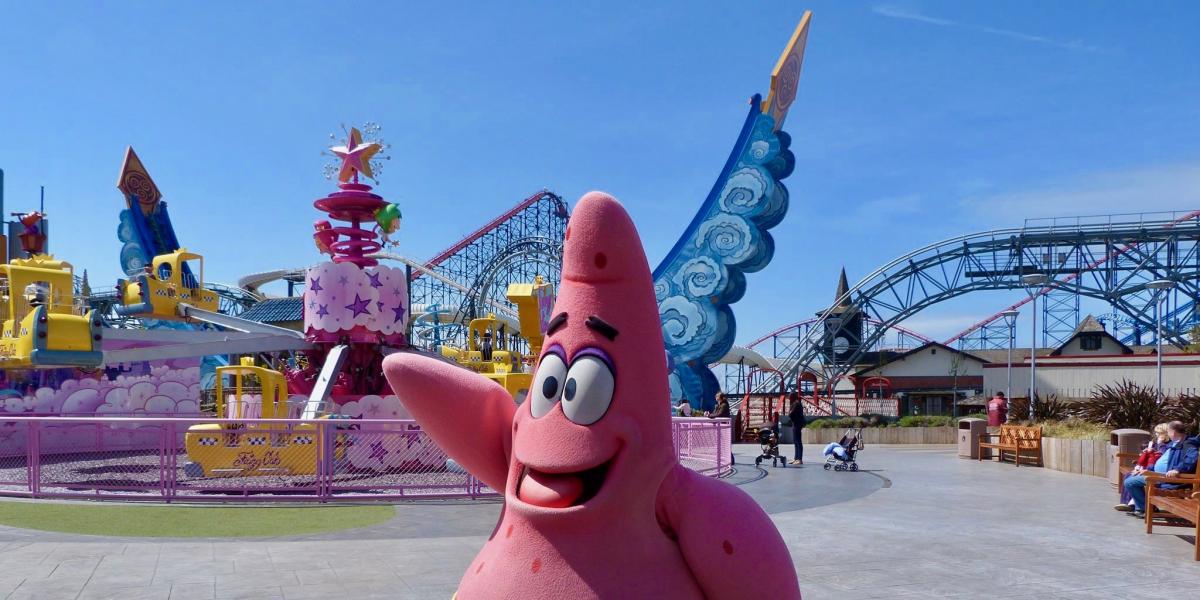 I last went to Blackpool more than three decades ago, for my birthday. I took my best friend and we stayed in a hotel. It was fantastically exciting to the 10-year-old me, and yet nothing I saw at Pleasure Beach this Easter rang any bells with me. All I remember from 1978 is one very high, almost-vertical slide, but I didn’t see any evidence of it on this visit.

We were in Blackpool for the inauguration of Nickelodeonland, a six-acre site within Pleasure Beach, with 12 rides based on characters and shows from the kids’ TV network. Yet not all of Pleasure Beach is new. In fact, some of it is very old indeed. Had I known, for instance, that the Grand National rollercoaster dates back to 1935 – which means it’s been scaring the pants off riders since before my parents were born! – I would never have clambered blithely aboard. In fact, I wouldn’t have gone near it had I studied it properly – from the entrance, it looks like a little kids’ ride, and it’s only when you get to the top of the first ascent that you see what this bone-crunching, somewhat rusty-looking coaster has in store for you. A gibbering wreck by the end, I could only stare incredulously at my eight-year-old son beside me as he cried ‘Again, again!’ before we’d even left our seats.

‘Spoil-sport Mum,’ he scowled when I had regained my powers of speech to the point where I could explain to him that wild horses wouldn’t drag me back on this ride that mimics the famous steeplechase – cars on two tracks race alongside each other over a series of stomach-lurching dips and climbs emulating Aintree’s 30 fences. It’s also – for the coaster geeks among you – one of just three surviving Möbius Loop coasters in the world.

Like the Grand National, the Wild Mouse is a traditional wooden coaster that looks well past its prime, having opened in 1958. The Ghost Train, which was the world’s first, opened in 1930 and gave its name to all such haunted rides, although inside it you’ll find lots of state-of-the-art effects that impressed my kids.

In fact, Pleasure Beach is a master of reinvention, with many of the rides within Nickelodeonland actually cheeky re-themes of existing rides. In keeping with its audience demographics, Nickelodeonland is largely for younger kids, with the exception of Avatar Airbender, a Zamperla Disco ride (lower height limit 1.2m) and the Nickelodeon Streak, beneath the sleek paint of which lies another classic wooden coaster (lower height limit 1.17m). Rides to delight tots include Diego’s Rainforest Rescue, the Bikini Bottom Bus Tour, and the Krusty Krab Order-up, with the main attraction visually if not in terms of excitement being SpongeBob’s Splash Bash, which is like a sedate classic teacups ride with the exception that riders drench one another with water. The Rugrats Lost River, a junior log flume, is also wetter than you’d expect – my toddler sobbed after being drenched head to toe, while I was left draining water from my new leather pumps.

I don’t remember where we stayed for my 10th birthday, so I wasn’t able to find out if my memory had let me down there too. In fact, this time we didn’t stay in Blackpool but in the tranquil surrounds of the gorgeous Forest of Bowland a half-hour drive away. But we did stop for dinner at Pleasure Beach’s very own, surprisingly chic Big Blue Hotel, the restaurant of which is suitably child-friendly if somewhat overpriced. The kids were certainly impressed by the hotel’s location right beside the Pepsi Big Max rollercoaster, and had we been staying over would no doubt have been thrilled by the family rooms with their children’s areas complete with funky bunk-beds and entertainment systems. I know that the 10-year-old me would have been. Who knows – I might even have remembered the experience.

Lancashire
A luxury glamping site on the edge of the Forest of Bowland, on a private country estate with a boating lake.
Find out more

Lancashire
Self-catering cottages and indoor and outdoor leisure facilities galore, all in a plum location for Blackpool.
Find out more