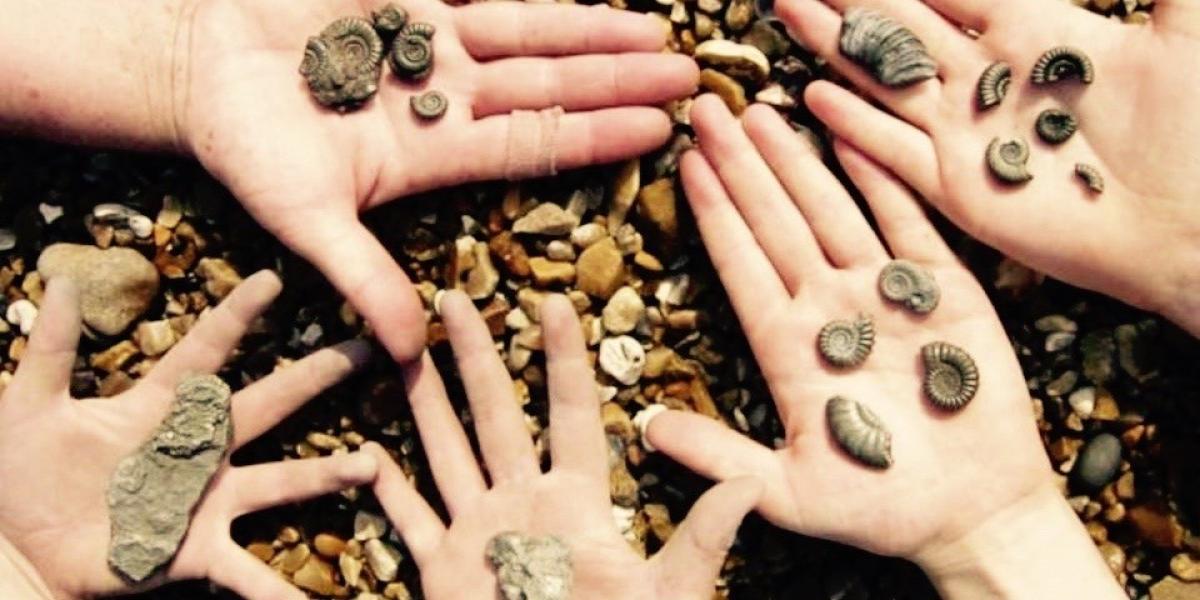 A Family Fossil-hunting Trip on the Jurassic Coast

So there we were, my toddler in the back, me at the wheel, barreling along the M3, building towards another triumphant chorus of his new favourite song: "We're going on a dinosaur hunt. We're going to catch a big one. We're not scared..." Trouble was, as it soon turned out, we were.

When I decided to take my son for a day's fossil-collecting on the Jurassic Coast of Dorset, I'd built into the plan a scene-setting stop at Dorchester's Dinosaur Museum. But when we actually arrived, we lasted all of five minutes. Though its life-size dinosaurs are more school art-club than Jurassic Park the movie, the background grunts and growls still proved too much for my particular two-year old. (I pointed out to him how excited the other children were, but in vain.)

Our dinosaur-hunting mission now hung by a thread. He was suddenly wary of the very idea of looking for fossils, understanding in his vague toddlerish way some sort of connection with the roaring monsters he'd just escaped. A quick rebrand was required, and that together with a nerve-settling pasty on a Dorchester park bench saved the day. 'Dinosaur bones' became 'special stones', and with zeal renewed we set off on our quest once more.

Ground-zero for the great dinosaur – sorry, special stone – hunt was to be Charmouth. Midway along the Jurassic Coast, it's a place where ancient beastie bits literally fall out of the cliffs – making it, I reasoned, somewhere even this dad-and-toddler combo stood a sporting chance of success. Which is why half an hour later we bundled out of our car in the village's beachfront car-park.

My son was keen to get going without delay and made a break for the fossil beds (actually, I think it was a family of swans that caught his eye). But I felt we were still under-prepared and persuaded him – by the simple expedient of picking him up – to visit the excellent free Charmouth Heritage Coast Centre first instead.

Declared a World Heritage Site, the 150km of spectacularly scenic Jurassic Coast between Swanage and Exmouth are an open-air text-book of geology. This is the story the Heritage Centre tells, concentrating naturally on the coast's most celebrated feature: Charmouth's own fossil finds. The centre perches above a doughtily traditional seaside café, but climbing the wooden stairs, my son and I entered an interactive world of rocks to touch, free-swimming fish, puzzles and games, and – most importantly – friendly wardens. It was one of these last who finally laid bare the full depth of my paternal incompetence, by explaining that fossil-hunting was best on a spring low tide.

"So high tide in early autumn is not so great?" was the best reply I could muster. Clearly not fancying my son's chances with such a berk of a dad, the warden rummaged beneath the counter and presented my son with two fossils of his own. She then briefed us on the fossil code (golden rule: never dig in the cliffs – they're dangerous) and showed me where our best chances lay.

If you're serious about your fossil search, hire hammers on Charmouth beach or join organised fossil walks from the Heritage Centre. My son and I adopted a different strategy. I'd brought his bucket and spade, so wherever he stopped to build a sandcastle, I'd flip a few rocks and scout around until he was ready to move on. Sometimes he would join in this new game, and within 10 minutes we'd hit pay-dirt with belemnites, crinoids and some fossilised worm-casts, all identified from our session at the Heritage Centre. We were hardly going to challenge the Natural History Museum, but he was thrilled, especially when he added a washed-up bottle top.

After an hour, a little cold and wet, we left for tea at nearby Lyme Regis. Full of galleries exploring the line between art and tat, Lyme is a small Dorset resort that's pretty enough to think it's in Devon. Famously, it's also the place where Meryl Streep stared out to sea from the harbour wall in The French Lieutenant's Woman. My son, however, was more interested in the ice cream.

Refuelled, we took a short walk round the steep streets of pastel-washed cottages then called in at Dinosaurland, Lyme's own dinosaur museum and fossil shop, housed in a converted non-conformist chapel. Perhaps it was the absence of sound effects, but my son was much happier than in Dorchester.

I was happy too. After a shaky start, we'd both enjoyed our day in the open air, learning lots of stuff and trying our hand at something new. Faced with the long road home, my only regret was not having decided to make a weekend of it, especially as child-heaven luxury hotel Moonfleet Manor is so close. Still, to celebrate our grand adventure, I decided to splash out on a big swirly ammonite as a keepsake for my son – a 'special stone', you understand, and definitely nothing to do with dinosaurs, oh no....

Read more about family holidays and breaks in Dorset, including things to do with kids and child-friendly places to stay and eat.