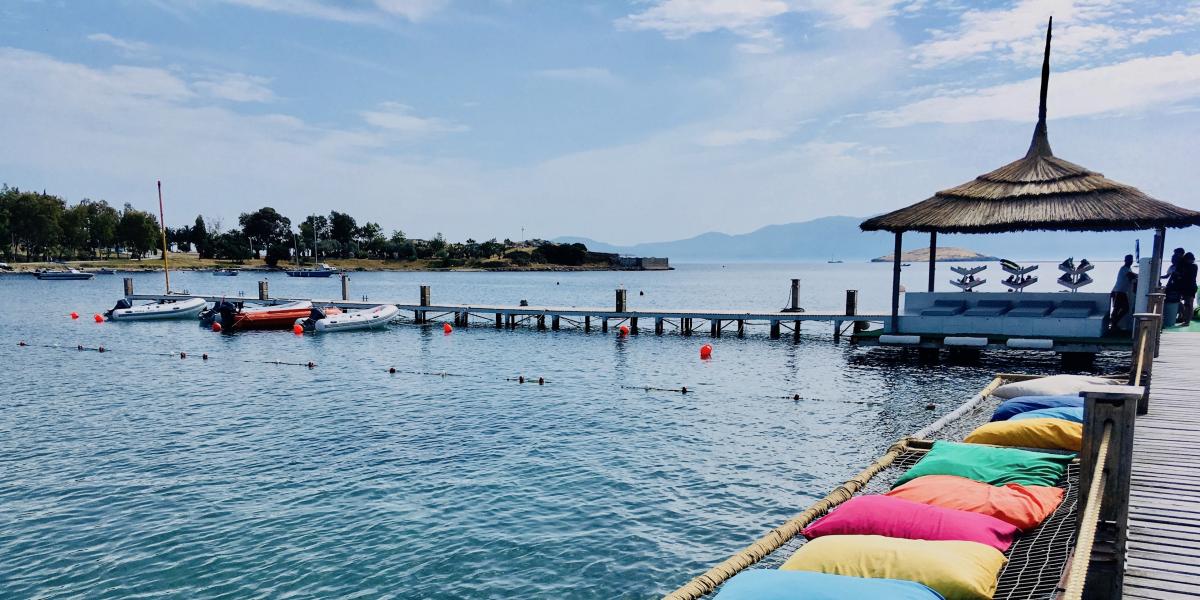 Bollywood zumba, electro swing and hatha breathing… These are just three of the fabulous classes devised by Mark Warner’s talented and creative fitness guru Mia in their resort on the west coast of Turkey. Hosted in a dedicated open-air exercise pavilion overlooking the pool, they're available for free as part of your mainly full-board package*, making this a very healthy holiday for parents who want to keep up a fitness regime or perhaps kick-start a new one while their kids are having lots of outdoors fun.

The latter was very much the case for me, and I was delighted by the combination of lots of complimentary on-site activities, including SUP paddleboarding, cycling and tennis, good, fresh, mainly Turkish cuisine based on local vegetables, and a great spa with local therapists offering authentic native treatments including peelings and Turkish bath rituals.

"There’s a luxe feel to the resort, with daybeds and cabanas in plentiful supply around the pool and along the beach, which arcs around a dreamy bay with views of nearby islands."

My boys are well versed in Mark Warner’s renowned childcare, which is also included in your holiday price save for ages four months to two years, for whom there’s a small supplement. With older children such as mine, the childcare takes the form of mainly outdoors activities, all supervised, including kayaking, sailing, windsurfing and tennis. Teens can dip in and out of what interests them. There are also a few extras that you can pay a bit more for, including waterskiing and wakeboarding, which are brilliant for older kids who relish new challenges.

Part of the crèche and kids’ club, which has its own pool, is housed in an attractive stone building reminiscent of a castle. Rooms, meanwhile, are either in the main building or scattered in low-storey buildings dotted around the grounds. They come in all shapes and sizes, from simple doubles and twins (with interconnecting options) to eight plush ‘villas’ (not self-catering) with a double and a twin room but the ability to sleep up to seven with the use of the sofa-bed, an extra bed and a cot. Our favourites, however, were the family rooms nestled beneath the main pool terrace, with a double bed and a cute little nook housing bunk-beds. Decor in all rooms, suites and ‘villas’ is fresh and simple but stylish, with pale colours, painted furniture and pretty bathroom tiles.

Outside there’s a luxe feel to the resort, with daybeds and cabanas in plentiful supply around the pool and along the beach, which arcs around a dreamy bay with views of nearby islands. But my favourite spot was the colourful beanbags on the nets affixed to the long wooden jetty – a great place to soak up the last rays of the setting sun.

The large canopied bar is the perfect setting for a sneaky sundowner but also doubles as lunchtime and evening bistro that’s chargeable. We had a lunch here and were impressed by our Aegean salad, grilled halloumi burger and lamb kebab, all at reasonable prices (an average of about 40 Turkish lira or £6.50)

Otherwise, meals are taken in the airy main restaurant with its copious buffets featuring something for all tastes, including plenty of fresh salads and local vegetable dishes. Breakfast is also a good buffet, including fresh-squeezed orange juice, pancakes and eggs cooked to order. You get the choice of eating indoors or outside, on a terrace overlooking the large main pool and adjacent kids’ pool.

There’s a huge amount to do on-site, but it’s worth venturing out to take in some of this rugged coast, if only for half a day. You can walk, take out Mark Warner bikes (with ages 13 and up) or catch a cab (€2) or dolmush (an even cheaper shared taxi) to nearby Foça, a laid-back little harbour town with a rich trading history visible in its historic remnants and a lively restaurant and bar scene. We loved Deniz restaurant right on the harbour for its whole seabass and its great desserts including opium-seed cake with white mulberries and cherries.

For me, Phokaia – which until two years ago was a popular Neilson resort – is a great alternative to Mark Warner’s flagship resort, the Levante Beach Resort in Rhodes. With the Levante always booked up in the school holidays, the Phokaia appears to be of the same kind of standard but with a character all of its own. It’s slightly less chic and perhaps a little cosier than the Levante – a feeling reinforced by the predominance of Turkish staff, which is often quite rare in such resorts. The one-hour 45-minute transfer from Izmir airport is much longer than the Rhodes transfer, but it does give you the chance to see some of the different vistas of this compelling but relatively untouristy area of western Turkey, whether it be Izmir itself with its juxtaposition of sparkling modern towers and spindly minarets or rural olive farms.

Read more about Mark Warner’s Phokaia Beach Resort and book now. It’s worth noting that the resort also has a indoor pool, making this a great option for May half term and October half term when the weather may not be as reliable as in summer.

* All meals are included except two nights a week, when you can sign up for the beach BBQ or dine out in Foça.