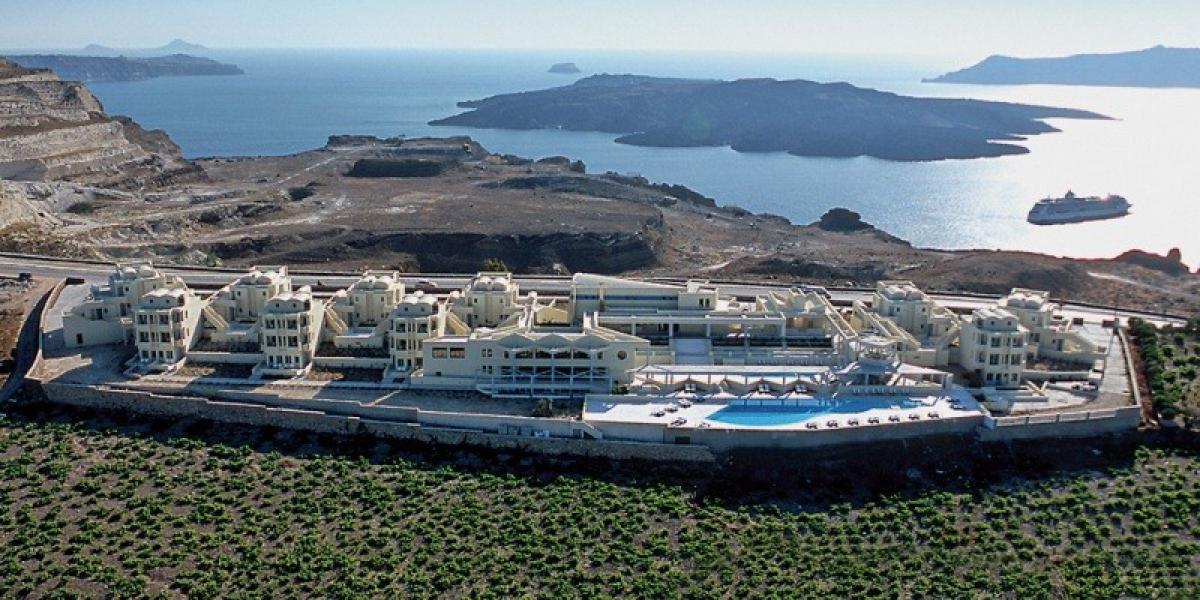 A Family Holiday on Santorini

A holiday can be such a cliché – white sand, Factor 50 suncream, family tiffs. It’s like a cake you’ve baked so often you no longer need to read the recipe. All the ingredients are there. It usually works out.

The Greek island of Santorini – a convenient direct flight from the UK – is a recipe for that holiday. Its main ingredient is the spectacular sunset seen from the top of its curved, craggy, cliffy coastline. It must be one of the most snapped scenes by families on holiday, including us.

We stayed in the Majestic Hotel a few minutes stroll from the main town, Fira. A exercise in understatement, its stark, sharp lines and its pool, so perfectly azure we didn’t believe it was real water, made it look like the setting for a James Bond movie. The only difference was that it was donkeys, rather than limousines with hidden weapons in the exhaust pipe, that clattered past on the road leading into town. There was, however, a movie star of a bar-tender who worked the poolside bar at night. George made it his job to introduce new arrivals, so that no one had to speak to their own for very long.

But the best bit was the cake for breakfast, which we declared ‘traditional’, meaning we had to indulge in it for edu-vacation purposes. There were other things to learn, too. The island’s gibbous moon shape was formed by a cataclysmic earthquake, which caused half the land to sink into the sea and create a cliff-lined coast. That must count as a geography lesson. We watched the sun descend into the sea covering the underwater crater from a clifftop deckchair at Franco’s bar in Fira. As if it were a museum of sacred objects, customers at Franco’s are asked to turn off their mobile phones, so the full power of the setting sun is uninterrupted by a Rihanna ringtone. The whitewashed buildings turned pink, as if being painted by a giant invisible brush. We could see all the way to the neighbouring town of Oia, its low white buildings and blue church domes spread over the top of a cliff as if icing on a cake.

This scene could quieten even my kids. But the natural magic was interrupted not by sound, but smell. The whiff of donkey poo was blown up the cliff by the island’s fierce wind, settling on Franco’s. The donkey stalls were just below, where you took steep rides down to the shore. For such a small island, Santorini has a lot of forms of thrilling transport. There are not only donkeys but also a cable-car to transport you down to the water. Taxis are relatively cheap, and buses frequent and reliable. We could get almost anywhere – even to the newly-opened archaeological site of Akrotiri, Santorini’s own very own Pompeii, where can walk along 3000 old streets and play Spot the Bronze Age Toilet. If that’s not an edu-vacation, I don’t know what is. And when you tire of learning so much, there’s always the beach.