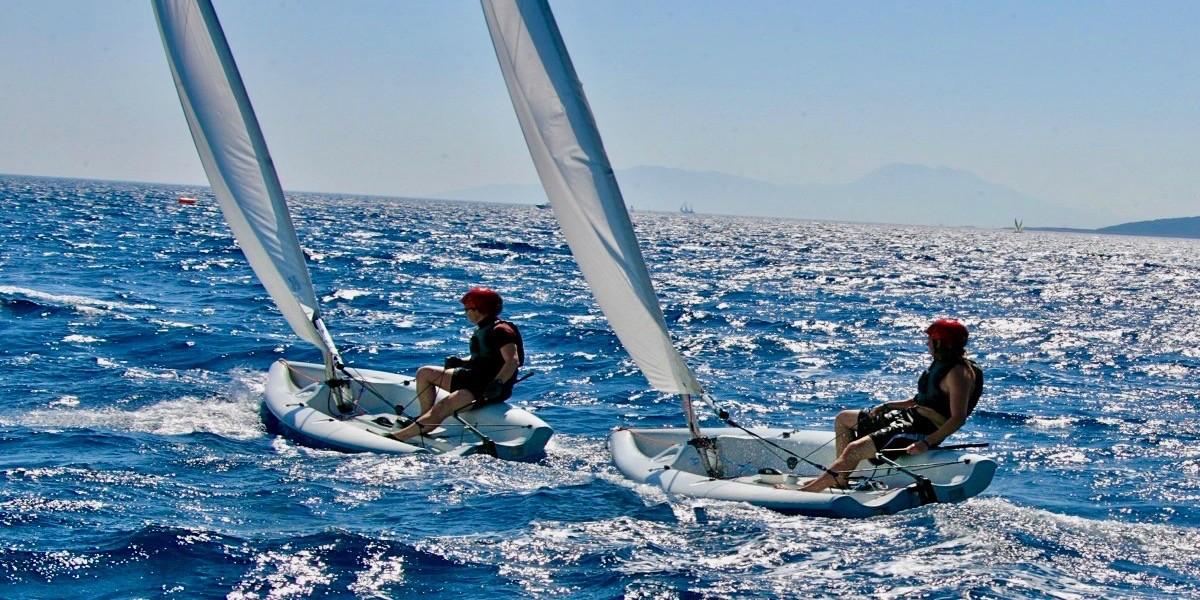 A Family Holiday at the Sea Garden Resort, Bodrum, Turkey

As my two brothers, Dad and I flew over a turquoise sea covered in small sandy isles, I knew that this was going to be the time of my life. Stepping down from the plane, I gasped in the heat. Mine was followed by my little brother’s more highly pitched yet dreamier and quieter gasp, a slightly louder one from my older brother, and then a massive roar from my dad. We waited for the bus to take us to the Hapimag Resort Sea Garden beneath a cloudless sky the same colour as the sea, with a massive burning yellow ball beating down on us.

We got to the resort and did another gasp sequence because of the heat and also because of that turquoise sea dotted by sailing boats and the luxurious resort itself. The first thing I did was strip into my swimming stuff and sprint down the sandy beach into warm, relaxing water filled with tropical fish with electric-blue bodies and bright, green heads, or sparkly silver bodies and yellow heads.

I then sadly swam out of heaven and headed to the restaurant. But as soon as I saw the massive buffet I started frothing at the mouth – I had had no idea there was so much seafood in the sea, including handsome blue lobsters and fish of every sort, while the meat selection tempted even a vegetarian like myself, and the puddings looked delicious.

I soon realised why Dad had booked this holiday on Turkey's Aegean Coast – there was every activity you could want: windsurfing, sailing, kayaking, swimming, diving, squash and tennis and about a thousand more!

The first morning I went to the kids’ club; the people in my group were lovely and almost immediately I made three friends I stuck with all week. One of the first things we did was sailing – amazing, and one of the most fun things about Turkey. We also played quick cricket and rounders the next day, and throughout the week did windsurfing, sailing and kayaking and more.

It was a brilliant week. My little brother Dan learnt to swim and dive and my older brother Patrick became hooked on catamarans. And I think I am definitely going to suffer watersports withdrawal back in the UK – and miss the gorgeous weather too.

Joe’s Dad’s Take:
The Sea Garden Resort, 40 minutes from Bodrum airport and a 3.5-hour flight from London, is part of the high-end Hapimag chain, and this Swiss heritage is immediately apparent in the way it's run and maintained.

My kids participated selectively in organised activities, had fun and quickly made friends. I could therefore divide my time between enjoying their company and putting the rescue boat to heavy use (worth half the cost of the holiday alone!). I rediscovered windsurfing after a 15-year break, but only in one direction. I braved my first catamaran ride and nearly ended up in Greece.

My companion, a fellow dad, had fraudulently (despite being a lawyer, or perhaps precisely because he is one) sold me his seamanship credentials by contending that his frail and elderly mother had planned to accompany him on the boat but had ended up looking after her grandsons. She still owes me a pint for sparing her. We lurched at breakneck speed into international waters, and I quickly learned that sailing in these conditions with two novices at the helm would also be a one-way experience without forcing turns by flipping the boat on its side. We persevered, however, and loved the organised racing at the end of the week, complete with certificate.

As Joe notes, facilities at the Sea Garden cater brilliantly for all tastes – even my sons’ crazy mission to compete against each other repeatedly at squash in 40°C heat. For our family the week was a military operation, with almost every minute accounted for. Others chose to while away cloudless days at a gentler pace. At the Sea Garden, you can do as much or as little as you like.