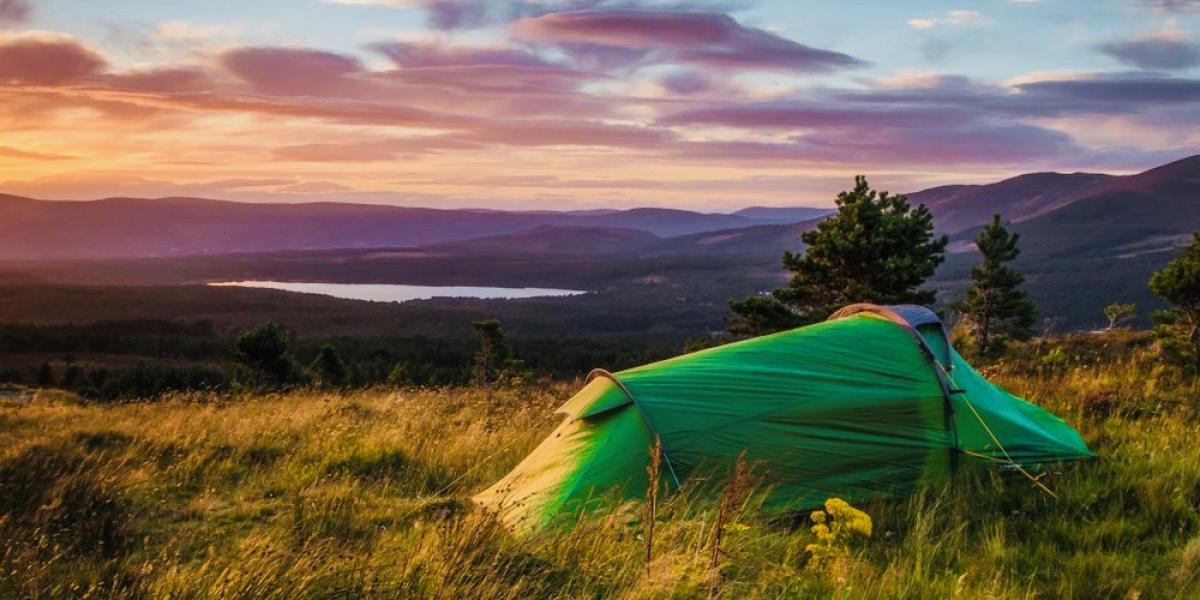 It's a fact of parenthood that teenagers want to break free. And that goes for holidays, too. The museum-trudge staycation or the traditional fly-and-flop package in the sun is a hard sell to offspring once they’re no longer pliable pre-teens. Teenagers want to do more living on the edge, whether that be jet-skiing, binge-drinking or hitting the Ibizan disco scene. To some extent, as parents of young adults, you just have to accept this urge and leave them to it – for trying to do it with them would be, frankly, sad. But I have discovered something that I can share with my teenagers, and it doesn’t cost an arm and a leg. In fact, it costs practically nothing at all.

In its modern manifestation, ‘camping’ is a rather tame affair including all creature comforts, in highly organized campsites with all kinds of facilities provided and hardly a scrap of canvas visible. But there is another side of camping, where the site is unknown, and when you find it, it’s yours alone. This wild camping has an element of unpredictability, a sense of breaking free of the constrictions of society, and an exhilaration at being alone at the heart of nature.

'Not a single house was visible, near or far, and nor was there any sound other than that made by the stream, the sea and the wind in the trees. In fact there was one other resident, a big dog otter who looked decidedly grumpy at our arrival, and reluctantly disappeared away down the village stream.'

It’s at its best in Scotland, where it's completely legal. Camping here has been a statutory right since a new Outdoor Access law passed in 2005, although it does need to be done responsibly. That means choosing an unobtrusive site and avoiding enclosed fields of crops or farm animals. Campers are also encouraged not to stay longer than three nights and to take away all rubbish when they go.

Our first wild camp was unobtrusive to a massive degree. In fact, we got there by boat (you would have been hard pushed to get there any other way). It was on the Isle of Skye, and the place we’d chosen was an old village, abandoned in the Highland Clearances, where the locals had once survived on a diet of potatoes and fish. The half-hour motor around the shore in the boat was a great deal easier than the 90-minute slog over boggy hills on foot would have been, but even so it was still quite a schlepp hauling the boat up above the high-tide mark and transferring all the gear across the hillside to find a suitable spot for the tent. And then there was the urgent need to collect firewood before nightfall, in order to cook our supper.

In the end, it couldn’t have worked out better. The site we’d chosen was a flat, sheep-cropped bank of the village stream, sheltered by a couple of stunted rowan trees and the ruins of three houses. In front of us the sea spread right and left, with the island of Rhum in the far distance, and behind us the land rose up to a high escarpment where we knew that eagles lived. Not a single house was visible, near or far, and nor was there any sound other than that made by the stream, the sea and the wind in the trees. In fact there was one other resident, a big dog otter who looked decidedly grumpy at our arrival, and reluctantly disappeared away down the village stream.

We cooked our dinner over an open fire, which itself is very satisfying, and then sat around the embers as darkness closed in, aware that the smoke was saving us from the midges. A silent owl settled on one of the trees and watched us for a while, and then it was time to retreat to bed.

We only stayed for two nights, but by the time we returned to civilization, the kids had really got a sense of the isolation, the stillness and the beauty of such majestic wilderness; they’d gathered fuel, taken their showers under a waterfall, and tried unsuccessfully to catch fish. We were hardly self-sufficient, but they’d got an inkling of what life for their forefathers must have been like.

In England, this kind of wild camping is not so easy, but it can be done, provided you’re discreet. Publicly owned land is the obvious choice. I’ve travelled down the Thames, again by boat, camping on islands and on the riverbank amongst some of the prime real estate in the UK. On this occasion, in choosing our sites we were very careful to make discreet enquiries of lock-keepers, to arrive late in the evening and depart early in the morning, to make no fires and leave as little trace as possible of our presence, and of course we were very careful not to pitch our tent on anyone’s private estate. We did no harm to anyone or anything, although one or two early-morning joggers were slightly spooked to find a tent by the towpath.

The exhilaration in this sort of camping was not so much about the wilderness – we camped one night right by the main Reading-to-Oxford railway line, and another by the Marlow-to-Maidenhead dual carriageway – but about the sense of doing something slightly below the parapet, and getting away with it. And frankly, that’s the kind of thrill that teenagers enjoy. This particular parent does, too.

Find out more about family holidays in Scotland.