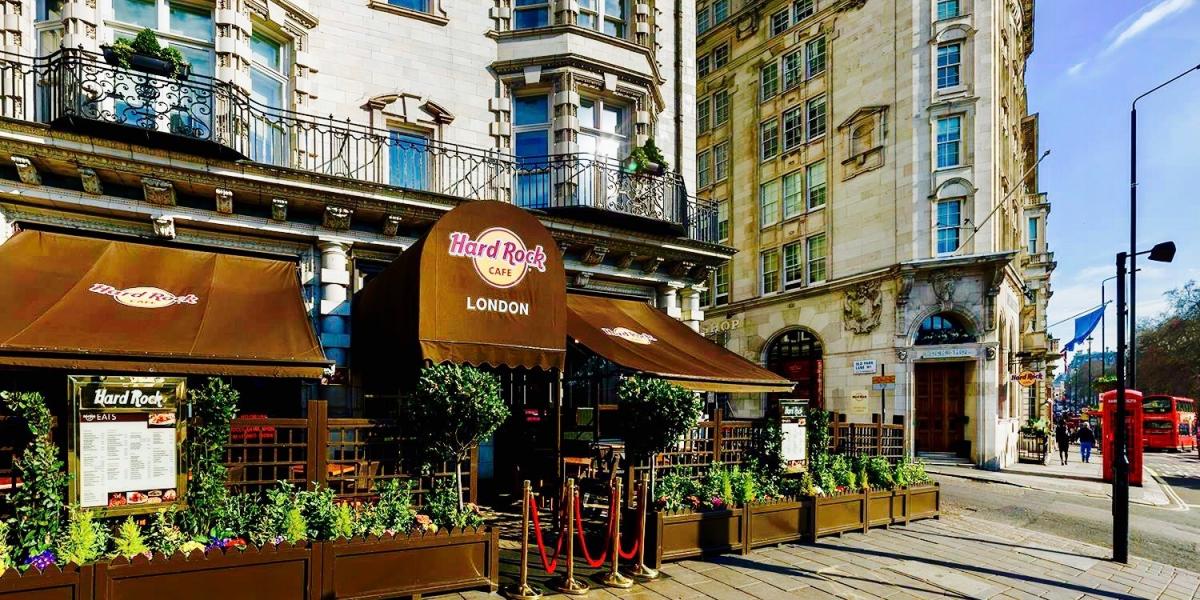 A Family Meal at the Hard Rock Café, London

Another time always seems tastier than today. Food is one of our strongest links with our past. I remember my favourite meal as a child – a mound of mashed potato with a fried egg on top and a sausage standing upright in the middle, breaking the yoke. I called it a Volcano.

Early hungry forays outside our home are also among our most vivid memories. I remember dining at London’s Hard Rock Café in the ‘70s, just 15, the same age as my eldest daughter now. I thought it was the coolest place I’d ever been; I thought I was the coolest teenager there’d ever been. I experienced (and that’s exactly the right word) my very first seeded bun beneath Eric Clapton’s guitar. So I wanted to take my teenager Storme there and reminisce over a Legendary 10oz Burger.

‘Eric Clapton’s guitar!’ I screamed, pointing to the instrument hanging on the wall. ‘It’s still here!’

Our shared Hot Fudge Sundae (you can only manage one between two) arrived as it always did – in a tall rippled glass, topped with whipped cream, melted fudge and a single bright-red cherry on a stalk. ‘Cool, eh?’ I offered. And we chatted about what it was like when I was her age, and Hot Fudge Sundae an exotic dish.

My own mother has taken me on such nostalgic culinary trips. She was brought up in Liverpool, so we went back there for the weekend, staying at the Holiday Inn directly opposite Lime Street station and within walking distance of everywhere we wanted to go. We drank furry coffee on the ferry across the Mersey. We hunched over bowls of Scouse (Liverpool’s version of Irish stew). It was while stirring a cup of milky tea, that my Mum began, ‘I remember …’. We bonded over bacon butties. Perhaps the grease made the words slip out more easily.

Which shows that eating out is almost never about what’s on offer à la carte, but about where we are and who we’re eating with. I wonder which meals out my own kids will remember most. I hope not last month’s doughnuts.

Read more about things to do in London with kids and check out our recommendations for family-friendly places to stay.