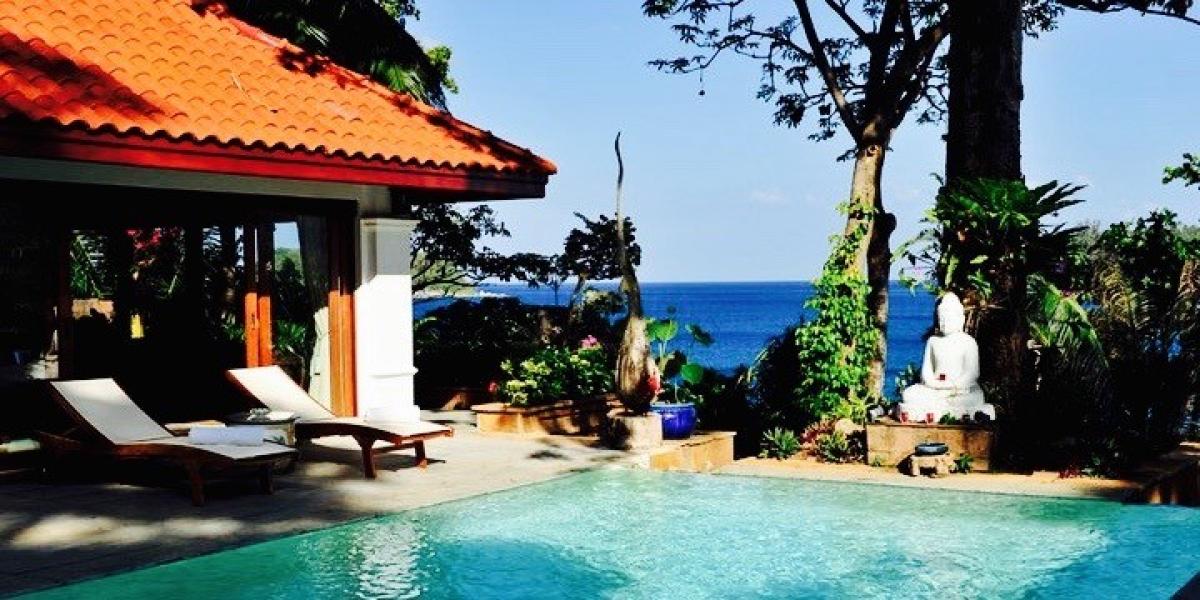 As far as last-minute plans for a credit-crunch-beating summer holiday go, ours wasn’t a bad one: Rent a cracking villa with another family, share the cost, live the millionaire lifestyle for less…

The only problem was: where? Exorbitant European rental rates made a two-week stay somewhere half-decent on the Continent as likely as the Euromillions win we’d need to finance it. (One operator emailed to offer a ‘fabulous price of £5,000’ for a week’s self-catering in Mallorca excluding flights. Ouch!)

The trick was to focus further afield… much further. Skyscanner revealed flights to Bangkok with Etihad for only £400 each – exactly what unfortunate friends had just paid for flights to Bordeaux in France – and connecting AirAsia flights to Phuket, Thailand’s largest island, for just £30pp.

Now, Phuket’s rainy season runs from May to October, but, typically, June through August sees brief, intense downpours interspersed with plenty of sunshine, and temperatures regularly hitting the low 30s. It’s the locals’ favourite time of year – the air’s clearer, the island is less crowded, and everything (luxury pads included) is cheaper…

I’d like to say I found a phenomenal villa with just one mouse-click, but what followed was a week of frenzied surfing, emails and research via sites such as TripAdvisor and, less obviously, Youtube (great for villa/holiday videos). Hundreds of villas were still available (it felt like I ‘virtually viewed’ them all), but one stood out: Baan Kata Keeree. At various times deemed one of the best villas in the world by The Sunday Times and Condé Nast Traveller, the six-bedroom property started at around £1000, but with only eight in our gang, and a week to go before our arrival, there was clearly a deal to be done. A decidedly un-British level of haggling later and we had a killer villa for a steal. (Modesty, and the owner’s request, prevents me from revealing exactly what we paid – but a comparable European property would have easily cost four times as much.)

Quite the loveliest holiday home we’ve ever dragged downmarket by our presence, Baan Kata Keeree had everything two picky families with four kids under the age of 10 could need, including an enormous pool and Jacuzzi, oodles of outdoor space, a playroom, a serious gym and a superb seafront location. I spent the first day wandering around just going ‘Wow!’. It was plush but not uber-luxurious, however; there were Oriental antiques, iPod docks and flatscreen TVs throughout, but the relaxed, homely vibe meant we didn’t freak out every time the kids touched anything (a blessing given the youngest was only three).

But the USP for four shattered parents had to be the fantastically considerate staff of eight, including a butler, gourmet chef and villa manager, who attended to our every whim, dished up the best Thai food we’ve ever tasted and ‘kid-sat’ at the drop of a hat. Eating at the villa proved incredible value, with everything – from rambutans to mojitos – charged at market cost. Provided they know how to cook it, the kitchen will prepare whatever takes your fancy. We invariably left ‘ordering’ to Boom the butler, who ensured delicious Thai banquets that everyone, including nine-year-old Shaun, a celiac, could tuck into. (As Shaun’s relieved mum put it: ‘This is the first holiday where I haven’t worried about what he’s going to eat.’)

A car and driver were included in the package: we simply paid for petrol (cheap), making exploring a cinch. Big Buddha, the 45m statue of Buddha you can see, high in the Nakkerd Hills, from the villa’s terraces, is a must, but we also investigated countless beaches. Nearby Nai Harn was great for wave-jumping, while Friendship Beach in Chalong Bay had great food and even better crab-spotting (when the tide went out, the sands literally shivered with them). But the winner by far was Laem Singh, halfway up the west coast, where a steep path through the jungle led us to an emerald bay and a magical impromptu football match with local boys, Ali and Mohammed. Did it matter that it tipped down halfway through? Did it hell.

That said, if you want to stay put you couldn’t be better placed. Situated right on the southern tip of one of Phuket’s finest beaches, Kata, the villa feels totally secluded yet is just minutes from the sights and sounds of the bustling resort. The kids loved the (overpriced) Dino Bar with its Jurassic setting and themed mini-golf; the adult vote went to the chilled beers and vibe at the tiny Ska Bar, on the beach just below the house. But all of us, kids included, agreed that the best way to wind down was a visit to Kata Big Rock II (next door to the Sugar Palm Resort), where phenomenal massages cost just £5.

On our last night, as we sat out on the villa’s decking, watching the sun set over surfers determined to catch the last waves, we couldn’t help but feel rather smug, But then it hit me: we’d never be able to show our ‘Bordeaux’ friends our holiday snaps. They’d spit teeth.

How to Live Like a Millionaire in Thailand
• Don’t be afraid to travel out of season, but do research the climate carefully. ‘Rainy season’ can mean anything from occasional heavy showers to hurricanes.

• Haggle. So unBritish, we know, but you’ll have to do it in Thailand, so you might as well get practising. Also, play villas off against each other and get them to match or better competitors’ prices.

• Hold your nerve. If you want the best villa deals, you may have to wait until a week or two before travelling.

• Save money by booking indirect flights. We flew via Abu Dhabi, and, while it added to the overall travelling time, breaking the journey allowed us to stretch our legs, get a meal and even do some shopping. Also, choose your airline wisely. Long-haul with kids doesn’t have to be a killer, provided there’s good in-flight entertainment and seat-back screens. Etihad, with its individual touch-screen consoles, proved a massive hit with everyone, from the three-year-old up.

Find out more about family holidays in Thailand.