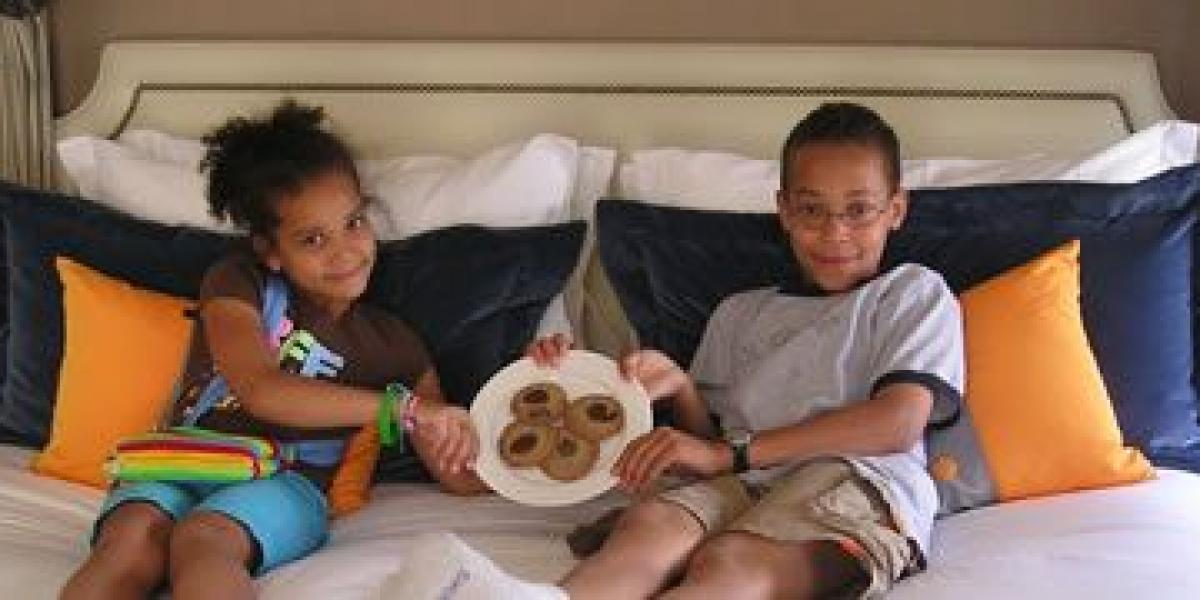 The girls, Candy and Cindy, got along swimmingly, providing an alternative to my grandkids’ pillow-fights during a two-day getaway at the Hotel Monaco in Old Town Alexandria in Virginia. Sharing hotel space with fish – other than grilled salmon or lox on a bagel from room service – was new to us. That more and more hotels are pet-friendly is yesterday’s news, and passing four-legged, leashed guests in lobbies, lifts and hallways hardly raises an eyebrow. But goldfish? – a first.

I’d chosen Old Town Alexandria, 9km south of Washington, DC yet worlds away from politics and pork barrels, for a break with my eldest grandkids, Joshua, 11, and Jaymie, 8. Not wishing to spend hours in the car or pay a king’s ransom for a tank of gas, I sought a destination within an hour of  the U.S. Capitol and their home in the Maryland suburbs. Talk about a no-brainer! We hopped on Metrorail (DC’s subway) to the King Street station then took a free shuttle to the Monaco’s front door.

I like easy. And walking everywhere was a pleasure.

The Kimpton Group knows how to appeal to visitors’ sense of fun. And the Monaco, which opened in April 2008, is no exception. As part of the Kimpton Kids program, Cindy and Candy provided a welcome diversion and alternative to time-outs when the kids got on each other’s nerves. An easel and chalkboard with plenty of coloured chalk –and a plate of yummy chocolate-chip cookies – appeased the children’s artistic and snacking needs.

After a Scavenger Hunt (the clues linked to George Washington, the first US prez, who worked in Alexandria as a surveyor’s assistant before moving on to bigger things) and a finger-licking lunch of BBQ and ribs at King Street Blues, we cruised the Potomac on the Admiral Tilp. We also visited the Torpedo Factory, an artists’ co-operative in an old munitions warehouse, and the Alexandria Archeology Museum within the same building.  The kids were less than eager at my suggestion, certain that it would be boring. Two hours later, I had to drag them away. Watching painters, sculptors, ceramists and stained-glass artisans doing their thing hooked them from the get-go, as did inspecting 300-year-old pottery shards and artefacts from a recent dig.

Next on our itinerary, we snagged a ringside table in the Monaco’s courtyard for the best show in town: Doggy Happy Hour, which takes place 5–8pm Tuesdays and Thursdays from April to October  (weather permitting). Between table-hopping to meet and greet a variety of breeds, from smooth-coated Chihuahuas to yappy Jack Russells to slobbering Golden Retrievers, the kids sipped lemonade, I downed a local microbrew and we shared (from the hotel restaurant, Jackson 20) shoestring French fries drizzled with cheddar cheese and a chive crème fraiche, fried green tomatoes, and burgers on sweet potato rolls. How’s that for satisfying the basic food groups?

After a short walk to the waterfront promenade to feed the ducks and glimpse DC across the river, we stopped for a double-scoop cone at Pop’s (its super-rich and creamy ice cream is made daily onsite). Before bed, the kids swam in the hotel’s indoor pool with four other munchkins, then they rinsed off in our oversize Jacuzzi. There was no battle at bedtime: they pressed their noses to the fishbowl, said good night to Cindy and Candy –and promptly fell fast-asleep.