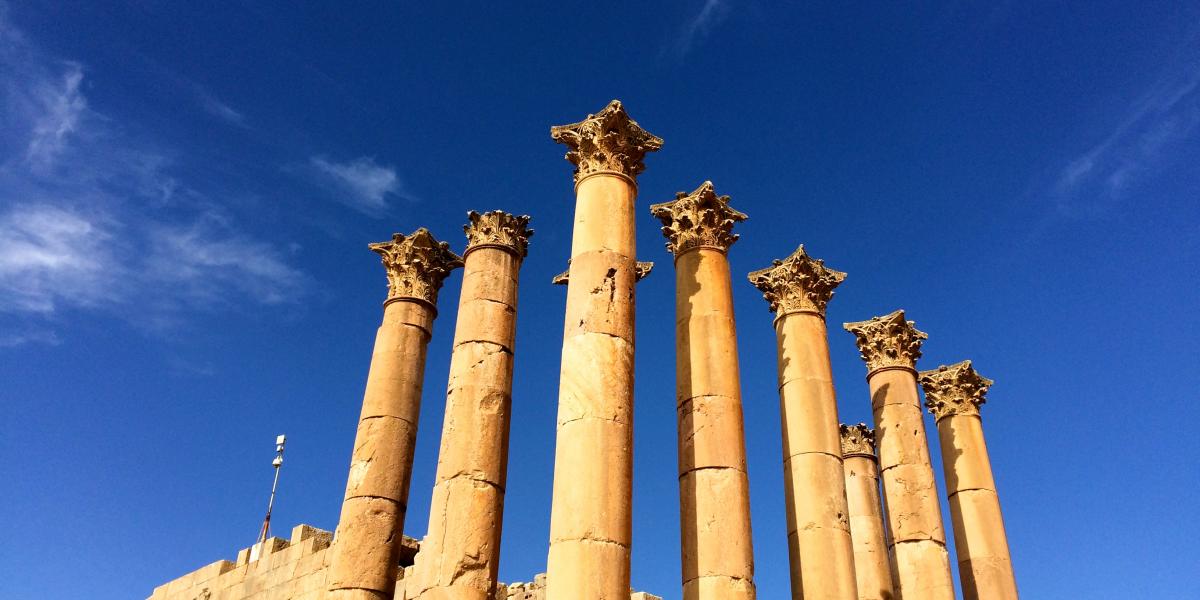 Autumn is a lovely time to visit Jordan; even Petra, which can reach temperatures of nearly 40°C in summer, is a pleasant 22°C – perfect for long, leisurely walks through its swirling rocky paths and spectacular temples.

Our initial plan was to go to Egypt for our half-term mini-break, but as so much of the Middle East is in turmoil right now, Jordan seemed by far the safest bet. It turned out to be a very good choice.

An extraordinary place, Jordan is a desert kingdom, but that desert is alive with history. It’s really worth hiring a guide, because while you’re driving through what seems to be empty desert, a rocky outcrop might turn out to be the ruins of a crusader castle, or the bend of a river the very spot where, archaeologists believe, John the Baptist was baptised.

Even if your children have shown little interest in history so far, the sites cannot fail to impress. In Jerash, an astonishingly well-preserved Roman town, it’s still possible to climb on the stones and sit on the seats in the theatres once occupied by Roman bottoms. With no crowds, we had the marvellous Roman chariot-racing and gladiator show pretty much to ourselves. After posing for photographs with muscular gladiators, their swords still running with fake blood, children are whisked around the stadium in the chariots – a huge thrill. (Editor's note: since the writing of this piece, gladiator shows and chariot rides take place only in the high season: March to May.)

Roman battles, huge castles guarding vast desert scenes, boiling oil drops and rock cannonballs, and stories of knights and daring-do – Jordan offers the best bits of history all at once. And then there’s Petra, one of the most evocative places you’ll ever see. We went in the middle of the day, after a dramatic drive up into the mountains, climbing higher and higher while the children screamed at the drop and competed to see the most camels. The people who built Petra, the Nabataens, were traders who travelled widely and were influenced by the cultures they encountered. Also, the Silk Route went through their land and they became wealthy as a result of trade with the merchants. As a result, temples and palaces here are a mish-mash of Egyptian, Greek, Roman and Persian, with some unique Nabataen forms thrown in. It’s really a Las Vegas of its time – a city built, in the 3rd century BC, in the most inhospitable place imaginable but with skill and beauty.

Petra is a magical, mysterious place and the children picked up on this immediately. As we walked down the stone corridors leading to the famous Theatre, they chased kittens, leapt out of the way as horses thundered past and listened in amazement to the stories our guide told us. In front of the Theatre, my son sat on a camel while a cigarette-smoking, kohl-rimmed young Bedouin took it for a short walk. Petra was full of Bedouin – ‘the men from the movies’, as my son called them. There was Captain Jack Sparrow on a camel; there were the nomadic warriors from The Mummy lounging on their horses. And there, of course, was Indy.

We stayed in a fabulous Babylonian-themed hotel, the Kempinski Hotel Ishtar Dead Sea, with a beach right on the famous body of water, meaning you can stagger out at sunrise for a therapeutic mud bath – or mud sling, depending on the age of your children. Floating gently on this strange sea, staring at the distant rocks of the West Bank in the beautiful soft pink light of early morning, is a surreal but wonderful experience.

Little golf buggies whisk you from room to kids’ club, where children can play in their own stunning pool and get involved in face-painting and clowning while you enjoy the highly regarded spa. The hotel is all long marble halls and date palms, but if you have teens, the fact that Kim Kardashian stayed here is enough to keep them happy. Breakfast is pretty wonderful, too.

Being based at one hotel means you can be independent without having to drag your children around too much. Our day-trips to both Jerash and Petra were perfectly do-able, although in an ideal world you’d book a hotel at Wadi Musa, the gateway town to Petra (we recommend the Movenpick Petra), to have enough time to look around the site properly.