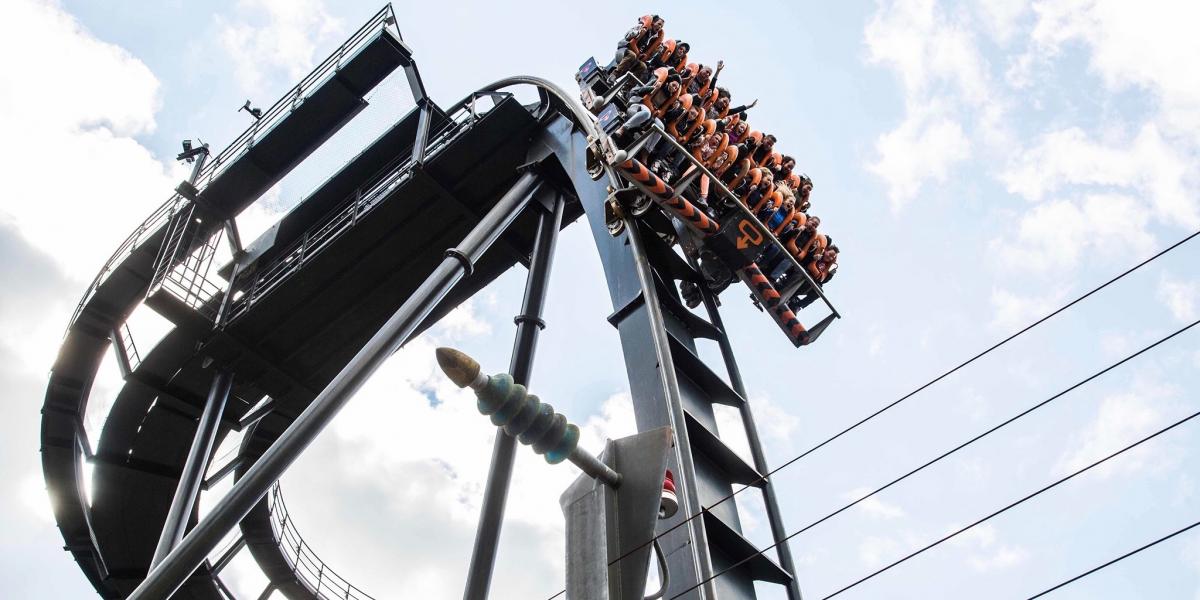 A Review of Alton Towers Theme Park and Hotel

My son had just hit the magic 1.4m mark, meaning he could ride all the big coasters he’s ogled for so long, so our stay at the Alton Towers Resort couldn’t have come at a better time. Set in pretty Staffordshire countryside, Alton Towers stands out not only for its rides but for its gorgeous, well-maintained grounds surrounding a part-ruined Gothic Revival house – if it weren’t for the - attractions, this would make the setting for a lovely day out in itself. As it is, the grounds and house get rather overlooked, especially if you use the Skyride cable-car to get from one end of this vast park to the other.

We went on the first weekend of the school holidays and were pleasantly surprised to find the park relatively uncrowded – I imagine that parents leave the big days out until a bit later in summer. That said, queues for some of the star rides were still quite lengthy (20–40 minutes) so we were very glad of our Fastrack passes, giving us speedy access to many of the busiest.

"Your ‘seat’ tilts forward, leaving you hanging forwards, bird-like, with plenty of opportunity to soar and admire the sky as you undergo two inversions, one of them a 360° double-barrel."

For Ethan, it was a weekend of pure joy as he hopped from one hardcore rollercoaster to another, dragging me or my husband in his wake. Having visited Alton Towers several times in my own youth, I was interested to see the changes time had wrought on the familiar landscape – gone were the rides I’d loved as a child, such as the Corkscrew and the Black Hole, and in their place were even better, and more frightening, coasters.

Having lost my nerve as an adult, my heart raced and my throat contracted as we boarded Oblivion, a vertical-drop rollercoaster – the world’s first – that suspends you over a pit before letting you plummet down into a pitch-black tunnel. This was where the Fastrack system came in handy again – had we had to queue, I would probably have talked myself out of going on at all. Getting straight onto a ride before you’ve had time to properly think about it is really the way to go, at least for wimps like me.

It also means you get time to go on everything you want to. For us, that included several rides on Galactica, which introduced Ethan to the weightless joys of upside-down coasters. On this innovative ride, your ‘seat’ tilts forward, leaving you hanging forwards, bird-like, with plenty of opportunity to soar and admire the sky as you undergo two inversions, one of them a 360° double-barrel.

Where Galactica got Ethan’s top vote over the weekend, mine went to Th13teen, hidden away amidst the trees, so you don’t know what you’re letting yourself in for until you’re actually on it (I won’t tell you any more, as the whole point of Th13teen is its surprises). We were both less impressed by Nemesis Sub-Terra, set beside the famous rollercoaster. Advised for ages 12 and up by virtue of its gory content, this is basically a very short dark-tower dark ride padded out by lots of shouting and staring by live actors.

What really impressed me about Alton Towers was the attention to detail throughout. Walking to Gloomy Hollow, you take a forest path lined by cackling statues and gravestones, while the scary rides up the ante with sound effects tailored to each – pumping music accompanies screens flashing the word ‘Anxiety!’ on Oblivion, while there’s spooky whispering for Th13teen and Rita. The ghost train, Duel, is excellent, too, allowing you the chance to shoot back at animatronic zombies. What I didn’t like at the park was all the ‘extras’ – you can spend a fortune here not only on food and ride photos, but also on elements charging an additional fee, such as the water zorbs.

Alton Towers is definitely best with bigger kids, who can appreciate its thrill rides. But there’s plenty for younger kids too – my youngest loved the Farmyard with its gentle rides and attractions, the Ice Age 4D cinema, and the Charlie and the Chocolate Factory dark ride, culminating in a magical trip in the Great Glass Elevator. For kids still not sure or not yet big enough for the major coasters, there are other rides such as the Runaway Mine Train and the Flume.

We spent very little time in our Explorer Rooms at the Alton Towers Hotel close to the start of the mono-rail ferrying visitors between the car-parks and the theme park. Interconnecting, they could sleep up to nine between them. There are also 12 individually themed rooms, plus a few more themed rooms in the adjoining Splash Landings Hotel, including the Ice Age Room. Movie packages and in-room eats and treats are available, but we ate in the Emperor Grill, the most upmarket of the hotel’s three restaurants, and were very happy with the breadth of choice and quality both for adults and kids.

Two full days in the theme park itself meant that we had no time – or energy – for the Splash Landings waterpark, but we’d already been to it anyway (it’s open year-round, unlike the theme park). Nor, alas, was there time for we parents to try out the spa. But we definitely felt that we’ll return to Alton Towers when the youngest is ready for the bigger rides – and that next time we’ll stay for longer.

At the time of writing, Family Short Breaks at Alton Towers Resort started at £155/room based on 2 adults and 2 under-12s sharing, including an overnight stay, breakfast and dinner, theme-park and waterpark access, and Early Ride Time. Fastrack tickets ranged from £5 to £85pp, depending on the number and nature of the rides.

Staffordshire
Luxury treehouses with hot tubs and family lodges within the themepark resort.
Find out more

Staffordshire
Perfect for family breaks, with themepark access plus a waterpark, golf course and play areas.
Find out more

Staffordshire
Enjoy a world of adventure at this unique themed hotel within Alton Towers Resort in Staffordshire.
Find out more