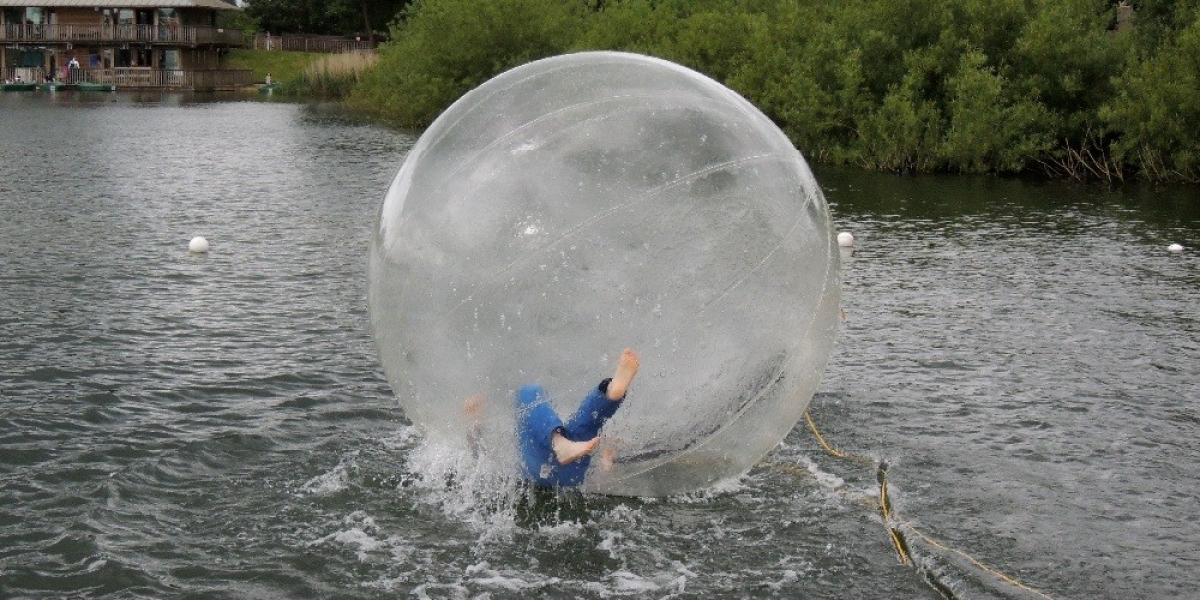 A Review of the Cotswold Water Park

Scrambling about on the surface of a lake within a giant transparent ball like a hamster on a wheel while your parents howl with laughter at your antics may not be everyone's idea of fun, but for my sons Ripley and Ethan it was one of the highlights of a recent visit to the Cotswold Country Park & Beach. Just one of many attractions within the vast Cotswold Water Park – an area of Gloucestershire and northern Wiltshire the size of Jersey, containing more than 150 lakes – the Country Park is an excellent spot for a family day out. In addition to water zorbing (ages 5+), it offers stand-up paddleboarding (18+ only at the time of writing, but soon to change), rowing boat and pedalo hire, two inland beaches overseen by lifeguards (one specially for toddlers), play areas, lakeside walks including a fossil trail, and awesome chainsaw sculptures of local wildlife including dragonflies. There's also bike hire, an aerial adventure course, and, on one lake, outdoor pursuits including windsurfing, raftbuilding, bushcraft and much more besides.

That the Country Park with all its offerings is only a part (albeit a very popular one) of the Water Park gives you an idea just how much there is to see and do in this aquatic wonderland. Various lakes offer other watersports to those mentioned above, including wakeboarding and waterskiing – Lakeside Ski & Bar is a good choice even with younger kids, since those as young as 3 can try out waterskiing on a skimmer board, and those 6 and up can ride ringos (doughnut shaped inflatables), the Triple-Xtreme (a large disc-shaped inflatable) or the five-man banana.

If you'd prefer to remain on dry land, the Water Park has several nature reserves, picnic sites and a busy program of events, from fossil hunts to outdoor theatre. There are several places to stay here too, including the Cotswold Water Park Four Pillars Hotel roughly in the centre of the Water Park. Although a contemporary addition to the landscape, this hotel – which as well as rooms and suites offers extremely comfortable self-catering apartments, sleeping up to 4 in 2 bedrooms (from £290 for a 2-night stay in low season) – has been sympathetically built in pale local stone. Set on the edge of a lake, it has large windows and plenty of wooden decking that allow you to make the most of the views over its reed-fringed lake with its swans and other birdlife. This decking extends to terraces for both the brasserie and the pub-style Old Boathouse with its family-friendly, all-day dining from a Modern British menu. The hotel also has two small playgrounds and a small swimming pool in its spa. The pool can get busy since children's times are limited to certain hours, but in high summer an outdoor splash pool is opened beside it in the afternoons. And the weather gets too wet, even for a Water Park, there's also a games room with Wii, X Box, pool, football and air hockey tables, and giant games.