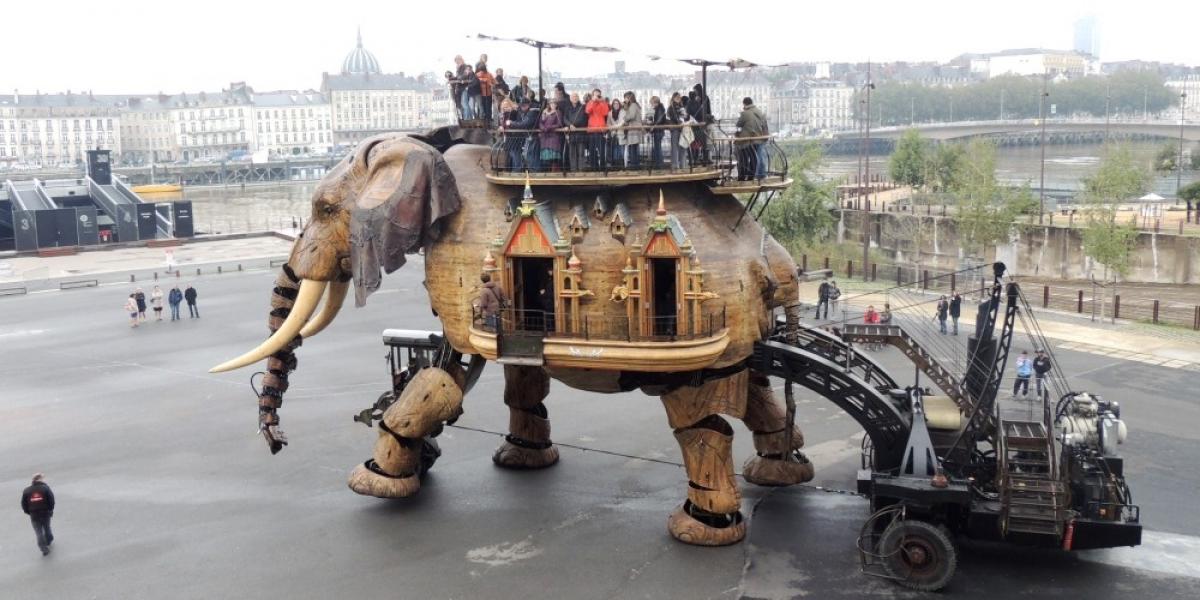 A Review of the Machines de l’Ile, Nantes, Western France

I haven’t told my boys why we’re in Nantes in western France, just so I can enjoy the look on their faces when they spot the giant mechanical elephant. When they do see it, it’s standing still at the end of its hangar, but even immobile it’s breathtaking. What the kids don’t yet know is that we’re booked on the first ride of the day. Yes – this 12m-high, 48-tonne wood-and-steel beauty actually walks!

The elephant is one of the attractions at the Machines d’Ile, an inspiring artistic project on a former shipyard on an island in the middle of the Loire, in central Nantes in the Pays de la Loire. Board the creature and it will take you, at a stately pace, across the former shipyard to the Marine Worlds Carousel, a magnificent, magical and utterly mad three-storey carousel with sea creatures you can ride.

After several turns on a giant crab, a ‘reverse propulsion squid’ and other weird critters, and dodging the jets of water from the elephant’s trunk, we head back to Les Machine’s HQ to see the workshop and gallery where works-in-progress are conceived and displayed. On this visit, we get to see a prototype of the Heron Tree work-in-progress – on these 35m-tall steel hanging gardens, visitors will be able to walk from branch to branch and fly suspended from the wings of two mechanical herons. For the moment, you can watch demonstrations of some of its elements and operate or ride some contraptions yourself.

But Nantes is not all about the Machines – this is one of France’s most exciting, innovative and hip cities, as well as, according to Time, ‘the most liveable city in Europe’. Jules Verne would be proud of his hometown; we pay homage to the science fiction writer at the Jules Verne Museum, which has first editions, old manuscripts and period furniture for geeks but also lots of interactives for kids plus a screening room with cartoon versions of some of his classics.

Other highlights are Le Lieu Unique, an arts centre in a converted biscuit factory, with a tower where the boys operate the Gyrorama, a rotating platform, plus a giftshop full of cool gizmos. Another hit with them is Le Nid at the top of the Tour Bretagne – a bar shaped like a giant stork, with boiled-egg chairs and a squashy body that kids are free to leap about on, like a very chic softplay. For more hipness, head to the Hangar à Bananes, a former banana-ripening warehouse now occupied by galleries, restaurants, bars and clubs.

Nantes looks backwards as well as forwards, of course. It’s home to the first of the famous Loire châteaux, that of the Dukes of Brittany, which houses the Musée d’Histoire Urbain tracing the city’s history from the colonial period and slave trade. Multimedia installations and a family trail keep the boys engaged, although the most fun is to be had haring around the ramparts and moated gardens. The kids also love learning about the natural history and geology of the region in the smallish but delightful Muséum d’Histoire Naturelle.

We eat posh food in La Cigale, an all-day, Art Nouveau brasserie, café and tea-salon, oysters in La Guingette across the river in the colourful artists’ quarter of Trentemoult (hop aboard the Navibus) and mascarons nantais (a sort of chocolate-covered wafer, like an upmarket Kit Kat) from Gautier Debotté, a listed historic monument of a chocolate shop that was a favourite with Jules Verne as a boy.

Our base during our 4-day break is the Adagio Apart-hotel Nantes Centre with well-designed self-catering studios sleeping 4. A Nantes Family Pass, available for 24/48/72 hours, includes public transport, entry to the main attractions and restaurant discounts. Note that the Machines d’Ile closes annually from early January to mid February.