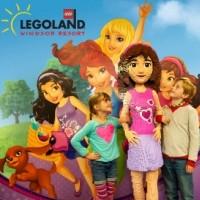 The LEGOLAND® Windsor Resort has announced new developments for the 2015 season, including an improved LEGO® City area with a larger Driving School and a remodelled Boating School. Additionally, there will 10 new LEGO® FRIENDS themed rooms in the on-site LEGOLAND® Windsor Resort Hotel, sleeping up to five peoplel, plus an all-new LEGO Friends area on the resort for early summer, including character meet and greets, a live-action music show and a Heartlake City Mall themed area.

The hotel already has Kingdom, Pirate and Adventure rooms and a LEGO Pirates themed splash pool. The new premium rooms will feature clues hidden in the carpet, allowing guests to unlock their LEGO safe for a special surprise.

Read more about LEGOLAND® Windsor Resort, which opens for the 2015 season on 13 March 2015. Premium LEGO® Friends room packages start at £369 in low season, including two days on the park and breakfast.