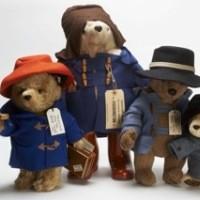 From 4 November until the end of 2014, visitors to London will be able to follow a new trail linking in with the November 28th release of the movie ‘Paddington’ and raising money for charities including the NSPCC.

Fifty 1m-tall Paddington statues designed by celebrities including David Beckham, Bear Grylls, Ant & Dec, Davina McCall, Boris Johnson and stars of the new film, among them Hugh Bonneville, Peter Capaldi, Nicole Kidman, Julie Walters and Ben Whishaw, will be placed at some of London’s cultural hotspots and landmarks, including Horse Guards’ Parade, the Museum of Childhood and Paddington Station. Money will be raised by auctioning off the statues when the trail is finished.

The Museum of London, which will be home to a statue designed by ‘Sherlock Holmes’ star Benedict Cumberbatch, will also be opening its A Bear Called Paddington exhibition on 14 November (until 4th January), with highlights including props from the movie. Free to visit, it will include a family activity space, and, on 29 and 30 November, the Paddington’s Picnic festival with crafts, storytelling, special guests – and plenty of marmalade sandwiches…

Paddington came into being when writer Michael Bond bought his wife a small bear from Selfridges on Christmas Eve 1956, naming him after their closest railway station. In recognition of this history, Selfridges will have a concept store, The Paddington Curiosity Shop, selling mini statues and other memorabilia.